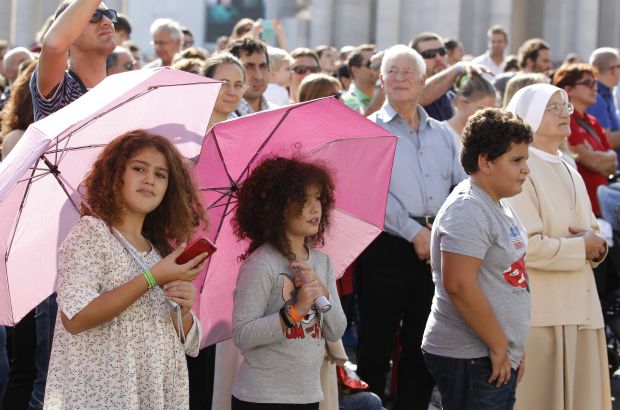 Children watch as Pope Francis leads the Angelus from the window of his studio overlooking St. Peter's Square at the Vatican Nov. 1, the feast of All Saints. (CNS photo/Paul Haring)

VATICAN CITY (CNS) — Saints aren’t superheroes, they are regular people who just never left God’s side after encountering him and his love, Pope Francis said on the feast of All Saints.

“Being a saint is not a privilege of the few, like someone getting a large inheritance. All of us have inherited through baptism the ability to become saints,” he said Nov. 1.

Before reciting the Angelus with people gathered in St. Peter’s Square, the pope talked about God’s call to holiness.

“The saints are friends of God,” he said. But they “are not superheroes, nor were they born perfect. They are like us, each one of us.”

What makes them stand out, he said, is once they encountered Jesus, they always followed him.

“The path that leads to holiness has a name and has a face, it’s the face of Jesus Christ; he teaches us to become saints.”

Jesus shows the way in the Gospels, especially with the beatitudes, Pope Francis said.

Saints were people who followed God “with their whole heart — unconditionally and without hypocrisy; they spent their lives serving others; they put up with suffering and adversity without hatred; they responded to evil with goodness and spread joy and peace,” he said.

The kingdom of heaven is for those who put their trust in and derive their sense of security from God’s love, not material things, he said.

The kingdom is for those “who have a simple, humble heart; who don’t assume to be righteous and don’t judge others; who know how to suffer with those who suffer and rejoice with those who rejoice; they aren’t violent, but are merciful; and they seek to be builders of reconciliation and peace,” the pope said.

Saints always tried to reconcile people and help bring peace to the world, the pope said, and that is what makes holiness beautiful; “it’s a beautiful path.”

Saints “suffered lots of adversity, but without hating,” he said.

“The saints are men and women who have joy in their hearts and bring it to others. Never hate, serve others — the neediest, pray and be joyful, this is the path of holiness.”

The pope said the saints’ message to women and men today is to “trust in the Lord because he never disappoints.”

“He’s a good friend who is always at our side,” he said.

With the example of the way they lived their lives, the saints encourage all Christians “to not be afraid to go against the tide or to be misunderstood and derided when we speak about (Jesus) and the Gospel.”

After praying the Angelus, the pope asked for a moment of silence and prayer for the more than 90 people from Niger, most of them women and children, who died from hunger, thirst and fatigue while trying to cross the Sahara desert, heading to Algeria.

He said he also was praying for “victims of violence, especially Christians who lost their lives because of persecution.”

The pope greeted the many men and women who ran in the annual 10-kilometer Race of the Saints.

“St. Paul would say that a Christian’s whole life is a race for winning the prize of holiness; you are giving us a good example. Thank you for this race,” he said.