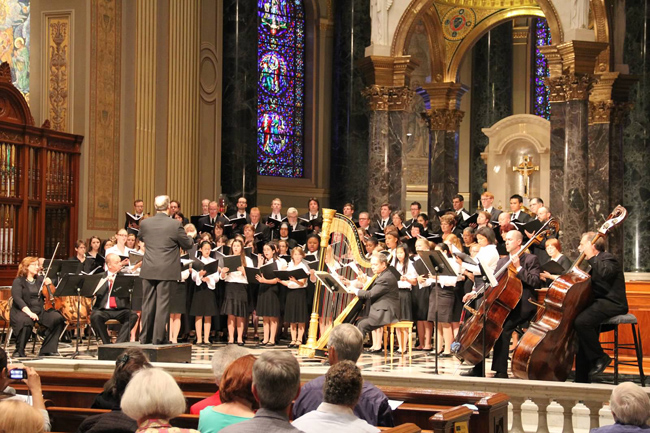 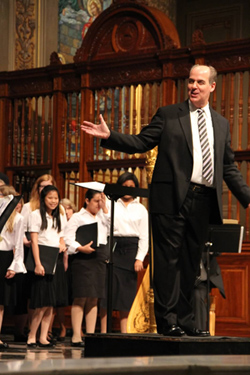 John Romeri, director of liturgical music for the Archdiocese of Philadelphia.

Music is alive and well in the Archdiocese of Philadelphia and at a level of excellence it hasn’t seen in years, thanks to John Romeri, archdiocesan director of liturgical music who is entering his fourth year in the City of Brotherly Love since his arrival from St. Louis.

This was readily apparent Oct. 5 in Washington, D.C., when he took his Archdiocesan Choir and Archdiocesan Girls’ Choir to the Basilica of the National Shrine of the Immaculate Conception for the bi-annual Philadelphia pilgrimage to Mary’s Shrine.

The Archdiocesan Choir, originally formed by Dr. Peter LaManna for the 1976 Eucharistic Congress in Philadelphia and reconstituted by Romeri, has 89 members drawn from 50 parishes. The Girls’ Choir formed by him two years ago has 42 girls representing more than 20 parishes.

This will be repeated on May 4, 2014, when the two choirs once again join together at the Cathedral Basilica for a major concert in honor of Our Lady. The May concert will be similar to the “Lessons and Carols” presentation around the Christmas season, and will include many traditional hymns to the Blessed Mother. It will also feature some of the most beautiful choral pieces written in her honor interspersed with readings from Scripture pertaining to Mary.

Two years ago the major concert of the choirs was a Mass composed by Mozart and last year there was a “Concert from Paris” featuring liturgical music written by French composers.

While both choirs sing at the cathedral throughout the year, “the function of the Archdiocesan Choir is to provide music for special archdiocesan Masses,” Romeri explained.

Also at times, the Cathedral Schola, a smaller professional group drawn from the Cathedral Choir, will sing; for example at the Red Mass for the legal profession and the upcoming “Magnificat Day” Nov. 9 at the Pennsylvania Convention Center.

Romeri also oversees training sessions for cantors and musicians for parishes around the archdiocese as well as “chat and chew” sessions with music directors.

Another important service he has provided is attracting major choral groups to the annual concert series he has instituted at the Cathedral Basilica.

First up this year will be the Choral Arts Society of Philadelphia, which on Nov. 17 will perform “St. Nicholas,” a cantata written in 1948 by the late English composer Benjamin Britten and now presented in honor of his 100th birthday. Joining with Choral Arts for this program will be the Archdiocesan Girls Choir.

The second presentation this year, and probably the highlight of the season will be a Dec. 10 concert by the Tallis Scholars of London, world famous for their presentation of Renaissance sacred music.

Next, on Dec. 15 the Philadelphia Singers will give their annual “Christmas on Logan Square” program in the cathedral. This year’s theme, “Christmas across America” will feature Lauridsen’s “O Magnum Mysterium” and Susa’s “Carols and Lullabies: Christmas in the Southwest.”

On Jan. 29, Sequentia, another British group that specializes in medieval music, will present works from Hildegard von Bingen, a 12th century composer, mystic and doctor of the Church.

On Feb. 7 Vox Ama Deus, a Philadelphia group that focuses on music from 1575 to 1825 and utilizing authentic period instruments, will present a “Renaissance Candlemas” program.

The American Boy Choir, based in Princeton, N.J., will sing at the Cathedral on March 30.

The final presentation of the concert series will see the Philadelphia Singers return to the Cathedral Basilica for Mozart’s “Solemn Vespers” and Schubert’s “Mass in A Flat.”

“Our motto is ‘Great Music in a Cathedral Space,’” Romeri said. “So much of this music was written for cathedrals, not for dry concert halls.”

For tickets and prices for the cathedral concerts see www.CathedralPhilaConcerts.org. 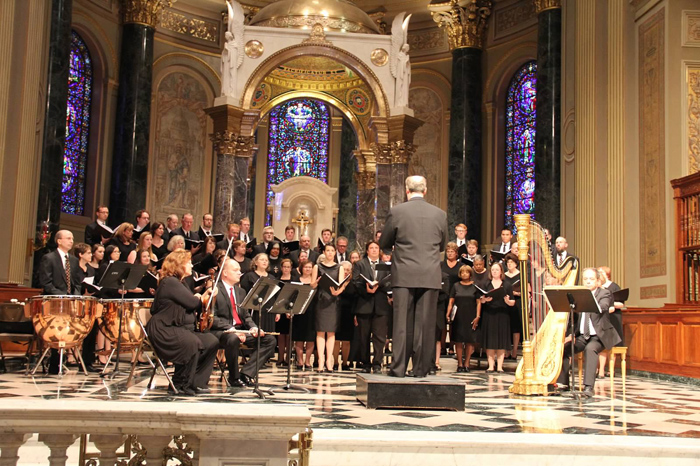