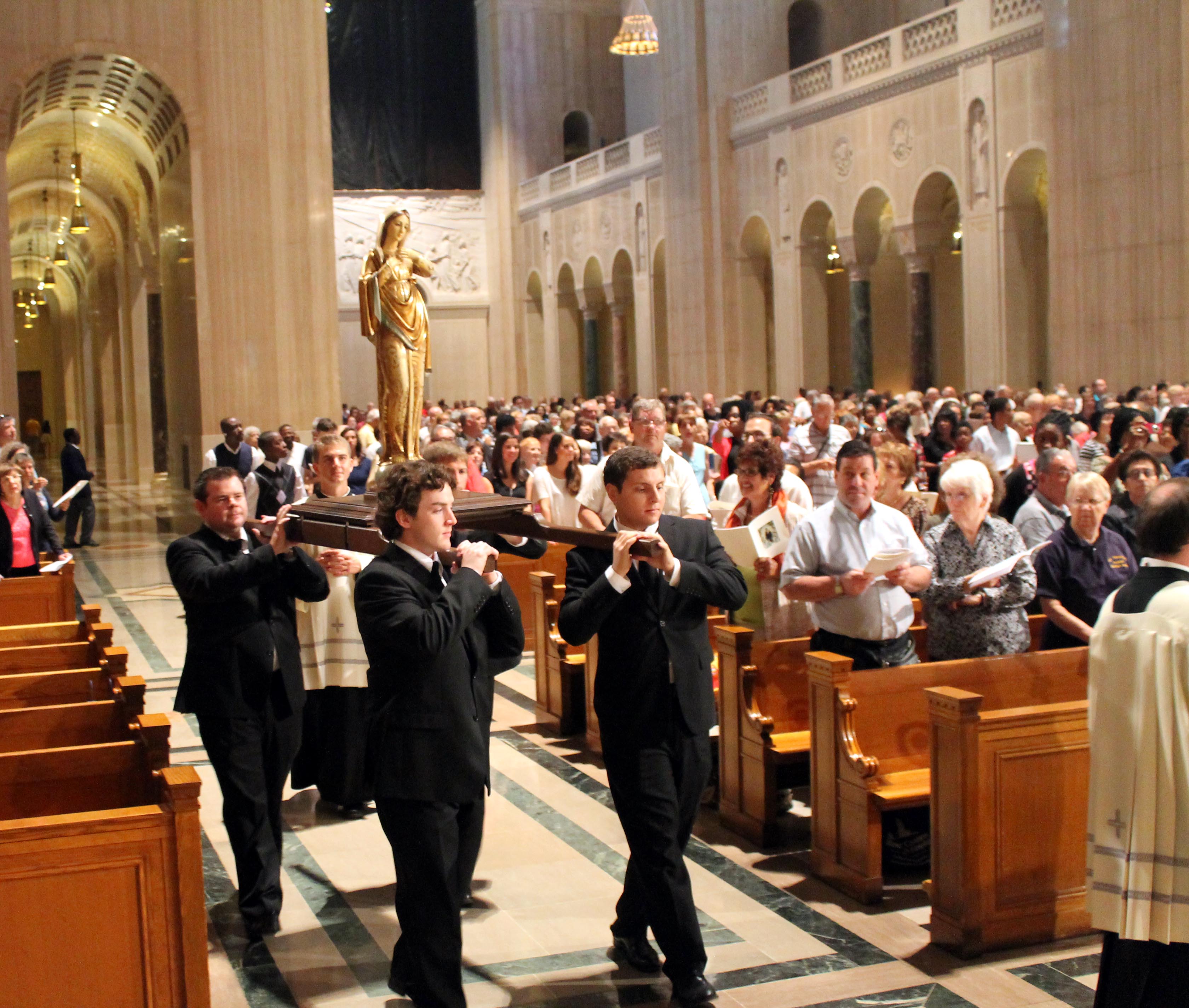 Washington D.C. may have been shut down for most purposes on Saturday, Oct. 5, but Philadelphia Catholics were there anyway for their bi-annual visit to the Basilica of the National Shrine of the Immaculate Conception.

The largest Catholic Church in the hemisphere, it is popularly called “America’s Church” but in reality it is far more than that. With scores of interior chapels and shrines dedicated to the Blessed Virgin as she is venerated in countries around the globe, it would be difficult to find a structure anywhere that more visually portrays the universality of the Church.

In welcoming remarks to the visiting pilgrims, Msgr. Walter R. Rossi took note of Philadelphia’s long tradition of pilgrimage to the shrine and the role the City of Brotherly Love had in its construction, starting with Cardinal Dennis Dougherty, who in the early decades of its planning and construction served as chairman of the building committee for the proposed shrine.

Archbishop Charles Chaput, Cardinal Dougherty’s most recent successor as Archbishop of Philadelphia and celebrant of the pilgrimage Mass in the Great Upper Church of the basilica, also has ties of his own to the basilica.

“I was ordained a deacon in the Crypt Church downstairs and I was installed in the various ministries there – lector, acolyte, porter, there,” he said, explaining this was done while he was studying at a Franciscan seminary in Washington.

“This shrine was built by our ancestors; in fact my grandparents’ names are carved on the wall downstairs,” he said. “It was an effort on the part of the Church in the United States to put a shrine in our nation’s capital to Mary, the mother of Jesus, who is also our mother.”

Catholics from around the Philadelphia Archdiocese traveled to Washington by bus, train and automobile. 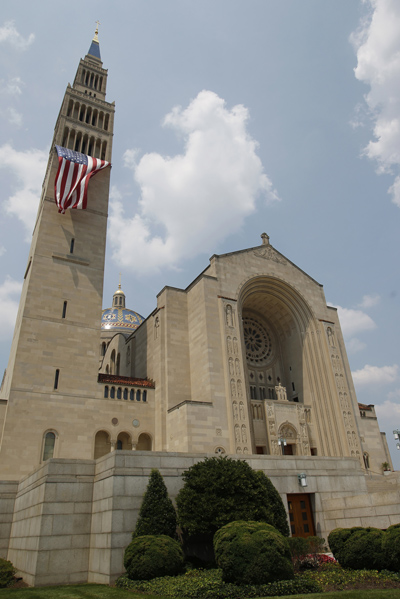 One of the earliest groups to arrive was a busload of 47 pilgrims from St. Peter the Apostle Parish and the Shrine of St. John Neumann in Philadelphia, led by Redemptorist Fathers Alfred Bradley and Matthew Allman.

Florence McCormick, who was one of 42 pilgrims who travelled from St. Ephrem, Bensalem, said her parish came on the pilgrimage a couple of years ago but she comes to the shrine fairly often with her son. “It is so super, I would come every day if it wasn’t so far,” she said.
The official events of the pilgrimage began with a noon welcome, an Opening Prayer and Penance Service led by Bishop Timothy Senior followed by an opportunity for confession.

Interestingly, there was a noticeable difference between the oral prayers of the service and the printed program book. In this portion the program concentrated on an examination of conscience by listing no less than 59 ways one might violate the Ten Commandments given by God to Moses. By contrast the oral liturgy focused on the Beatitudes given by Jesus to his disciples, speaking of the sins of omission when we do not help our brethren in need. After the service long lines of pilgrims received reconciliation from the priests and bishops attending the pilgrimage.

Eileen Brennen, a member of Sacred Heart Parish, Manoa, who traveled to Washington with a bus from Our Lady of Perpetual Help, Morton, received the sacrament of reconciliation from Archbishop Chaput.

“This was the first time I ever met him,” she said. But she is no stranger to the shrine itself. “I come for contentment,” she explained.

In addition to confessions there was ample opportunity for touring the shrine as well as Adoration of the Blessed Sacrament. At 2 p.m. there was a procession and traditional crowning of a statue of the Blessed Virgin, led by Bishop John McIntyre.

Throughout this service and the other services there was musical accompaniment beautifully provided by Philadelphia’s Archdiocesan Choir and the more recently formed Archdiocesan Girls Choir, which was conducted by Dr. John Romeri, archdiocesan director of liturgical music.

“It is a real privilege and a beautiful experience to be here,” said Helen Jauregi, who is music director for Christ the King Parish in Philadelphia and a member of the Archdiocesan Choir since its inception.

The Archdiocesan Choir “is a great group,” she said. “John Romeri has taught us a lot since he came to Philadelphia; he has helped us to grow in our ministry.”

The next event was a rosary led by Bishop Michael Fitzgerald, with Catholics from various walks of life leading the individual decades of the Joyful Mysteries.

Immaculate Heart Sister Mary St. Mark, who still has a lovely hint of the brogue of her native Ireland, led the recitation of the first mystery. She came to Washington with a busload of pilgrims from St. David, Willow Grove.

“The shrine is beautiful with gorgeous art,” she said. “It is certainly uplifting of mind, heart and soul.” 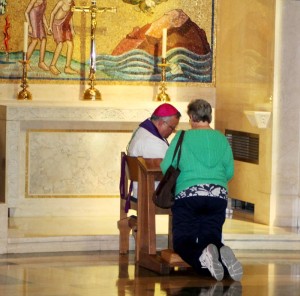 Many of the pilgrims, to be certain of a good view, patiently waited long ahead of time in the Great Upper Church for the culminating Mass instead of strolling around.

Among such a group from St. Timothy, Mayfair, was Debra Marino, visiting the basilica for the first time. “I don’t want to leave, it is so beautiful,” she said.

A fitting closure was that final Mass, with Archbishop Chaput as the celebrant, assisted by his auxiliary bishops and priests.

This was the Mass of Mary, the Mother of the Church, and the archbishop reminded the congregation of her role, quoting from a prayer used during the crowning liturgy: “In her flesh she was His mother; in her person His disciple; in her love, His servant.”

We, the archbishop said, “because we are fellow Christians with Mary, also learn from her how to become in our persons disciples of Jesus.”

How many pilgrims went to Washington? Father G. Dennis Gill, who’s Office for Divine Worship planned the event, estimated there were 2,000.

“It’s wonderful to have so many people as an event in the Year of Faith,” he said, “but I would love it if we had even more people from even more parishes. We are going to start planning for the next one immediately.”

NEXT: Cathedral Concert Series presents music in space for which it was meant