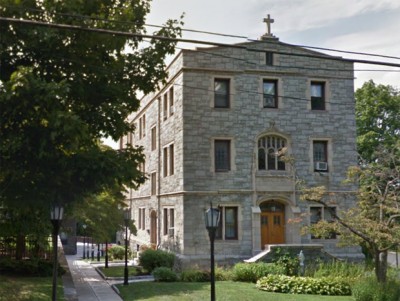 Our Mother Consolation School in the Chestnut Hill section of Philadelphia has been awarded a five-year scholarship grant totaling $100,000 from the Maguire Foundation to assist students with financial needs.

The gift from the foundation is part of the school’s Advancing in Learning and Education Campaign, a $1 million fundraising effort launched in April to support parochial education at OMC.

To date $739,000 has been received or pledged and 20 percent of the campaign fund is pledged for tuition assistance.

“The gift of the Maguire Foundation allows us to expand our tuition assistance offerings and to provide more options for families seeking a Catholic education in a parish school setting,” said Oblate of St. Francis de Sales Father Bob Bazzoli, pastor of Our Mother of Consolation. “Families registered at OMC Parish School can apply for tuition aid from our scholarship fund, as well as through other funding sources such as BLOCS and the Children’s Scholarship Fund.

“The Maguire Foundation’s mission is grounded in the belief (as taught by St. Ignatius of Loyola) that we are men and women for others,” said James J. Maguire, co-founder (along with his wife, Frances) of the Maguire Foundation, and a member of Our Mother of Consolation Parish. “Our focus is to assist children and young adults with an opportunity to benefit from a quality education. We believe this is best achieved by partnering with institutions and families of need by providing tuition, scholarship assistance and grants for education through grade school, high school and college.”

In addition to the Maguire Foundation grant, OMC has received a $30,000 grant from the Connelly Foundation, which will be used to support the extension of the pre-Kindergarten program and to enhance the remarketing of the school to prospective families in the community.

As one of a selected group of schools, OMC was chosen to receive this grant due to the leadership of its school, its strong academic program and the continued stability of enrollment over the past five years.

Enrollment for the school this year is 198; by contrast it was 181 in 2007. The school building by today’s standards has a capacity of 250, and in some grades, there is a waiting list.

Chestnut Hill, where most of the parishioners live, is one of the most affluent areas of Philadelphia if not the most affluent. With a household income three times the city average, one might wonder why the parish school might need outside assistance.
The fact is many Chestnut Hill children go to private academies, both Catholic and secular, and especially in that portion of the parish that is in Montgomery County, children attend public schools.

Only about 30 percent of the children in the parish attend Our Mother of Consolation. There are 118 children from parishioner families and 80 are from such areas as East Falls, Mount Airy and Germantown; most children from out of the parish are not Catholic.

Our Mother of Consolation began to look at enrollment trends and aggressively pursue marketing and fundraising just about the time the Archdiocese of Philadelphia’s Blue Ribbon Commission on Catholic Education was formed.

By the time the final report was issued in January 2012, listing OMC among the schools recommended for closure or consolidation, the school was ready. It presented its blueprint for stability and growth and what is clearly telling is that the classes with the smallest enrollment are now grades six and seven.

Actual cost of education in grade school at OMC is $5,050 per child. The parish subsidizes $1,660 of this for an active Catholic parishioner, $300 for a Catholic non-parishioner and no subsidy for non-Catholics or inactive Catholics.

The subsidy increases for multiple children in the school; for example an active Catholic parishioner family with three children would receive a $7,550 subsidy and non-parishioner Catholic families a $2,325 subsidy.

Tuitions for preschool are somewhat higher depending on the age of the child, length of the day and numbers of days attending.

Our Mother of Consolation, in addition to academics, has a huge array of extracurricular activities and proudly showcases them to prospective student families.

NEXT: Charges of sexual assault against priest dropped after death of accuser