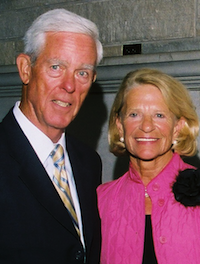 James and Frances Maguire, founders of the Maguire Foundation

James J. Maguire Sr. made a great deal of money in the insurance industry, all the while raising nine children with his wife, Frances. Now that he is retired after selling his firm, Philadelphia Insurance Companies, he and Frances are spending a great deal of money through their Maguire Foundation to ensure children of modest means can obtain a quality education and hopefully be on the road to success themselves.

The private foundation currently is making grants totaling approximately $6.4 million annually. It has recently established the Maguire Scholarship Program, which serves “Families in Need” who choose to educate their children through private grade school, high school and college.

“There is no better American investment today than to educate our students and teach them to believe what they are and to help them become what they believe,” James Maguire said.

It starts early with the students in grades five through eight at the 14 Independence Mission Schools, which now operate independent of their former parishes. The Maguire Foundation has pledged $2.5 million over the next five years, in the form of 500 annual grants of $1,000.

“The rationale is to support education starting with middle school,” explained Amy Holdsman, who joined the Maguire Foundation as executive director a year ago.

The second tier is the Catholic high schools operated by Faith in the Future, where a total of 125 students will receive $2,000 scholarships annually to support them through four years of high school, or a total of $2.5 million over the next five years. Each of the 17 archdiocesan high schools and Mercy Vocational School are guaranteed at least six of the annual scholarships through the program.

In order to qualify the students must demonstrate financial need, meet academic benchmarks, actively participate in school activities and illustrate involvement in their communities. The scholarships may also be open to students who graduated from other Catholic schools that are not part of the Independence Mission School group.
“It is not necessarily the same children; ideally yes, the Independence Mission School children will have a strong chance of being selected,” Holdsman said.

In the third phase, college scholarships averaging about $5,000 a year will be offered to an unspecified number of students who are enrolled at certain colleges. When the full complement is issued over four years, it is expected about 350 students will be enrolled in colleges through the program.

The college scholarships will be open to graduates of the 18 Faith in the Future Catholic high schools as well as other schools that the Maguire Foundation has been assisting – five Mastery High Schools, St. Joseph’s Preparatory School, Merion-Mercy Academy, Cristo Rey Philadelphia and AIM Academy.

In the case of the community colleges the scholarship would be approximately $1,000 a year. In all instances these are “last dollar” scholarships, the recipients must first apply any grants from the college, other grants and loans, and $5,000 from their own or the family’s resources before receiving the Maguire grant.

“It is really intended to make certain every student will be able to attend college,” Holdsman said.

While all of the above will go a long way in assisting Catholic schools in the Archdiocese of Philadelphia to remain viable (see how the foundation is helping one parish school), they are by no means the sum total of the generosity of the Maguire Foundation. Possibly its largest gift so far is $15 million to St. Joseph’s University, which was applied to the purchase of the former Episcopal Academy property to enlarge the campus. A recent gift to St. Joseph’s was $2 million toward the $10 million purchase of the archbishop’s residence by the university.

It is also especially generous to schools for children with disabilities. James Maguire knows well the challenges these children face, because he himself had a learning disability through most of his school career. It was not until he was at St. Joseph’s College that he was diagnosed with dyslexia, something he overcame thanks to the patient mentoring of one of his Jesuit professors.