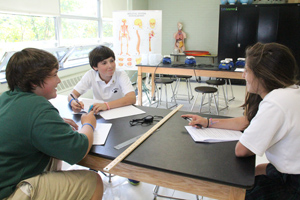 It seems almost as predictable as the falling of leaves. Each autumn brings a new list of Catholic schools that have closed their doors or consolidated with another school or schools.  Faced with ever-rising education costs and the emergence of free charter schools, it becomes more and more difficult to compete.

Maybe that isn’t necessarily so, and you have to only to look a bit north to Allentown to find a diocese that is bucking the trend.

It wasn’t always that way — up until three years ago the Allentown Diocese had 15 straight years of declining enrollment and was down to about 12,000 students system-wide. Last year the streak was snapped and enrollment was up by 120, according to James S. Friend Jr., Allentown’s secretary for stewardship and development.

It wasn’t a fluke – this year’s overall enrollment was up by about 1 percent. A modest increase certainly, but a big improvement over more than a decade of average declines of five percent annually. Allentown will be quite content if it can grow the system by 3 percent a year into the future.

How did it happen? First of all, Allentown Bishop John O. Barres established a Bishop’s Commission of Catholic Schools (BCCS), which was made up of two school pastors, one college dean of enrollment management, one college accounting professor, one public school grant writer and seven fairly aggressive business CEOs, and that latter group may have been key. If you want to sell a product, listen to people who know how to sell products.

There were no school staff members on the BCCS for the simple reason that marketing is not their expertise. Also among the participants in the turnaround at some of the schools was the South Jersey-based Healey Education Foundation, which works with dioceses and individual schools to promote programs to sustain Catholic schools into the future.

The first item on the agenda was recognition that Allentown Catholic schools were a good product but they just were not being effectively marketed. The proof of the quality is results.

Utilizing Pennsylvania Department of Education data, the Allentown Diocese trumpeted the fact that 97 percent of its graduates went on to a four-year or two-year college. Allentown Central Catholic High school sent 99 percent of its grads to college, in comparison to a dozen other high schools in its area that averaged between 86 percent and 57 percent college-bound grads.

Academic success and Catholic values were the emphasis of the marketing program, according to Friend, and this was done not only through billboards but also direct mail, bulletin inserts, lawn signs, banners, a website and college matriculation graphs.

The high college admission rate was publicized through billboards that also mentioned a sweetener – there were transfer grants of up to $3,000 for students who transferred into the Catholic schools.

Tuition grants were strategically focused especially on what was termed the airplane model. When airlines have empty seats on a plane they tend to discount them to fill it. If a school had empty seats in a particular grade, that’s where the aid was more likely to go.

At this time Allentown has 8,770 students in elementary school, 3,531 in high school and 118 in special education.

“We have seen this increase in the past three years to $2.5 million,” Fromuth said. “About 2,400 families are assisted by EITC and OSTC, and schools may have endowments which also help. We have also formed committees to look at how we can reduce expenses for example in group buying programs and group waste management programs.”

The overall enrollment increase is really a team effort that allows the educators to do what they are trained to do and the marketing and financial experts to focus on enrollment, Fromuth emphasized.

NEXT: St. Francis Country House staying true to its mission of care, after 100 years