Persons with disabilities mark 50 years in retreat group at Malvern 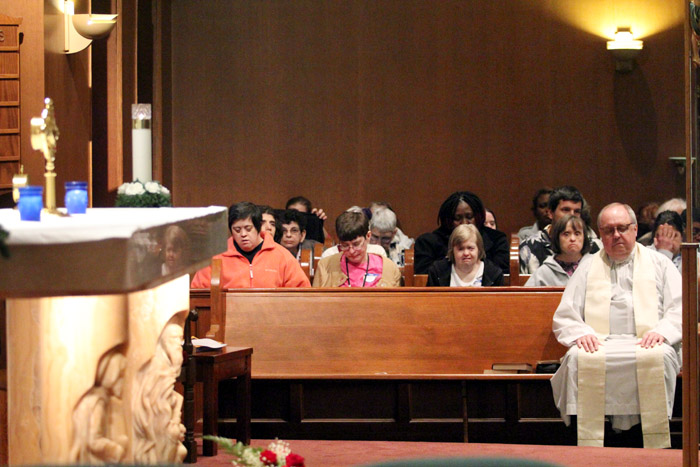 Servant of Charity Father Dennis Weber prays with participants of the Our Lady of Confidence Retreat Group, celebrating its 50th year Oct. 8-10 at Malvern Retreat House. Father Weber served as retreat master for the group along with Msgr. Richard Bolger. (Photos by Sarah Webb)

It is fitting that this year as Malvern Retreat House, America’s largest retreat facility, celebrated its centennial, one of its most beloved retreat groups was having a significant anniversary too.

The Our Lady of Confidence Group for persons with disabilities held its 50th anniversary retreat Tuesday, Oct. 8 through Thursday, Oct. 10. It was also their largest ever, with 110 retreatants along with 31 helpers, or as they prefer to be called, friends. For some it was a return to familiar grounds, for others a first time ever.

For Donna Stine, who lives alone and has crippling arthritis and periodic emotional problems, it was her 12th or 13th retreat, she’s not sure. A convert from Jehovah’s Witnesses, she had her first contact with Catholicism during a time when she was having periodic stays at Norristown State Hospital, where Msgr. Richard Bolger was the chaplain at the time, and she would go to him for spiritual counseling.

Through his influence she ultimately entered a RCIA program and has never regretted it. Now she is also a Secular Franciscan and member of St. Philip Neri Parish, Pennsburg.

“I love the retreat,” she said. “You see people you haven’t seen in a year and you get to know Jesus better. It’s a place where you can grow and be at peace with yourself.”

Michael McGee, a long-time resident at the Cardinal Krol Center, an archdiocesan facility for the mentally disabled, has been attending the retreat for the past 20 years and his reason is straightforward: “I love coming here to pray for everybody,” he said.

Gail McCallum, who has multiple sclerosis and lives in St. Aloysius Parish, Pottstown, was on her third retreat although it had been a while since her last one. 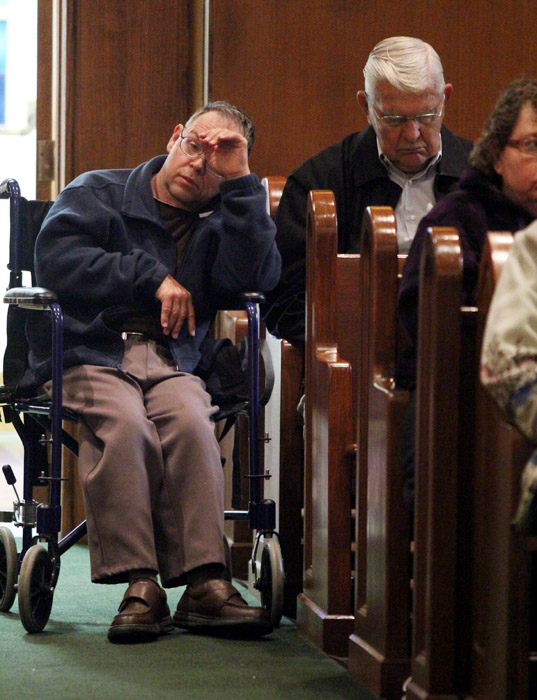 “I thought I needed my spiritual batteries recharged, and I asked if I could come to this, I wouldn’t be able to afford a retreat otherwise. I’m a convert too, and it is the greatest thing I ever did.”

Rafael Nathan and Margaret Meyer are a two-fer. They both live in apartments in the Temple University area, both get around by wheelchair and attend Mass at the Cathedral Basilica of SS. Peter and Paul in Philadelphia. As a matter of fact they are engaged although they haven’t set a date. This was their first retreat.

“My fiancée said, ‘Let’s go,’ so here we are,” Nathan explained.

“I wanted to reflect on God and Jesus,” said Meyer. “I heard about this through the Catholic League for Disabled Persons.”

Serving as retreat masters were Msgr. Bolger and Servant of Charity Father Dennis Weber, who brought 40 men with disabilities from the Cardinal Krol Center in Springfield, where he is chaplain.

“It’s very important, they look forward to coming every year,” Father Weber said. “They see it as a time for prayer, a time to get away and take a time to rest.” 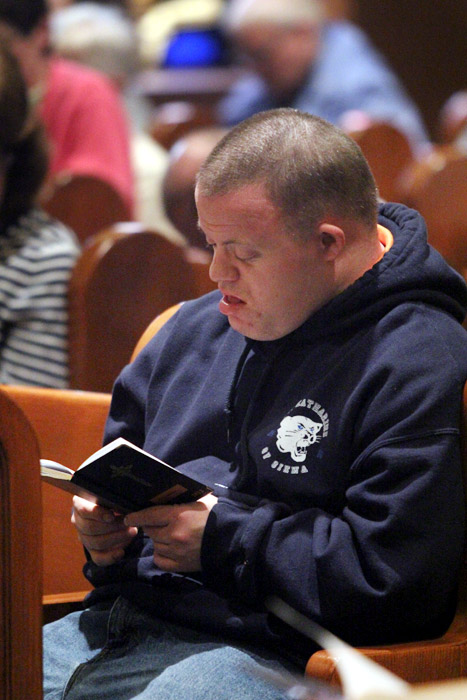 It wouldn’t be possible for them to do this if it wasn’t for the “friends,” who really should be called guardian angels.

Herman Pisacono, of St. Katherine of Siena Parish in Northeast Philadelphia, happens to be one of them. “I’ve been coming for four or five years. I have a daughter with Down syndrome,” he said. “Msgr. Bolger got me involved.”

The captain for Our Lady of Confidence Group, really the archangel, is Pete Shumacher, a member of Corpus Christi Parish in Lansdale. He’s been assisting at the retreat for 30 years, the last 15 as captain.

When he began helping at the Our Lady of Confidence retreat he was no stranger to Malvern. He’s been coming himself for the past 53 years as part of the Holy Week Retreat.

On this retreat, “We have men from the Cardinal Krol Center, women from Divine Providence Village, others from various institutions or on their own,” he said. “Some have mental disabilities others have physical disabilities – blind, deaf, or non-ambulatory — and some are just elderly who don’t feel part of society. I do this just to help these people; help their spiritual life and show that some people care for them regardless of their condition.”