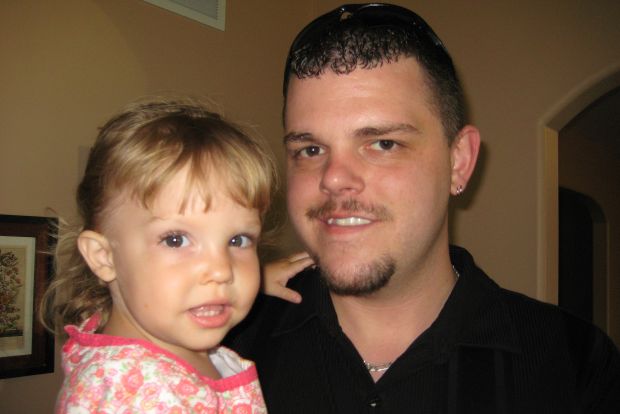 David Mueller, a healthy 31-year-old who died in February after four days of illness caused by Influenza B, is pictured in 2011 with his daughter, Autumn Rose. (CNS photo/courtesy Mueller family)

ALLENTOWN, Pa. (CNS) — “Every Life Matters — Every Shot Counts” is the focus of the Knights of Columbus’ Crusade Against Influenza slated to run in the Diocese of Allentown and beyond concurrent with the flu season.

According to the federal Centers for Disease Control and Prevention, flu activity most commonly peaks in the U.S. in January or February but it can begin as early as October and continue as late as May.

Frank Krakowski, chancellor and past grand knight of St. Theresa of the Child Jesus Council 14990 in Hellertown, said the program aims to foster better heath and save lives in communities and parishes. The Knights set up a flu-specific website for use by participating councils and the public: www.flucrusade.com.

Though the program has been launched in the Diocese of Allentown, Krakowski said the Knights hope it will become a national effort.

The program also is intended as a memorial to David Mueller, son of James Mueller, a fourth-degree Knight, and his wife, Sue. David, a healthy 31-year-old, died in February after four days of illness caused by Influenza B. The Muellers are parishioners of St. Joseph the Worker in Orefield.

“Over the years, the Knights have lost so many members to influenza,” Krakowski told The A.D. Times, Allentown’s diocesan newspaper.

Influenza can be a very serious condition, especially for people in high risk groups — such as people with diabetes, heart disease, asthma and other lung diseases. Mueller wasn’t in one of these groups.

Data shows each year the flu vaccines are approximately 60 to 70 percent effective in preventing or reducing the severity of flu cases.

Krakowski said the Muellers, devastated by their loss, agreed to use David’s story as a motivator for people to become more aware of the danger from seasonal influenza, the risks and benefits of receiving a flu shot, and the importance of making an intelligent and informed decision when it comes to opting for or against getting an annual shot.

All 138 councils in northeastern Pennsylvania were asked to be a part of the crusade by hosting flu vaccination awareness events at their own and at least one other church, Catholic or non-Catholic.

Knights are passing out brochures highlighting the serious nature of flu, and the benefits and risks of flu shots. Seniors will get special brochures. And everybody will receive a knights’ referral document that entitles them to a free “flu-fighting” gift and an approximately $10 discount on their shot, if paying for it out-of-pocket; otherwise it is almost always covered by insurance.

The program is intended to be a subunit of the national Knights of Columbus “Support for Life” objective, extending every council’s efforts beyond the fight against abortion.

Its website contains links to lots of information and includes ways to input a ZIP code and find locations where shots are being given. Occasional tips for fighting the flu will be posted, as well as information on how the project is going. There is a calendar of special events and information on how to make contributions to the flu crusade.

David Mueller’s death “is a prime example of just how vulnerable everyone, even healthy young adults — not just children and the elderly — can be to the flu,” said Krakowski.

“It also reinforces why the CDC recommends ‘everyone 6 months of age and older gets a flu shot each and every year.'”

Mueller, a 31-year-old insurance agent and nursing student at Lehigh Carbon Community College, was bowling with friends on a Friday night and celebrating his birthday. On Sunday, he felt ill, went to the emergency room and wound up in intensive care later that day.

That Monday, he was transferred to the University of Pennsylvania Hospital in Philadelphia for additional heart-lung support. His parents were told if he survived, he would almost certainly need a heart transplant. He died early Wednesday morning, Feb. 27.

Besides his father and mother, Mueller left behind a daughter, Autumn Rose, and four brothers and sisters.

“The Mueller family is looking forward to this program’s success since it will help mean their son David — 31, healthy and in no real serious risk groups and who didn’t think he needed a flu shot — won’t have died in vain,” Krakowski said.

Quigley is a staff writer at The A.D. Times, newspaper of the Diocese of Allentown, Pa.

NEXT: Donations boost efforts to feed the hungry throughout Philadelphia region