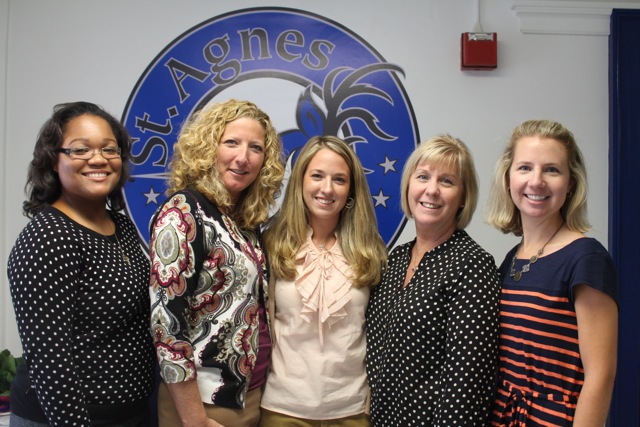 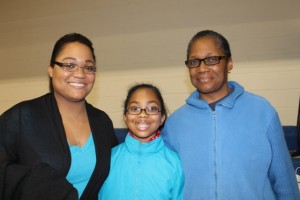 St. Agnes School in West Chester has been proud of its family-like atmosphere since it opened in 1871. But this year it is celebrating how this special characteristic has been going on for generations.

This year, for example, five staff members are alumni and many other families are multi-generational — from two to five generations. Frequently mentioned are the “bonds of friendship” and the “strong sense of family,” as second-grade teacher and alumna Linda Satterthwaite (class of ‘75) put it, or the “home away from home” feel of the school, where “everyone is kind and willing to help,” as school secretary Corinne Hammond (class of ’97) said.

This supportive environment is one where students flourish: in strong Catholic values; in sound principles and morals; and in academic strength. People at St. Agnes care in a way that is not just lip-service but which translates into action. That results in great teaching and engaged learning.

It is not surprising, for example, that in the past 17 years, St. Agnes School has produced 14 Neumann scholars. The school consistently achieves high scores in standardized tests. This year 12 members of Bishop Shanahan High School Leadership Council are graduates of St. Agnes School.

Hodlofski, Nager and Satterthwaite all attest to their education at St. Agnes as the reason they became educators. Hodlofski also testifies to the long family legacy of graduates from the school — her many uncles, aunts and cousins were all St. Agnes Stags. 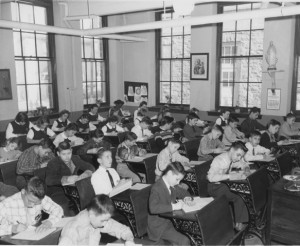 This undated photo shows the crowded classrooms that many graduates of St. Agnes remember from their youth.

“From baptism to marriage, each one of us received all of our sacraments here, and St. Agnes laid the foundation to our strong Catholic faith,” she said.

Families, too, celebrate the fact that St. Agnes has been part of the “family fabric,” as parent Christopher Hayes put it.

Chris’ father, William C. Hayes (class of ’38) attended the school when it was both an elementary and a high school. Their great-grandmother, Mae Steadman Hayes (class of 1900), was in one of the first classes to accept women.

“It says a lot about the principles, values and education offered at St. Agnes,” Hayes said, “that the boys and girls who went there … turn into the men and women of our parish.”

“There were 50 kids to a classroom, and the classes were all taught by nuns,” Nagle recalls of his time at the school in the late 1940s and early 1950s. When he was a student, he coveted a position as a safety, the crossing guard who helped fellow students across the street. He never got the position, but his son Brian did.

The son now thinks it’s equally neat that he drops his kids off at St. Agnes, just as his father did.

They do know that grandfather James was one of seven children, all of whom attended St. Agnes. From those seven children, 33 grandchildren also all attended, along with cousins. They also know that Stella’s great-grandfather Robert J. Cosgrove built the library that is still being used today.

The Hayes, Nagle and Cosgrove families are just three of many who have been at St. Agnes for generations. The Dunleavys and Fernadezes have five generations of Stags, the Cahills, Hammonds and Ruggeris have three.

In all cases, the connection between the past and present that multi-generational families have is a precious one. School secretary Corinne Hammond just started working at the school last year. Hammond, whose Aunt Alice (class of ‘65) works in the religious education department of the parish, feels a sense of nostalgia working there.

Her mother Dorothy (class of ’74) loves coming to Grandparents Day and First Friday Mass. Her daughter Serenity (class of ’17) loves that her mother and aunt work for St. Agnes — she knows that “she is now part of the tradition,” she said.

Today the school continues to thrive under the strong leadership of principal Sister Joan Felicia. The pre-K to 8th grade school offers full and half-day pre-K and Kindergarten programs, iPads and Smartboard technology in every classroom, extracurricular activities from Drama Club to the Chess Club to sports and scouts, Math Honors program, a state-of-the art science lab and more.

But all of this alone is not what brings new families to the school, and has generations returning to it. What sets the school apart is the home-away-from-home atmosphere that alumni remember well and that current students and staff are well aware of: at St. Agnes, strong parent involvement, a strong sense of family and the love of Christ infuse every aspect of the children’s education, making that education one that really works.

NEXT: Students from dozens of Catholic schools get EITC grants