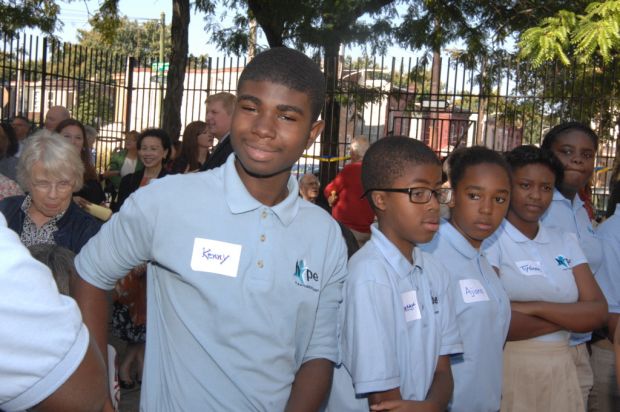 Students of Hope Partnership for Education welcome visitors to the school's new campus at 11th and Huntington streets in North Philadelphia Sept. 20. The school for students in fifth to eighth grades is a collaboration between the Sisters of Mercy and Society of the Holy Child of Jesus. 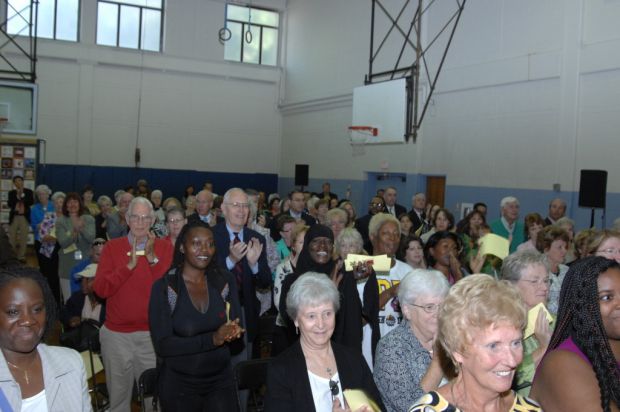 Friends of Hope Partnership for Education and parents of its students gather last month for the dedication of the school’s newly renovated building.

Finding a home can require patience and persistence. One person who knows that firsthand is Mercy Sister Rose Martin, executive director of Hope Partnership for Education.

It took more than 10 years to find a permanent site in North Philadelphia for Hope Partnership, a private nonprofit middle school.

“We expected to find a building to house our ministry more easily than we did,” Sister Rose said. “We identified land through the city’s Neighborhood Transformation Initiative, but there were a lot of pitfalls around trying to build our own building. Ultimately it was at great expense.”

In the spring of 2012 Sister Rose learned that the Salvation Army was selling its building at 11th and Huntingdon Streets.

“We had never looked at a building that suited our needs as much as this building did,” Sister Rose said. “I had some skepticism about what it was going to look like when the renovations were finished, but we’re really delighted with how it has turned out and the space we have to achieve our mission.”

The first phase of the renovation process cost approximately $1 million, she said. “We had to put in a new HVAC system and a new roof on the center of the building,” Sister Rose added. “It was still far less expensive than building our own space.”

The school building was dedicated on Sept. 20, and there are 57 students currently enrolled in grades five to eight.

There is one class per grade, and Sister Rose said the goal is to double the enrollment with two classrooms for each grade. More funding is needed to renovate the additional space, she added.

For nine years Hope Partnership educated middle school students in the R.W. Brown Community Center in North Philadelphia, near Temple University. There are 75 graduates of the school.

Located in one of the poorest neighborhoods in the city, the school is a partnership between the Society of the Holy Child Jesus and the Sisters of Mercy — two religious communities with deep roots in education in the Philadelphia area. 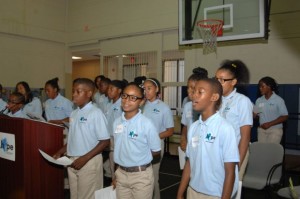 Students of Hope Partnership sing as part of the program dedicating the renovated school building Sept. 20.

The mission of Hope Partnership is to break the cycle of poverty through education. Accomplishing that mission requires a significant amount of fundraising because they must raise $1.4 million annually to operate the school, Sister Rose said.

Despite the ongoing need for fundraising, Danielle Gagnon, who joined Hope Partnership as its development director last December, highlighted the importance of the school in North Philadelphia.

“This is the most economically poor community inPhiladelphia,” Gagnon said. The young people here “don’t have access to the quality education that other communities do, and they are the heart of our mission and who we are called to work with. We can’t think of a better place to be than where we are now.”

A unique aspect of Hope Partnership’s mission is that students have access to a graduate support program during their high school years. “Our students come back to us for tutoring, workshops, social events,” Sister Rose said. “Our eighth graders are helped to apply to high schools that match their potential.”

In addition, adult education classes are offered for those who want to take the General Educational Development (GED) test.

Outreach to the neighborhood is important to Sister Rose, and she has established a relationship with the Police Athletic League, which is preparing the gym for its programs.

The ultimate goal is educating young people so that they become “competent, compassionate individuals who can get jobs and fend for themselves in the world,” Sister Rose said.

Hope Partnership for Education hosts one major “Friendraiser” each year, and it will take place on Friday, Nov. 1 at St. Joseph’s University. The event includes a dinner and silent and live auction. For more information, visit Hope Partnership’s website.