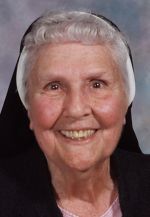 Sister Anne Amrhein, O.S.F., 87, (formerly Sister John Casimir) died Oct. 24 in Assisi House, Aston. She had been a professed member of the Sisters of St. Francis of Philadelphia for 66 years.

Sister Anne was born in Baltimore where she was a member of St. Elizabeth Parish and a graduate of the Catholic High School of Baltimore. She entered the congregation in 1944 and professed her first vows in 1947. She earned a B.A. in education from Villanova University in 1962 and an M.A. in mathematics from Trenton State College in 1977. Sister Anne ministered in education on both elementary and secondary levels.

Sister Anne’s 35 years in the Diocese of Harrisburg included teaching at Lancaster Catholic High School from 1975-1990. During some of those years, she also served as vice principal. When she retired from full-time teaching in 1990, she continued as a volunteer tutor at the high school until 2010. Between 1995 and 2010 she also volunteered at Lancaster Regional Medical Center, serving as a receptionist in both the Women’s Concerns Center and the Spiritual Care Department.

Sister Anne is survived by her brother, Philip Amrhein; her sister, Eleanor Dobyski; sister-in-law Anne Amrhein; nieces, nephews, and by her Franciscan family. Donations in her name may be made to the Sisters of St. Francis Foundation, 609 S. Convent Road, Aston, PA 19014.

PREVIOUS: Sister Apollonia Morelli dies at 97, ministered for many years in N.J.