Sister Apollonia Morelli dies at 97, ministered for many years in N.J. 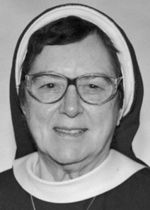 Born Anna Morelli, she was born in Brooklyn, N.Y., and later moved to Jersey City, N.J., where she was a member of St. Aedan Parish and a graduate of St. Dominic Academy. In 1931 she entered the Franciscan Sisters of Ringwood, a congregation that later merged with the Sisters of St. Francis of Philadelphia, and professed her first vows in 1933.

Between 1942-1943 and again from 1944-1949, Sister Apollonia ministered in the Diocese of Albany, dividing her time between St. Mary Parish in Frankford and St. Anthony Parish in Herkimer. During those years she taught religion on both elementary and secondary levels.

In addition to her regular ministries, Sister Apollonia also served in congregational ministries. In 1975 she was director of the children’s camp at Mt. St. Francis in Ringwood. From 1986-1989 she served as a member of the general council for the Franciscan Sisters of Ringwood.

The funeral Mass was celebrated Monday, Oct. 28 at Our Lady of Angels Convent Chapel, Aston. Burial was in Ringwood, N.J. Sister Apollonia is survived by her sister, Rose Schulz, many nieces, nephews, great-nieces, great-nephews and by her Franciscan family. Donations in her name can be made to the Sisters of St. Francis Foundation, 609 S. Convent Road, Aston, PA 19014.