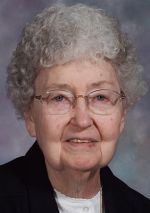 Sister Gabriel Lee, O.S.F., died Oct. 21 at the age of 90. She had been a professed member of the Sisters of St. Francis of Philadelphia for 68 years.

Sister Gabriel was born in Philadelphia, where she was a member of St. Francis of Assisi Parish and a graduate of John W. Hallahan Catholic Girls High School. She entered the congregation in 1942 and professed her first vows in 1945. She earned a B.S. in education from Villanova University in 1962 and an M.A. in religious education in 1974 from St. Charles Borromeo Seminary in Philadelphia. She ministered in elementary education and after her retirement worked as a school librarian.

In 2004 Sister Gabriel moved to Portiuncula Convent in Aston, volunteering with the retired sisters at Assisi House. In 2013 she became a resident of Assisi House and served in prayer ministry until her death.

Sister Gabriel is survived by her Franciscan family. Donations in her name can be made to the Sisters of St. Francis Foundation, 609 S. Convent Road, Aston, PA 19014.

NEXT: Sister Apollonia Morelli dies at 97, ministered for many years in N.J.