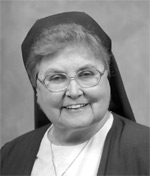 Born in West Chester, Sister Cecile Marie entered the Congregation of the Sisters, Servants of the Immaculate Heart of Mary in 1951 from St. Monica, Berwyn, and professed her vows in 1954.

She taught music in grade school and high school for a very short time and went to Immaculata University in 1959 and remained there in various positions in the Music Department until 2004.

During this time she received a Ph.D. in musical arts. Sister Cecile Marie then went to Camilla Hall and there, along with her Apostolate of Prayer, gave many programs and workshops to the sister patients.

The funeral Mass was celebrated at Camilla Hall Oct. 1. Father William E. Dean was the celebrant and homilist.

Sister Cecile Marie is survived by her beloved sister friends, members of her religious community and hundreds of Immaculata University alumnae who attended her funeral.