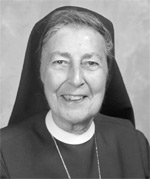 Born in York, Pa., Sister Mary Terentia entered the Congregation of the Sisters, Servants of the Immaculate Heart of Mary in 1941 from St. Patrick, York, and professed her vows in 1943.

She taught in grade schools in the Archdiocese of Philadelphia and dioceses of Camden, Allentown and her home parish of St. Patrick, York, from 1971 to 1977. After teaching religious enrichment for many years at St. Barnabas Parish, Philadelphia, she was assigned to Camilla Hall on April, 30, 2010 in the Apostolate of Prayer.

The funeral Mass was celebrated Aug. 27 at Camilla Hall. Father William E. Dean was the celebrant and homilist. The concelebrant was Father John F. Babowitch, pastor of St. Barnabas. Interment followed in the Immaculata Cemetery.

In addition to the members of her religious community, Sister Mary Terentia is survived by nephews, nieces, and other family members.