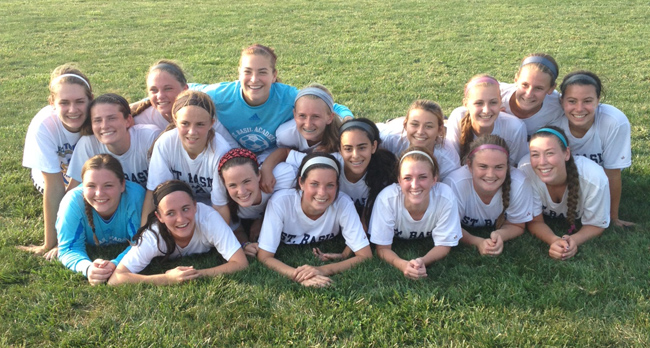 St. Basil's soccer team is smiling again -- they're boasting a solid win-loss record this year after losing every game for the past three years.

Unless you’re an eternal optimist, it would be difficult to look forward to venture number 37. Really, what are the odds that anything will be different?

Fool me once, shame on you … doing something over and over again and expecting a different result is a good definition of insanity….

In the case of St. Basil’s varsity soccer team, both adages applied.

“I wasn’t sure what to expect,” said first-year Basil’s coach Jack Kilroy. “But I know that I was amazed at their attitude, especially the seniors. You never would have known that they had lost every league game for the past three years.

“Right from the jump, they were ready to go. They were excited. You would have figured on just the opposite. But as I have gotten to know this group, nothing surprises me. They know every student in the school. They are flat-out impressive kids.”

A little more than one month has been completed, and St. Basil’s no longer sees the number zero on the left column of the daily win-loss standings. 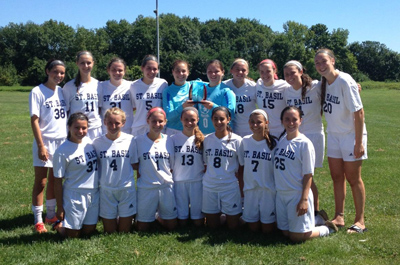 With a few weeks remaining, the Panthers are 7-7 overall; more impressively, they are 3-5 in the Catholic Academies League. As for the expectation of shaking their opponents’ hands while congratulating them on a victory, that is no longer the case.

“When we walk onto the field before each game, we know that we have a good chance of winning,” said Lauren Brogan, a member of Holy Martyrs Parish in Oreland who rotates goaltending duties with fellow senior Courtney Weiss. “We are happier and excited about the outcomes.

“Our confidence pushes us to work harder because we can see a positive end result in our minds. In previous years we wanted to win, but we were not expected to win. This year is totally different. We both want to win and are expected to win.”

“It was one of the best feelings, knowing that we finally got a league win and could build off of it for the rest of the season,” Brogan said. “We felt like all of our hard work had finally paid off.”

“I would say that the whole atmosphere of St. Basil Academy soccer is different,” she said. “Instead of being an easy win for every team we play, we give every team that we play a good hard game. Our new coaches really helped to train us so that we come prepared to every game.

“Getting our first league win was our goal since the beginning of last season, and it was amazing to finally do it before we graduated. The thing that made it even better was that we didn’t stop at one league game. We have won multiple league games.”

In addition to defeating Merion a few weeks later, this time by a 2-1, come-from-behind margin against the obviously improved Golden Bears, Basil’s stunned the area by toppling powerhouse Mount St. Joseph’s Academy, 2-0.

For good reason – especially considering that they had lost to the Mount by an unseemly 10-2 last year.

“I hadn’t known about how badly they lost, and that helped explain their reaction,” said Kilroy, a 1980 graduate of since-closed Cardinal Dougherty High School who parlayed a first-team All-Catholic senior season into an excellent career at St. Joseph’s University. “It was great to see.”

Kaitlyn Brogan added some insights about what it has been like to deal with constant losing and several coaching changes these past few years.

“Every team has looked at us for the past few years as a win, but this year they might not have expected the tough game that we gave them,” she said. “This gives us the expectation of winning every game by not only our coaches but for ourselves as well.”

“This year was different because we had a new positive outlook for the upcoming season,” said Comey, a product of Resurrection of Our Lord Parish in Philadelphia. “Our new coach really motivated us to change the program around. He helped up to realize that if we worked hard enough we could change the SBA soccer program and that is what we did this season.

“Getting that league win was the best feeling ever. The other Academy League teams were expecting the usual slow, unmotivated Basil’s soccer team and that is where we shocked them. We came out with awesome energy and we never backed down.

“I’m most glad because we didn’t just stop at one league win. We are a much more confident team this year and it’s mainly because we have faith in ourselves and that’s what we’ve been lacking for the past three years.

“The past three years we were kind of used to losing every game and it wasn’t a big deal to us. This year is the opposite and it is awesome. Even if we don’t win, we put out our best effort and we are in every game.”

In other words, regardless of the scoreboard, the Panthers have discovered that they’re winners before, during and after the game.

And that’s what high school athletics is supposed to be all about.