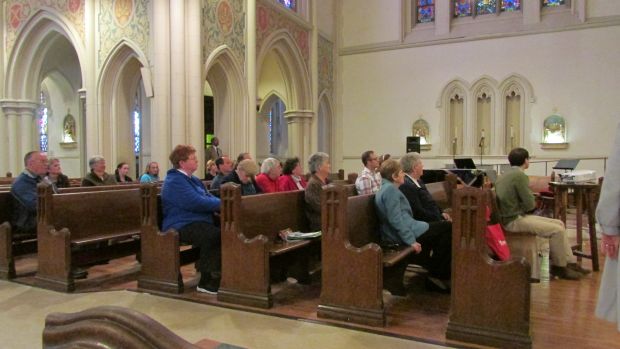 People listen to a presentation on Grace Kelly at St. Bridget Church Nov. 2. Kelly was the East Falls parish's most famous daughter. 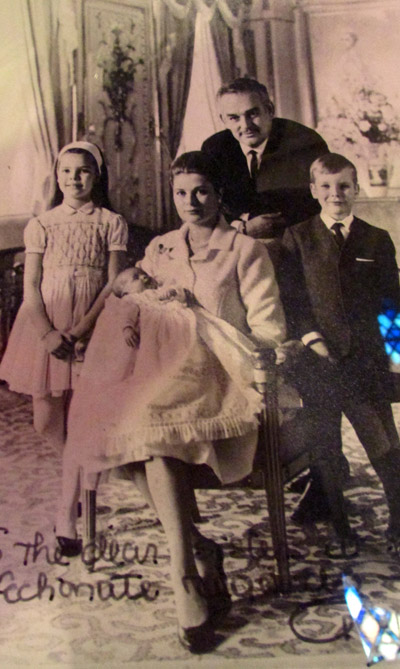 Princess Grace sent a card and signed photo of her family to the Sisters of St. Joseph who served at St. Bridget Parish.

St. Bridget Parish in the East Falls section of Philadelphia hosted a talk by Louise Feder of the Michener Museum in Doylestown on Grace Kelly Nov. 3 at the church.

The parish is part of the Museum’s exhibit on Kelly’s life titled “From Philadelphia to Monaco, Grace Kelly: Beyond the Icon.” It has only one stop in the United States and runs now until Jan. 26, 2014.

Kelly and her siblings were all baptized in St. Bridget Church, and her family was an integral part of the parish’s history. Some current parishioners remember her as a child sitting in the pews of the church.

Grace Kelly was well-known for being a model, a Broadway actress and movie star. During the presentation, parishioners learned about her most important roles in her life:  daughter, sister, wife, mother and parishioner of St. Bridget’s.

Participants at the event learned how Grace Kelly valued her family, her parish and the image she portrayed to the public. The qualities she possessed many decades ago are still very current and visible among parishioners in the diverse parish of St. Bridget.

The former Princess of Monaco remained close with her family. Even after becoming a princess, Kelly came home yearly to spend two weeks in Ocean City, N.J. She would often fly her sisters to her movie sets when she would become homesick. Her motto for raising her children was: the only magic formula for raising children was to give them the love and attention of their mother.

The Sisters of St. Joseph, who have served St. Bridget Parish for the past 125 years, would often be invited to the Kelly family vacations in Ocean City. The current parishioners remain devoted to the sisters, who remain a part of family celebrations, sacraments and serve throughout the neighborhood of East Falls.

Kelly’s parents had always assumed that Grace would marry in her home parish of St. Bridget, however after lengthy discussion it was decided that the future princess would marry in the cathedral in Monaco to show her commitment to her new country.

Her background shaped the way Kelly carried herself in life. She carefully maintained her public image, and she would only be photographed by a few trusted photographers. Although she was a fashion icon, she was often photographed in the same dresses at different events, stating she would rather buy clothes of quality and get multiple uses out of them instead of having a large quantity of clothes in her wardrobe. 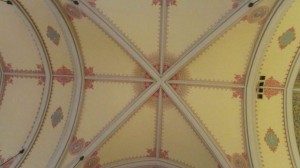 The ceiling of St. Bridget Church was specially painted as a gift of Grace Kelly at the time of her wedding to Prince Rainier of Monaco in 1956.

As a model, she was earning more than any other model in New York City, at the time $400 a week, equivalent to $4,000 a week today. She was most proud of that because she could pay her own schooling and not have to ask her parents for money. Kelly is quoted as saying she was “never happy in Hollywood where everything is distorted by the importance everyone gives to money.”

St. Bridget’s parishioners also place importance on giving the treasure of their time and talent, not just of their financial treasure.

Anyone interested in the history of Grace Kelly is invited to St. Bridget Church for Mass Saturday evening at 4 p.m. and Sunday mornings at 9 and 11 a.m. In addition to the painted ceiling that is a reminder of Kelly’s wedding, there is also a display of the Kelly family in an alcove in the church. 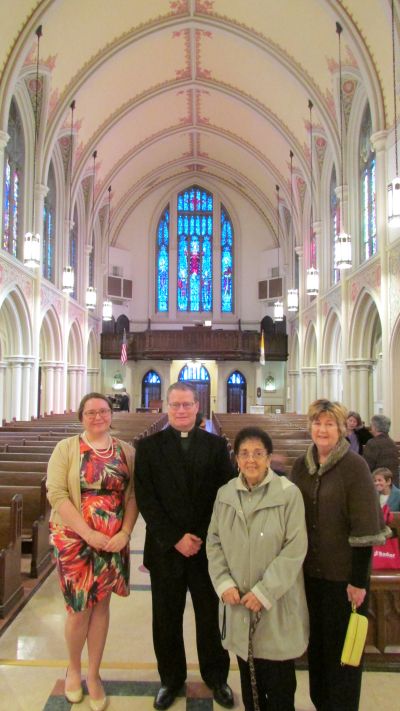 NEXT: Quarter-ton of peanut butter & jelly collected by King of Prussia school