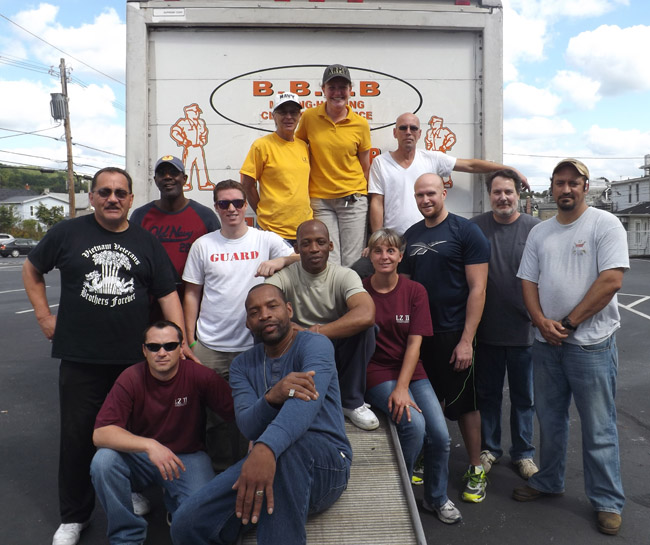 Veterans take a break from working to move equipment and supplies into the Veterans Multi-Service Center, the former St. Cecilia School in Coatesville. 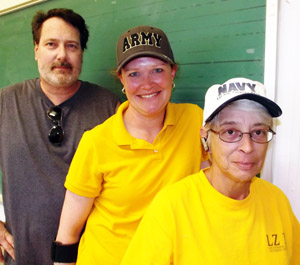 As one ministry diminishes another arises.

At the former St. Cecilia School in Coatesville, Chester County, where generations of Catholic children learned their three Rs along with an all-important fourth R, Religion, their grand old building has been repurposed to serve a more recent cause – supportive services for military veterans with needs, especially in the area of housing.

As of Oct. 1, Catholic Social Services of the Archdiocese of Philadelphia has been subcontracted by the Veterans Multi-Service Center (VMC) to partner with it and provide a Supportive Services for Veteran Families (SSV) program.

Its aim is to help homeless and near-homeless veterans and their families to obtain and keep permanent housing.

The program has received a $1,007,000 grant from the U.S. Department of Veterans Affairs to create coordinated outreach in Chester, Delaware and Montgomery counties.

In proper military fashion Gillen has given the project an informal name: “Operating Base Cecilia.”

Although VMC does provide veteran housing in the Coatesville area, this center is nonresidential, strictly for support. At least half of the employees are themselves veterans. CSS will have four staff on site – two caseworkers, a clinical social worker and a housing coordinator.

The VMC staff, also four members, will include two case managers, one income stabilization specialist and an office manager.

The housing coordinator plays a crucial role because of relationships with landlords not only in Chester County but also Montgomery and Delaware counties, Pytlewski explained.

It is expected the center will serve approximately 200 veterans annually, 60 percent of whom must be homeless and 40 percent in danger of losing their housing.

“CSS sees this as an opportunity to continue to strengthen the family,” he said.

Veterans may be as far back as the Vietnam era or the more recent Middle East campaigns, and while most are men some of them are women.

It’s not just about finding a house or apartment for the clients and handing them a check. It’s a matter of working with them and seeking out the reasons why they are homeless and addressing the problem so they will not be homeless again.

“We walk with them for at least three months and tell them they will always have a place to come for support,” Pytlewski said.

So far it’s a one-year contract and during that time the program hopes to serve approximately 200 veterans and their families.

The two organizations, VMC and CSS, should mesh well. CSS has a long history in social service while VMC has special expertise in this area.

Through Our Lady of the Rosary Parish, which now includes the former St. Cecilia, the building was obtained; VMC is responsible for its upkeep and utilities, and CSS donated all of the furnishing from other closed facilities.

“We are utilizing a vacant property and we are a reenergizing presence in Coatesville and Chester County,” Pytlewski said.

NEXT: Archdiocesan parishes pray for immigrants this weekend