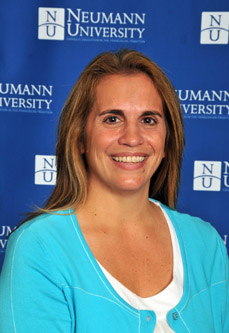 Neumann University has appointed Rosalie “Lee” DelleMonache as director of its Institute for Sport, Spirituality and Character Development. The Aston, Delaware County-based university made the announcement Nov. 6.

Since 2005, DelleMonache has served as the institute’s coordinator for management and planning, and as its liaison with numerous external organizations such as the Association of Catholic Colleges and Universities, the National Catholic Education Association (NCEA), Catholic Athletes for Christ and Beyond Sport International.

DelleMonache’s additional roles with the institute during the last eight years include serving as project manager of the permanent pillar exhibit in the Bayada Atrium, primary author of the institute’s 2012 review and self-study, on-campus organizer of the 2013 NCEA Soul of Youth Sport Conference at the university and coordinator of this year’s Beyond Sport Summit activities at Neumann.

“As director of the Institute for Sport, Spirituality and Character Development, my intent is to contribute meaningfully to the formation of student athletes and coaches as well as to position the institute as the sought-after resource on issues related to sport, leadership and faith/spiritual development,” DelleMonache said.

“As today’s world of sports continues to include ethical and moral challenges, the critical work of the institute is needed now more than ever,” she said. “I view this position as a sacred privilege with much responsibility, first and foremost to Neumann University students, but also to our Church and our world. I am grateful to those responsible for contributing to the inception and growth of the institute. I look forward to building on that foundation and fully realizing the institute’s initial goal of being a locus for academic exploration about the power and role of sport in our world.”

Founded in 1999, the institute is based on the belief that sport possesses an inescapable spiritual and ethical dimension that merits academic exploration and practical application. The institute coordinates the Neumann University’s team chaplain program and commissioning of student athletes, hosts team evenings of reflection and leadership training workshops for coaches and student athletes, and provides credible research and opinion on moral and ethical issues in athletics.

DelleMonache holds a B.A. in English and communications from Cabrini College, an M.S. in sport management from Neumann University, and is currently in the organizational leadership Ph.D. program at Eastern University.

NEXT: Chester County vets battle homelessness from ‘Operating Base Cecilia’