Farrell named head of planning for 2015 World Meeting of Families 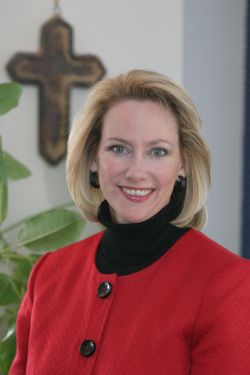 As expectation in the Catholic community builds around the possibility of a visit by Pope Francis to Philadelphia in 2015, the planning for the reason for his trip – the World Meeting of Families – got a major boost Nov. 21 as Donna Farrell was named its executive director.

Now she prepares to lead the effort to welcome perhaps a million people and possibly Pope Francis to the city in September 2015.

“I am deeply honored by this appointment and grateful for the opportunity to be part of such an historic event for the Archdiocese and for Philadelphia,” said Farrell.  “As Archbishop Chaput has noted, the World Meeting of Families will require a great deal of planning, organization and hard work so I am eager to get started and hit the ground running. For everyone in the Archdiocese of Philadelphia and all of those who will visit from around the world, our goal will be an experience that is powerful, grace-filled, and transformational.”

Farrell won’t be an employee of the Philadelphia Archdiocese in January 2014 when she begins her work. She and newly hired event coordinator Jack O’Brien, who reports to her, will work for World Meeting of Families-Philadelphia, an independent entity governed by a board of directors comprised of lay people.

The organization and not the archdiocese will plan and manage the activities of the week-long series of events that focus on the family. The meeting is set to run from Tuesday, Sept. 22, 2015 to Sunday, Sept. 27, 2015.

The World Meeting of Families is held every three years in a different city in the world. The pope traditionally attends the closing Mass of the meeting. Pope Francis is expected to make his first visit to the United States for the Philadelphia meeting, though his presence has not been confirmed by the Holy See at this time.

Nonetheless, “We are planning as though the Holy Father is coming to Philadelphia,” Farrell said.

Close involvement with a papal visit is nothing new for Farrell. She helped officials of the New York Archdiocese with communications work associated with Pope Benedict XVI’s visit to New York City in 2008.

And when she was a student council officer at Cardinal O’Hara High School in Springfield, Delaware County, she was asked to serve as an usher for the public Mass celebrated by Pope John Paul II Oct. 3 on Logan Circle in Philadelphia.

“I was standing at the foot of the altar and was overwhelmed,” Farrell said. “To be involved with (a papal visit) again is … equal parts terrifying and exciting.”

She considers her new position a privilege and “a deep personal honor,” adding the World Meeting of Families in Philadelphia is “a unique opportunity for Catholics or anyone. It’s a special experience for everyone in Philadelphia, the wider region and visitors from around the world.”

While it is too early to speculate how many people might attend the meeting, past experience provides clues. The last meeting in Milan, Italy in 2012 initially attracted thousands from 170 countries to its daily conferences, discussions and liturgies. The numbers grew up to 900,000 as the week progressed and at the last day’s closing Mass celebrated by Pope Benedict XVI, more than one million attended.

That is about the number attending the 1979 Mass celebrated by Pope John Paul II in Philadelphia. The pope would later establish the first World Meeting of Families in 1994.

Farrell said it was also too early to discuss detailed plans for the eighth World Meeting of Families at this time, but she knows she will have to coordinate and fill out committees to organize logistics, liturgies and many other aspects.

“What I will be doing is trying to identify the needs, determine who is out there to assist and be really able to step up and make this the joyful event we know it should be,” Farrell said.

She’ll also need to manage thousands of volunteers to work on meeting events throughout the week. “This is a very big process,” she said, adding that 5,000 volunteers worked during the Milan meeting.

One of her duties that she called “extremely critical” is fundraising. Since the World Meeting of Families-Philadelphia organization will not rely on funds of the Archdiocese of Philadelphia, private fundraising will be the main means of supporting the events for the week.

Robert Ciaruffoli, chair of the board of directors for the organization, praised Farrell and O’Brien, calling their planning work integral to the success of the meeting.

The World Meeting of Families will be a “moment of grace and solidarity for our Church that enriches the lives of all those who will visit the Philadelphia region from around the world,” Ciaruffoli said.

“It’s an opportunity like no other to showcase the uniqueness of this city and all that it has to offer on both a national and international basis. It’s also a tremendous opportunity for evangelization and a blessing for the local economy, which will certainly benefit from this event on many levels.”

Farrell has long experience in religious and secular communications roles.

She called it an “extraordinary opportunity” to work at Independence Blue Cross since late 2012 overseeing public relations and coordinating national and regional media coverage of the largest health insurer in southeastern Pennsylvania.

Prior to that time she served as archdiocesan communications director since 2005, having previously worked in the communications office beginning 1999. Last May Farrell received the papal honor, Cross Pro Ecclesia et Pontifice, (Cross for the Church and Pontiff) for her dedicated service to the church.

O’Brien brings more than 20 years of experience in hospitality, event planning and project management. He most recently served as principal at Manask & Associates and MANASK Hospitality Group, and prior to that at Philadelphia-based ARAMARK Corp. beginning in 1995.

O’Brien managed all aspects of the 2000 Republican National Convention in Philadelphia for ARAMARK.

He said the World Meeting of Families organization recognizes “ an event of this size, scope and importance requires significant work and planning and I am very excited to have been asked to assist in that process.”

He begins his new duties Dec. 2.

NEXT: Marriage, family and some help for Pope Francis