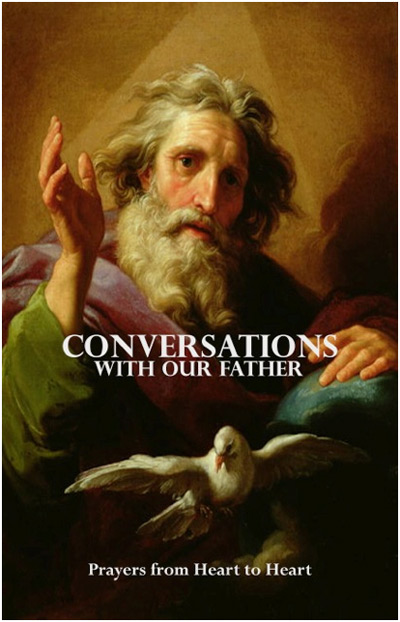 It’s not often that a parish prayer group is so taken by a particular method of prayer that they publish a book about it to spread the word.

The parish is St. John the Evangelist in Morrisville, and the book they have self-published is “Conversations with Our Father: Prayers from Heart to Heart” (66 pp. available from Amazon.com, $7.16).

It’s all about Lectio Divina (Divine Reading), a method of prayer and meditation relatively new to the parish but tracing all the way back Origen, St. Ambrose and St. Augustine and formalized in the 12th century by a Carthusian monk, Guigo II. As a form of prayer and meditation it has been recommended in our time by Popes Paul VI, Blessed John Paul II and Benedict XVI.

Lectio Divina begins with a short reading from the Bible, from which the individual or group will take a word or phrase to first meditate upon then pray upon, and finally, in union with God, contemplate. This may be done on an individual basis or in a group.

Because the St. John the Evangelist group meets weekly on Thursday morning, members utilize the weekend readings, according to Walter Burek, the group’s leader.

It began last year when the parish prayer group did a mini-Lectio Divina as part of a six-week course offered by Ascension Press, according to Burek. It was so well received that, with the permission of Msgr. Joseph Prior, pastor of St. John the Evangelist, eight members of the group initiated a permanent Lectio Divina Group.

Because this is conducted as group devotion at St. John, there is a strong element of faith sharing in it.

As explained in the book: “In lectio we read slowly, attentively – gently listening to hear a word or phrase that is God’s word for us today. In lectio God speaks and we listen.”

In meditatio, the authors write, “Christian meditation calls us to fill our minds with God’s words in an effort to understand it and hear God’s voice…. In meditation we allow God’s word to become his word for us, a word that touches us and affects us at our deepest levels.”

In the third step, oratio, “it is our turn to speak. We continue the conversation that God has begun with our individual prayers – dialogues with our Father as a loving conversation with the one who has invited us into His loving embrace.”

As lectio divina is practiced at St. John’s, this conversation with God is not just between the individual soul and God. It is a shared experience with the group. Each member keeps a journal with the entries both shared and preserved for future reference.

Some of this shared prayer is printed anonymously in the book:

“Lord, let me arise each morning from my bed and know that you are with me.”

“Father, keep me always alert and awake to your Word, your actions and your presence in my life.”

Finally there is contemplation. “We don’t share that,” Burek said. “We take five or 10 minutes and sit in the chapel.”

Because Lectio Divina is so highly personal, “Conversations with Our Father” is not a complete guide but it is an excellent start, and it bears the nihil obstat (stating the book is “without error”) of Msgr. Prior and the imprimatur (“let it be printed”) of Archbishop Charles Chaput.

Since its publication, at least 300 copies have been sold within the parish, according to Burek. The group itself has shown modest growth and is considering adding an evening group for those who cannot come during the day.

“Conversations with Our Father” would be an excellent starting place for other parishes looking to form a similar group, St. John’s pastor believes.

“I thought the book was great and I was moved by it,” Msgr. Prior said. “The prayers were from the heart and they were self-written. The word of God is touching their hearts and they are responding. It is great to see them coming every week.”

Most other formation programs in the parish involve doctrine and living the faith. “This is the complement of prayerful reflection,” Msgr. Prior said. In his own prayer life, although he has practiced Lectio Divina, it was never in a group setting. But however it is done, “I find it helpful,” he said. “The core idea is meditating on the word.”

In the words of Pope Benedict XVI:

“I would like in particular to recall and recommend the ancient tradition of Lectio Divina: the diligent reading of Sacred Scripture accompanied by prayer brings about that intimate dialogue in which the person reading hears God who is speaking, and in praying, responds to him with trusting openness of heart.”

NEXT: Farrell named head of planning for 2015 World Meeting of Families