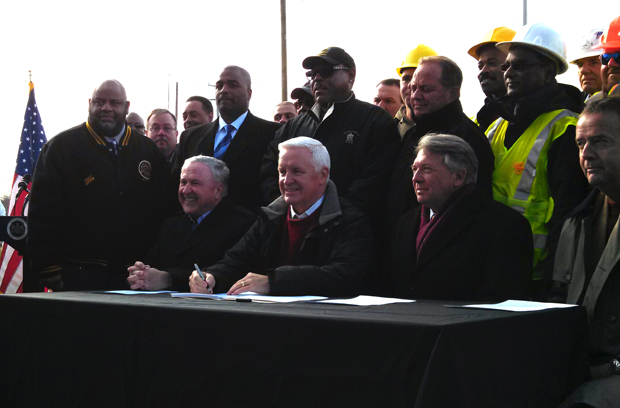 Gov. Tom Corbett used the front lawn of St. Teresa of Avila Church in West Norriton Township Nov. 25 to ceremonially sign a landmark $2.4 billion transportation funding bill that will pay for roads, bridges and mass transit throughout the state.

He had signed the bill into law the day before but stopped in central Montgomery County for the signing ceremony that brought construction workers and union leaders, representatives from SEPTA, community supporters of the bill and numerous elected state and county officials to an area just off the rectory’s front steps.

An active road construction project formed the visual backdrop for the gathering.

Perhaps another reason for the location was the presence of the chairman of the Senate Transportation Committee, Sen. John Rafferty Jr. (R-Montgomery, Chester counties), a parishioner of St. Teresa of Avila Parish and a key legislator who helped pass the bill.

He and Corbett thanked Father Jerome Wild, pastor of the parish, for hosting the ceremony. “This is a temporary inconvenience but a permanent improvement,” Corbett told the priest.

The frontage of the parish property lies along one of Montgomery County’s most heavily travelled roads, Trooper Road. That feeds traffic into Route 422, one of the region’s main traffic arteries. Congestion is common on any given day, including travel to and from the parish church. 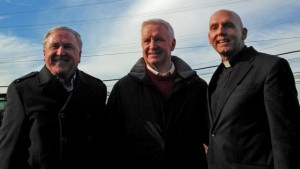 “The need to address traffic is recognizing how vibrant this parish is,” said Father Wild, “and how vital is the mission of St. Teresa of Avila to serve the community and witness to the Gospel, and the larger mission of the church.”

Corbett, Rafferty and other speakers lauded the bipartisan effort to bring the bill to the governor’s desk, despite setbacks over the course of several years. It required support of Republicans and Democrats both in rural, urban and suburban regions of the state, they said.

“This bill connected us across party lines,” Corbett said. “We are one Pennsylvania and we all share these roads.”

Illustrating the governor’s point was state Rep. Tim Briggs (D-Montgomery County), who said, “Democrats and Republicans came together to invest in infrastructure and jobs.”

Although the $1.3 billion in annual funding for state roads and bridges and $237 million for local projects make up the bulk of the spending bill, up to $495 million is earmarked for public transportation that includes trains, buses and trolleys.

This was important to a key legislator such as the House Appropriations Committee chairman Rep. Bill Adolph Jr. (R-Delaware County). In the Springfield area that he calls home, he and residents enjoy close access to public transportation, which eases the burdens on the region’s roads and bridges.

He thanked legislators from Pennsylvania’s rural areas for supporting the bill, even though the funding package requires new taxes and fees.

“People pay taxes, and this (funding bill) is a great investment of those taxes,” Adolph said.

Rafferty in his remarks explained part of the taxation mechanism for the funding plan. The current state gasoline tax of 12 cents per gallon will be eliminated.

Replacing it will be a lifting of the cap on oil franchise fees that could raise the fuel tax 28 cents per gallon phased in over five years, not at once, Rafferty said.

A rise in vehicle registration fees tied to the annual rate of inflation and higher fines on moving violations also will fund the bill.

Rafferty said one need only listen to daily reports of congested traffic on the region’s roads to know new roads and bridges are needed.

“You inked the deal on the most important job-creation bill in a decade here in Pennsylvania,” Montgomery County Democratic Commissioner Josh Shapiro told Corbett.

Over a 12-year span, Shapiro noted, the bill will provide $1.5 billion for road and bridge work in his county alone.

PREVIOUS: Long journey from Africa began with faithful steps and a dream