Long journey from Africa began with faithful steps and a dream

Dr. Richard Mshomba (center, with award) celebrates his award from the La Salle University African-American Alumni Association with his wife, sons and friends. 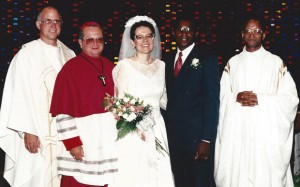 When the La Salle University African-American Alumni Association gave Dr. Richard Mshomba, class of 1985, the Warren E. Smith Award Oct. 25 as an outstanding African-American leader who achieved success in his profession, it was just the most recent of the awards bestowed upon him at the university.

An economics professor and faculty member since 1991, he has previously received the Lindback Award for Distinguished Teaching and the Lasallian Distinguished Educator Award.

He might as well have received the Horatio Alger Award, because his is a true rags to riches story achieved against tremendous odds by sheer grit and determination and also a helping hand from kind benefactors.

His story begins in the village of Sinon, about three miles south of Arusha, a city in Tanzania (formerly Tanganyika), East Africa. It is not a wealthy country, and his parents were poor even by local standards. They were subsistence farmers with no formal education, mostly feeding their family by the labor of their hands.

From an early age, education was important to him as was religion. The problem was, very few children were selected for secondary school, about 4 percent at the time. 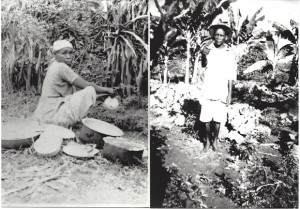 Richard Mshomba’s mother and father, Filomena and Elias Mshomba, were subsistence farmers, shown in the early 1970s in their small village near Arusha, Tanzania, in East Africa.

When he was in sixth and seventh grades (the last years of elementary school in Tanzania) he and his best friend, Alphonce, would rise at dawn, walk three miles to Arusha for Mass then return a mile and a half to their school. Alphonce would pray for a priestly vocation; Richard would pray simply to get into secondary school. The prayers of both were answered.

Alphonce ultimately entered a junior seminary and Richard went on to a four-year secondary school program, after which he continued his education through a two-year agricultural course. He then took a position with the local government but set his sights on a college degree, which was almost an impossible dream.

As an active Catholic, one of those to whom he confided his dream was Germantown-born Bishop Dennis Durning, who as a young Holy Ghost Father, was missioned to Tanzania and became the founding bishop for the Diocese of Arusha.

It was Bishop Durning’s habit to return to Philadelphia for a few months every three years or so, and in 1981 at Richard’s request the bishop took a copy of Richard’s school transcripts with him, with no idea how he could obtain a scholarship for the young man.

By chance, Bishop Durning bumped into an old schoolmate at what is now Holy Ghost Prep who was an official at La Salle. His friend passed the transcripts on to Brother Patrick Ellis, La Salle’s president at the time. Brother Patrick, in consultation with Brother Emery Mollenhauer, the school’s provost, granted Richard a full tuition scholarship. That took care of one problem, but where would he live?

Once more to the rescue, Bishop Durning asked his brother, Charles, and his sister-in-law, Joan, who lived in Glenside, if they would take Richard in.

“They said he can come live with us, and it wasn’t for a weekend, it was until I finished my studies, and to take care of me because I could not support myself,” Dr. Mshomba recalls. “It is amazing how loving and giving some people are. I came to live with them and I became part of the family.”

“We didn’t think it a big deal at the time,” said Terri Durning Connor, the youngest of the six children in the family, who was still living at home, while most of the others were through college and on their own. “Now I know it was a big deal; my parents were like that.”

“Richard,” she remembers, “was very religious, more so than I was. I think because he was strong in the faith that pleased my parents also. He was just a nice guy, easy to get along with. He was invited to all of our family events.” 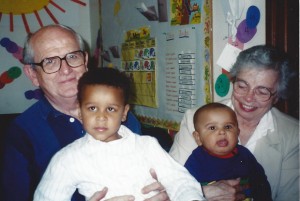 Charles and Joan Durning, who welcomed young Richard Mshomba into their home while he studied at La Salle, hold his sons Alphonce (left) and Charles in this photo from 1996.

It is challenge enough to begin college in a strange country, but Richard also worried because at 27, he was so much older than the other students. “It was quite an adjustment to go back to school as an adult, in a foreign country, no less,” he said, “but I had the best professors anybody could ask for – all of them.”

“He was very serious and very studious,” recalls Vincent Durning, the only son among the six Durning children. “It took a while before we got to know him; he took his work very seriously, but himself, not so much. He really became part of our home.”

Richard had not deliberately chosen to come to America; this is where he obtained a scholarship. By the same token he had not considered economics as his field of study. It was Dr. Richard Geruson who recognized his talent and encouraged him to major in the field. Richard minored in philosophy through the encouragement of another professor, Dr. William Sullivan.

It was there he met his wife, Elaine O’Halloran, who was then a third-year law student. Theirs was a joyful wedding, with many of the Durning clan traveling to Illinois for the ceremony, and both Bishop Durning and Father Alphonce in from Africa, with Father Alphonce officiating.

“Before I met Elaine I thought I was going back to Tanzania,” he said. Thank goodness Elaine loves Tanzania because we go back every other year.”

At any rate, just as he was receiving his doctorate, a position in economics opened up at La Salle and he returned to Philadelphia. He has been teaching at La Salle for the past 22 years, and has been a member of the community for 25 years counting undergraduate studies.

The marriage of Richard and Elaine has been blessed by three sons, and in each case the family returned to Tanzania for the baptism. Alphonce and Dennis were baptized by Bishop Durning; Father Alphonce baptized Charles. The bishop, who officially retired from his see in 1989, remained as a pastor in Tanzania until his death in 2002. 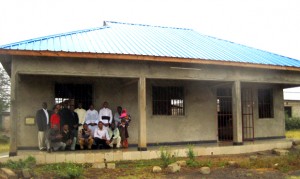 The Mshombas are building free library in Arusha, shown here Aug. 3, 2013 after a blessing by the local Catholic pastor, which they hope to complete next year.

All three of Richard’s principal benefactors — Bishop Durning, and Charles and Joan Durning — have gone home to God. Joan, whose death was the most recent, would be visited in her last year by Richard, just to talk and pray together.

“When someone is entrusted with a great deal, of that person even more will be expected,” St. Luke tells us. Richard and Elaine (a teacher of Swahili at the University of Pennsylvania and Bryn Mawr College) give back through visits to Tanzania every other year, where in Arusha they are building a free library, which they hope to complete next year.

“Most of the work we do is in education and it is on a family level; we don’t have a foundation or anything,” he said. “Just Elaine and I do what we can. We have some support from her parents; they were the ones who encouraged us to build a library.”

Faith remains a focus of the family — grace before meals, night prayer and attendance at Mass as a family is their usual routine. They generally attend Mass at St. Athanasius Church, where Richard is an extraordinary minister of Holy Communion, and all of the boys in turn have been altar servers.

Richard usually attends daily Mass at La Salle or in the summer at Our Lady Help of Christians Church, Abington.

He thinks back to his childhood and those three-mile walks to church. “Now I can walk to Mass just a hundred yards from my office,” he said. “Look how good God is.”