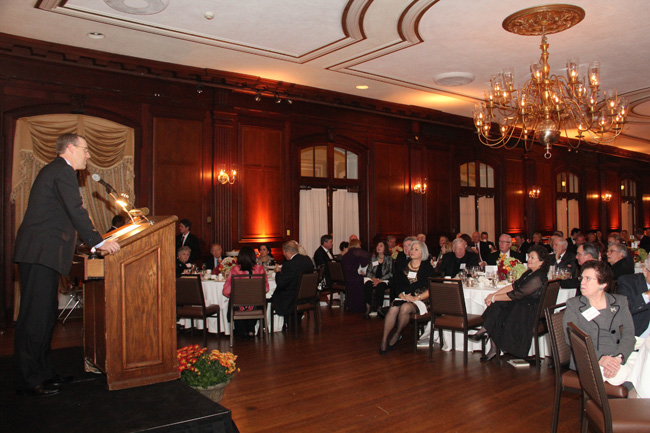 Dr. Timothy Gray delivers the keynote speech for members of the Philadelphia chapter of Legatus, which is celebrating its 25th year, at a Mass and dinner Nov. 12 at the Union League, Philadelphia. (Photos by Sarah Webb) 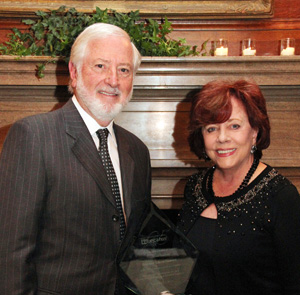 The Union League of Philadelphia was founded to support Abraham Lincoln’s second presidential election and for most of its century and a half it’s been a bastion for Protestant Republican gentility. It would not seem to be a likely venue for an evening Catholic Mass. Times change.

The Philadelphia Chapter of Legatus, an organization for Catholic CEOs and other very high ranking executives, has often held its monthly meeting at the Union League, so it was a logical choice for its 25th anniversary celebration Nov. 12.

When you think of a gathering of CEOs, it’s easy to imagine a bunch of rich guys sitting around and plotting for ways they can all become richer. Nothing could be further from the truth in this case.

Legatus meetings, which include the executives and their spouses, consist of an opportunity for the sacrament of reconciliation, the celebration of Mass, a short cocktail session, dinner and a speaker, usually with a faith-enhancing message.

Legatus itself was founded in 1988 in Michigan by Thomas Monaghan, who was raised in a Catholic orphanage but went on to found Domino’s Pizza, a multi-billion dollar chain of pizza shops.

The Philadelphia Chapter was the first expansion outside of Michigan and the organization now has about 75 chapters. Legatus, which literally means ambassador, has as its stated mission “to study, live and spread the Catholic Faith in our business, professional and personal lives.”

The principal celebrant of the Nov. 12 Mass was retired Auxiliary Bishop of Philadelphia Louis A. DeSimone, who extended greeting from Archbishop Chaput, who was away in Baltimore for the meeting of the United States Conference of Catholic Bishops.

Singled out for a special award were Elmer “Bud” Hansen and his wife Eileen because he was the founding chapter president, and in Legatus, members and spouses are equals. 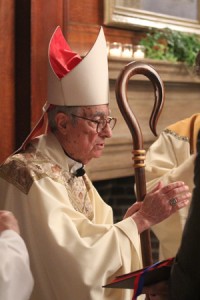 Retired Auxiliary Bishop Louis DeSimone gives the final blessing at a Mass he celebrated for Legatus at the Union League.

Hansen recounted to the group how it came about. In very early 1988 he was in Rome along with Cardinal John Krol and other steering committee members of the newly formed Papal Foundation, which has the sole purpose of financial assistance to the Holy Father. While waiting at the Rome airport for a flight home he met Tom Monaghan, who had also visited Pope John Paul II to explain his new organization, Legatus, which also assists the Holy Father through a donation of 10 percent of all dues collected. “I talked to Tom and was very impressed with him,” Hansen said.

It was the next month, in February 1988, that Archbishop Anthony Bevilacqua was installed as Archbishop of Philadelphia. He had already been approached by Monaghan to serve as ecclesiastical spiritual advisor to Legatus, and the archbishop asked Hansen to try to form a local chapter.

“He was very supportive of me and I had a lot of fun doing it,” he said. “First I went down the list of all of the corporations in Philadelphia and especially Irish and Italian names. When you find one person that leads to another, and by 1989 we had 80 members, not including spouses. We were the fastest growing chapter in the country. It was very vibrant.” 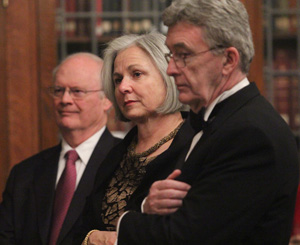 Jackie Delaney and husband Jim, right, are members of Legatus who attended the Nov. 12 celebration, along with member Tim Flanagan, left.

A glitch arose in that it wasn’t too long before the nature of Legatus became publicly known, and some members who headed publicly traded corporations received negative feedback from their boards and shareholders because of the sectarian nature of Legatus.

Many members withdrew over the next few years, and to this day most members are not the heads of publicly traded companies.

But even with the smaller membership it continued to thrive.

“There is a tremendous amount of love and faith at our meetings,” Hansen said.

Also singled out for special honor was Msgr. John Close, who has served as chaplain of the group for most of its existence.

The scheduled speaker for the evening was to be Dr. Scott Hahn, who has an international reputation as a speaker and writer on Scripture, theology and the Catholic faith. Unfortunately he was stricken with the flu and had to cancel several Philadelphia engagements, including the Legatus meeting.

A more than adequate last minute replacement was Colorado-based Dr. Timothy Gray, a founding member of the Augustine Institute and also a widely published theologian.

Speaking of the New Evangelization, Gray said the subject is about God as revealed in Isaiah 43:19, “Behold I am doing a new thing.”

“When we realize it is about God, then we have the Hope of Pope John Paul II, the Faith of Pope Benedict and the Love of Pope Francis,” he said.

While Legatus is at heart a lay organization, its current president, Alvin Clay, is technically not a layman because he is an ordained permanent deacon.

“As a deacon, I have the privilege of living in the world of the clergy and the world of business at the same time,” he said. “I learned soon after my ordination that I can’t leave one behind as I exercise the other. Legatus helps me live that truth out – not just the call of my ordination, but the call each one of us receives at baptism.” 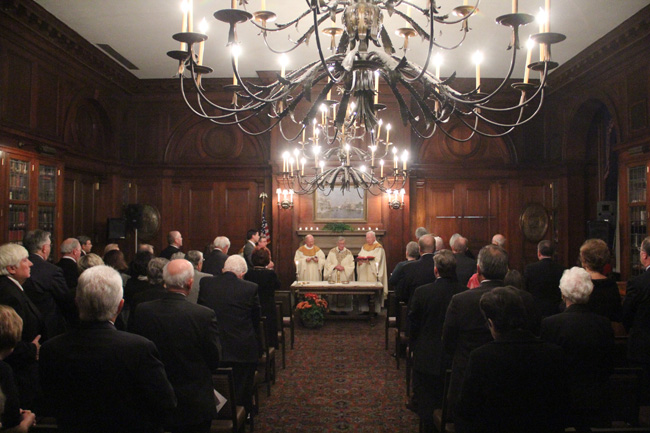 The library of the venerable Union League of Philadelphia hosted Mass, with Bishop Louis DeSimone as main celebrant, for members of the Philadelphia chapter of Legatus.