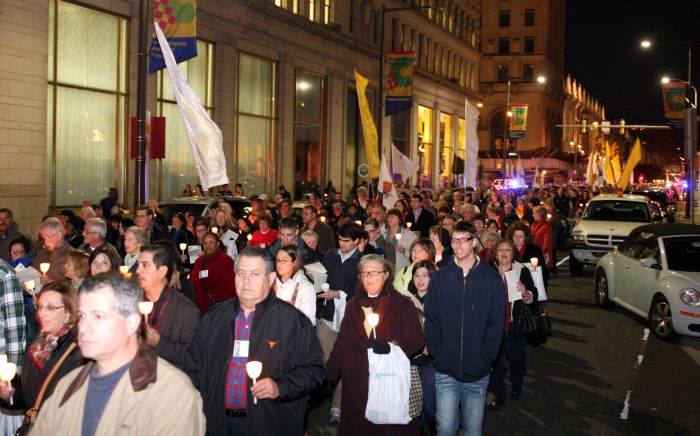 The procession winds through the streets of center city Philadelphia Saturday, Nov. 9. 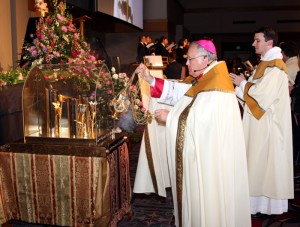 Archbishop Chaput incenses the relics of St. Therese and her parents during Magnificat Day at the Pennsylvania Convention Center.

It was called Magnificat Day of Faith, but could just as easily been called Magnificent Day, because the Nov. 9 event was one the best-run liturgical celebrations in the Archdiocese of Philadelphia since the visit of Pope John Paul II on Oct. 3, 1979.

A program of the Archdiocese of Philadelphia and the Magnificat Foundation, which publishes Magnificat magazine, it was bookended by a 7:15 a.m. Mass celebrated by Archbishop Charles Chaput at the Cathedral Basilica of SS. Peter and Paul then continued at the Pennsylvania Convention Center for a day of spiritual activities and ended with a candlelight eucharistic procession back to the cathedral and an outdoor benediction of the Blessed Sacrament celebrated by Archbishop Chaput.

In between there was ample time for prayer, adoration, confession and presentations by distinguished speakers.

In all, approximately 3,500 overwhelmingly lay men and women plus religious sisters attended the event, mostly drawn from the Mid-Atlantic states and including catechists from the Archdiocese of Philadelphia.

(See many photographs from the day in our photo gallery.)

Ken Johnston, a member of St. Luke Parish in Glenside and president of the organization “Saints Not Yet” was one of the early risers at the archbishop’s Mass.

“His message was, we should not be afraid to share Jesus’ word with friends, relatives and co-workers, everyone we meet,” Johnston said. “We have a story to tell, and we shouldn’t be afraid to tell it.”

The main speaker of the morning was Father Robert Barron, rector of Chicago’s Mundelein Seminary, founder of media ministry Word on Fire and creator of the acclaimed film documentary series “Catholicism.”

His topic was “The Church of Philadelphia: Reflection on Revelation 3:7-12.”

“Usually I speak on a topic of my choice. Magnificat gave this to me,” he explained.

It is to his credit as a speaker that he held his audience’s attention for nearly an hour, while barely glancing at notes despite the novelty of the topic.

The Book of Revelation, written toward the end of the first century A.D., addresses the end times and begins with an admonition by Jesus to the churches of seven western Asian cities, including ancient Philadelphia. In general the words are harsh, but the words to Philadelphia are much more comforting.

“To the angel of the church in Philadelphia: … ‘I know your works (behold, I have left an open door before you, which no one can close). You have limited strength, and yet you have kept my word and have not denied my name.'” — Revelation 3:8.

Kathleen McCarthy, a member of Corpus Christi Parish in Lansdale and president of In His Sign Catholic Radio, termed Father Barron as a priest “filled with holy boldness,” and if his presentations don’t wake the Church up, “nothing will,” she said. “He was dynamic, a great presenter and great preacher.”

On hand to ensure the world at large would be made aware of what was happening in Philadelphia was Eternal Word Television Network.

“This is the first time we have been able to partner with the Magnificat Foundation,” said EWTN’s president and CEO, Michael Warsaw. “It’s a blessing for us to be able to be involved and we are actually televising it globally across our television, radio and online platforms.”

The afternoon speaker was Dominican Father Peter John Cameron, editor-in-chief of the English language edition of Magnificat. His topic was “Faith as Confession.”

Father Cameron’s presentation ended with a dramatization of a spiritually life-altering confession St. Therese of Lisieux made in 1891 to Franciscan Father Alexis Prou. Prior to that her confessors had chided her for presumption in her desire to be a saint. Father Prou assured her this is what God wanted her to be.

“I was intrigued with the scene they did with St. Therese,” commented Ann Marie O’Rourke, it was very impressive.”

A transplanted Virginian living in Beloved Disciple Parish in Grove City, Pa., in the Erie Diocese, O’Rourke was at Magnificat Day along with her husband Paul and children Elaine, Catherine, Aidan, Kieran and Lillian.

“We came here just for Magnificat Day,” she said. “I have been using Magnificat for a couple of years now.”

The theme of St. Therese and her parents Blessed Louis and Zelie Martin was present throughout the day, and relics of the three were venerated in a chapel during the day and carried in the evening eucharistic procession for further veneration at the Cathedral. This should not be surprising because the

Magnificat Foundation is based in Paris.

But there is a Philadelphia connection too. When the cause for the Little Flower, as St. Therese is known, was under consideration in the 1920s, Philadelphia’s Cardinal Dennis Dougherty was its chief promoter outside of France, which explains why so many Philadelphia churches have a statue of St. Therese.

Although Magnificat Day is an event held somewhere in the U.S. every year, the input of the Philadelphia Archdiocese was certainly a factor this year, especially through the work of the Office for Divine Worship headed by Father G. Dennis Gill, and John Romeri, director of liturgical music.

It was a combined effort of the Cathedral Choir, the Archdiocesan Choir, Baroque Music by Tempesta di Mare and the Choral Arts Society of Philadelphia. The music was really the glue that held the entire day together, especially through the sung Liturgy of the Hours with orchestra and excerpts from Handel’s Messiah and other noted composers.

“I was here for the whole day, not just as a Sister but as a Christian,” said Camden-based Sister Katharine of the Little Servant Sisters of the Immaculate Conception. “It was enriching. I like the prayer, all praying together – sisters, lay people. It was wonderful.”

And finally there was that traffic-stopping procession.

“That was great, seeing the sisters; the chanting, the singing was beautiful,” commented St. Charles Seminarian Ivan Ruiz, second-year college. “It was a wonderful day.”
He’s right. C’est magnifique!

PREVIOUS: Archdiocese, CRS to take up collection for Philippines’ relief