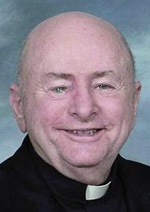 Born in Philadelphia, the son of the late Joseph D. and Mary F. (Devine) Bowen, he was the eldest of six children.

“He was devoted to our family; his brothers and sisters, nieces and nephews,” said his youngest brother, Paul. “He did all of our weddings and baptisms and funerals; he enjoyed being with us. He loved to travel, loved to read, loved the Jersey Shore and had a good sense of humor.”

“We were at the same table at St. Charles and I enjoyed his company,” said Msgr. James McDonough. “He was always joyful and a good talker.”

Later Msgr. McDonough was assigned to St. Laurence, Upper Darby, where Father Bowen had preceded him. “They really appreciated him there and the pastor would speak of what a hard worker Joe was,” Msgr. McDonough said.

Msgr. Francis Schmidt, another classmate, remembers Father Bowen as “really dedicated to the priesthood, a man who did things through faith and perseverance. He took his relationship with God and his people seriously.”

He served as chaplain at Archbishop Wood and Archbishop Ryan High Schools.

In 1985 Father Bowen was appointed pastor of St. Michael the Archangel Parish in Levittown and pastor of Our Lady Help of Christians in 1989. He was named pastor emeritus in 2005.

Nancy Moser, a parishioner at Our Lady Help of Christians, recalls Father Bowen as “a much loved pastor, a great administrator, arriving here at OLHC to a parish in great disrepair because of water damage in our church hall and school gym,” she said. “It took him his first several months to restore our gym and convert our church hall from the dungeon-like space it was into a warm and welcoming meeting place for the parishioners and into a school cafeteria. As a social being Father Bowen had a great sense of humor, especially if the joke were on him!

“As a man of charity, his works were often unheralded. I worked as a volunteer at the rectory for many years, and witnessed Father Bowen admit students from the inner city to our parish school, answering the pleas of mothers wanting to get their children off the street. He was welcomed into our homes, and indeed into our hearts,” Moser said.

Father Bowen is survived by his sister Rosemary Wachinski his brothers Donald, John and Paul, nieces, nephews, grandnieces and grandnephews.

NEXT: Sister Eleanor Francis dies at 95; served in Franciscan order for 73 years