A 50-year love story of faith, trials and generosity 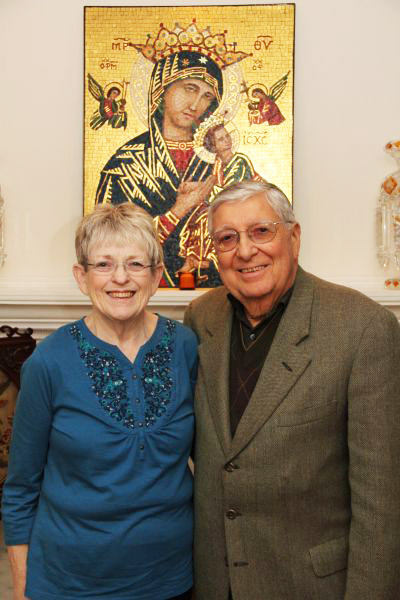 He was 26 and she was 19 when they were introduced by friends on June 22, 1961. Three months later to the day they got engaged and they were married on Dec. 30, 1961, after knowing each other for just a little more than six months.

That’s the way true love really is. Contrary to accepted doctrine, sometimes you just know when you’ve met the person God intended you to meet.

Materially, the years have been good to them. Jim is a former partner in Evans, Conger, Broussard and McCrea and they have an impressive home in St. Andrew Parish, Drexel Hill. They are also members of Legatus, the Catholic organization for executives founded by Thomas Monaghan and of the Stewards of St. John Neumann, a Philadelphia-based group composed of heavy donors to Catholic causes.

Both Legatus and the Stewards are especially appealing to them because the two groups treat members and spouses equally, and in whatever Jim and Marygene do, it’s done as a team.

If fortune has smiled on them, it wasn’t always that way. Jim lost his father at a very early age, and was raised in Girard College. Marygene grew up in a large Irish family in St. Matthew Parish in the Mayfair section of Philadelphia.

Girard College, in Jim’s day, was still operating under the somewhat unusual rules laid down under the will of Stephen Girard, who was the wealthiest man in America at the time of his death in 1831.

He was a non-practicing Catholic and his will specified that no member of the clergy of any denomination could step foot in his planned Girard College, because he believed the boys should be free to make their own religious choices as adults.

When Jim got to Girard College he was one of 1,600 boys and it would be his home for 11 years until he completed high school.

Even though no priest, minister or rabbi could enter the gates, he was free to attend the 6:30 a.m. Sunday Mass at the nearby Church of the Gesu. His mother would actually rise at 4:30 a.m. to travel by trolley for Mass at Gesu even though she was not allowed to sit with him.

Girard College did not have clergy-led denominational religious services, but the program was God-centered nonetheless. There was a two-hour scripture-based service on Sunday morning and a vesper service in the evening. There was daily grace before meals and sometimes after meals, as well as night prayer on one’s knees.

Jim, who received his sacraments at Gesu, came out of Girard College as thoroughly Christian as Marygene did through her parochial school education. After Girard, where he received a solid education in both academic and commercial courses, he took employment obtained for him by the college at the Pennsylvania Safe and Warehousing Co., his first step toward leadership in the business world. 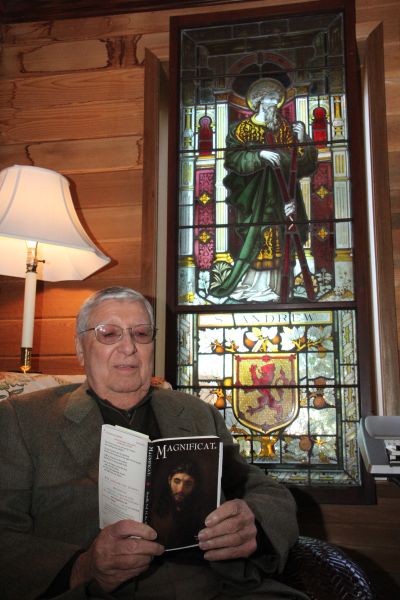 Jim Broussard reads Magnificat magazine in his home in Drexel Hill, where and wife Marygene are members of St. Andrew Parish. (Sarah Webb)

After St. Matt’s Marygene went on to St. Basil’s Academy. Upon graduation she wanted to go to nursing school, but there was no money for that, so she took a job at Lower Bucks County Hospital, where she trained on the job as an x-ray technician and ultimately became chief technician at Nazareth Hospital.

When they married, both Jim and especially Marygene, who was from a family of seven, hoped to raise a large family themselves. When this didn’t happen, they turned to adoption. Through Catholic Social Services they adopted Jeanine, Danielle and Matthew.

When CSS would not give them any more children they started taking in foster babies from Catholic Social Services – newborns that needed placement for a month to six weeks until more permanent arrangements could be made. All told they took a dozen children this way, and then a neighborhood physician put them in touch with a young girl who was having an unplanned pregnancy, and a private adoption was arranged.

Most of the work of raising the children fell upon Marygene because Jim worked very long hours and more often than not he did not arrive home before 8 p.m.

It was not easy for Marygene, especially as it turned out three of the children had learning disabilities.

The very low point for them came in 1985. Just one month after her graduation from the Country Day School of the Sacred Heart, Jeanine, their eldest, was killed in an automobile accident.

To assuage her grief, Marygene started to attend Mass daily, while Jim went into a deep depression.

Ultimately, he too turned to prayer, especially through devotions in Magnificat, the daily prayer magazine, to which he was introduced by fellow Legatus members.

“Prayer has been therapy,” he said. “Now I buy two copies, one for myself and one that I give to other people. I’ve gotten many people to start using it.”

After Marygene had two knee replacements and daily Mass became too difficult Jim took her place and it is still his habit, either at St. Andrew or another church. He follows the readings in Magnificat, and it is still his mainstay for night prayers. Marygene for her part remembers the many people she has known who have died by praying with her large and growing collection of memorial cards.

The Philadelphia Chapter of Legatus will celebrate its 25th anniversary on Nov. 12. As an organization Legatus contributes to no charitable causes other than a tithe of its dues to the Holy See, but the individual members are usually most generous, as typified by Jim and Marygene.

Not long after Jeanine’s death they became involved with Norbertine outreach programs to the homeless at Bethesda Project and My Brother’s House. That means not only financial support, but especially on Marygene’s part, cooking meals and other direct actions.

At the behest of fellow Legatus member, Jack Donnelly, he and another Legate, Bill Curtis, joined together as Friends of St. Martin de Porres to raise funds for St. Martin de Porres School on Lehigh Avenue in North Philadelphia. This outreach was so successful it led to the establishment of the now the 13-school Independence Mission Schools, with the three friends as board members.

Much of Jim and Marygene’s outreach is very personal, whether it is assisting an orphanage in India, shepherding a poor woman from Haiti, assisting a down and out family or helping the Josephite Fathers in New Orleans.

Jim and Marygene are right there, and at times the cost is not money. For example, Marygene’s caring for a sick little one when her own immune system was compromised and contracting the drug-resistant MRSA infection as a result.

Jim hasn’t forgotten the helping hand he received as a child, and now he works to get children admitted to the Hershey School where the mission is so similar to that of Girard College.

“I’m able to give back what Stephen Girard gave to me,” Jim said. “Marygene has been my partner and I could not have been the success I became without her. She was the hard worker.”

The Magnificat Foundation, the publishers of Magnificat, will celebrate Magnificat Day at the Pennsylvania Convention Center on Nov. 9.

Do you have in mind a subject for our Profile feature – a person or couple that is an inspiring witness of Catholic life? Let us know their name, parish within the Archdiocese of Philadelphia and a bit of their story in an email message to editor@catholicphilly.com.

NEXT: Single man, 52, takes leap of faith through adoption