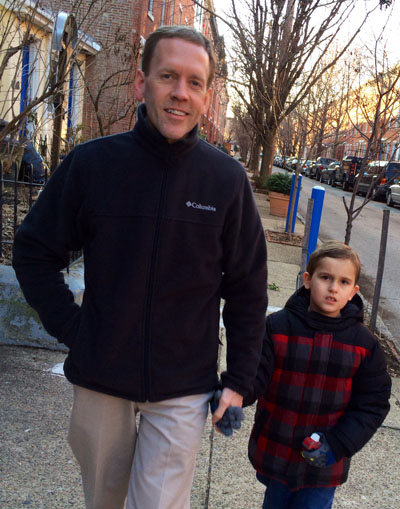 The theme for the Jan. 22 March for Life, the Washington D.C.-based annual rally against the U.S. Supreme Court’s decision to legalize abortion in America, was adoption.

Websites such as adoptus.org outline numerous misconceptions about adoption. These include some people’s belief that their age, race, marital status, income and home ownership will exclude them as adoptive parents.

52-year-old Jim Fitzpatrick, a parishioner of St. Francis Xavier – the Oratory Parish in Philadelphia’s Fairmount section, thought the same, until he researched the process and adopted his new 7-year-old son Reece.

Reece clanked his favorite toy cars together and then pulled a blanket over his head on the couch as Jim chuckled and rubbed his back. Then the boy played a letter game on Jim’s iPad, but he got tired of that. So the two prayed together; Reece watched Jim as he made the sign of the cross and haltingly mimicked his new dad’s “Amen.”

Jim quit his job as a physician to raise Reece, who is autistic, and the two have bonded in the past couple months. They enjoy walks to a nearby Wawa store, which Reece can now spell; trips to see trains, which Reece liked to watch near his foster home; visits to the Reading Terminal Market and the Franklin Institute, and many “runs” to Mass at the Oratory.

“I was coming back from the 6:30 a.m. Mass and I saw Jim and Reece hand-in-hand running down the street for the 8 a.m. Mass just with pure joy on their faces – giggling and laughing,” said Janet Dillon, a friend and neighbor. “They teach us, they show the world, what love is supposed to be like.”

“I didn’t want to do it just for me because I wanted to be a dad to a child who would otherwise have two parents and siblings,” Jim said of his adoption, “but there’s a shortage of parents for children in foster care and there is one more kid being adopted for my having done it.”

Jim realized through his research that older children, sibling groups, children with disabilities or of mixed races are less likely to get adopted. So he made himself a minority.

He offered himself as a non-relative, single male open to older children, mixed race children with or without disabilities and/or siblings. He was also open to adopting out-of-state, which is what he ultimately did.

According to the Adoption and Foster Care Analysis and Reporting System (AFCARS), married couples make up the majority of adoptive family structures at 68 percent. Unmarried couples are the minority at 2 percent; single women account for 27 percent and single men 3 percent.

More than half, 56 percent, of those who adopt children from foster care are foster parents; 30 percent of foster children are adopted by relatives and 14 percent by non-relatives.

AFCARS estimated that in the 2012 fiscal year (which ends in September), 397,122 children were in foster care in the United States, and 101,666 were available for adoption.

As Jim considered adoption he thought about using the Family Medical Leave Act (FMLA), which allows employees 90 days of unpaid leave from work to deal with family situations, including adoption. He realized that adopting an autistic child would require a longer transition period and he was fortunate to be financially able to leave his job so he could help his son adjust.

Jim has helped Reece ease into the routine at St. Katherine Day School, a Wynnewood special education school operated by Catholic Social Services (CSS) of the Philadelphia Archdiocese, and into a support program at St. Joseph’s University’s Kinney Center for Autism.

The two navigated the holidays, meal schedules and taking a school bus. And Jim is there for Reece when he comes home.

“One of the hardest things about autism is social skills – autistic kids don’t naturally make friends,” Jim said. Yet, he has seen Reece “blossom” in a short time, especially with his adult extended family, and younger cousins and classmates.

The long and winding road to adoption

Jim’s journey with adoption began with a vague inspiration in October 2011 when he attended an “Into the Wild” retreat led by the King’s Men, a Catholic men’s group dedicated to the formation of men with an emphasis on ending pornography. The trip to a Virginia state park spiritually enriched Jim who got a strong sense from the Mass readings and homilies “just to be open.”

He had no thoughts of adoption at the time.

“I remember wondering what that could mean – changing jobs, moving to another city,” Jim said. “I didn’t consider that adoption was something someone who was single or my age did.”

Soon after the experience, Jim received an email and saw a website about adoption from foster care. He also watched a TV movie based on a real story about a teenager in foster care who made an appeal to families through his own website. Jim’s heart became open to adoption.

In the winter of 2012, Jim contacted CSS, which eventually helped him find Reece.

In preparation, Jim spent 17 hours of classroom time learning about the foster care system and raising a child with disabilities, for which he felt equipped as a physician. He learned that people in their 50s could adopt older children, so he went through interviews, criminal background checks, a financial review and submitted reference letters. After six months he had an officially approved home study by CSS, and was eligible to adopt.

In the spring of 2013 an adoption selection meeting of case workers and others representing Jim and Reece resulted in approval of the adoption.

Jim met Reece in July 2013. He visited Reece during the summer and took him swimming, one of Reece’s favorite pastimes. He was introduced as Mr. Jim until he made more visits and Reece’s foster mother explained adoption to Reece. In the meantime, a speech therapist helped Reece communicate to Jim via email.

Sharing news of the new arrival

Jim went through his two-year adoption process without telling anyone.

“I was hopeful, but I wasn’t completely sure it would happen until the dates were set,” he said. “I’m a private person; I only told the three people who wrote reference letters until I was certain that Reece was in my home.”

Jim called his parents with the news when he and Reece were on the way to their house for a first-time visit.

“They were surprised, but by the time we got there and they saw this awesome little boy, they just fell in love with him once they attached a face to the news,” he said.

Jim’s friends and siblings had similar reactions; they were stunned, but congratulatory, inspired and proud.

Father Brian Gaffney, C.O., of St. Francis Xavier – the Oratory Parish, has known Jim for 15 years. “When I see Jim at Mass, how paternal he is with Reece, it strengthens my priesthood and shows me how boundless fatherhood can be.

“Jim showing his fatherhood and Reece receiving that in a world where we throw children away…. He sees his son as a gift from God and a treasure – we should see that too.”

“When I see Jim, I see a man who has been changed by love,” said Elizabeth Riordan, a friend and neighbor who has known Jim for five years. “I see the offering of oneself for another. I see the joy that just shines through him in offering himself to be a father to this little boy. It’s a beautiful gift to be on the same block, to see them together – it’s a reflection of God the Father’s love.”

Everyone’s lives are changed, for the better

Reece lived in just one foster home, but most foster children go through a series of homes, staying at some just a few weeks.

“Older kids intellectually know that adoption is a permanent thing, but still go through the testing of insecurity and commitment,” Jim said. “I tell Reece a term that’s often used in foster adoption: He’s now in his forever home.”

Jim advises others considering adoption to get information “to dispel whatever myths they might have.”

He urges them to discover the foster care system and the children in it. “Learn how many kids never get adopted and (their) outlook when they’re not – addiction, crime, prison, psychological disorders,” Jim said. “Even children who are adopted as teens do much better with permanency and love.

“From the faith perspective, the number-one job of parents is to get kids to heaven. More children being adopted from foster care into Catholic families will give all those kids the gift of faith.”

One of the biggest joys for Jim is “seeing Reece happy. When he smiles, he just lights up,” he said. “How different could my life be? Having lived alone all those years, now I’m completely focused on someone else – it’s a big positive; it’s all for the better.”

Erin Maguire is a freelance writer in Flourtown.

PREVIOUS: A 50-year love story of faith, trials and generosity

NEXT: Still smiling after all these years