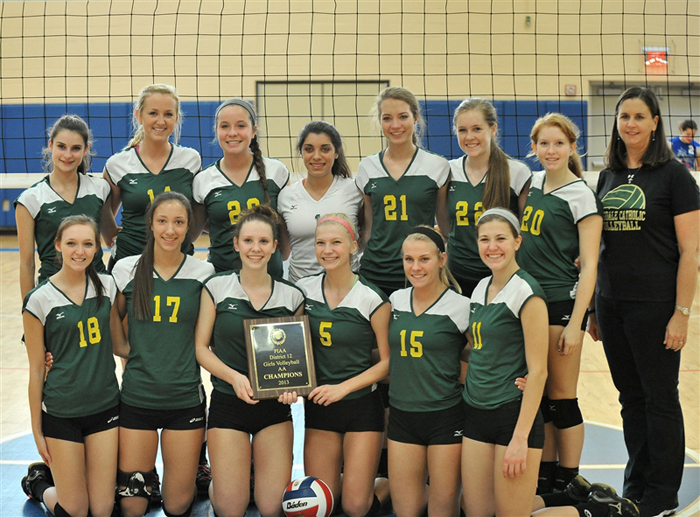 The Lansdale Catholic volleyball team won the Catholic League and PIAA District 12 championships this season before succumbing in the semifinal round of the state playoffs Nov. 12. At right, rear, is third-year coach Joann Pisch.

The girls volleyball program at Lansdale Catholic High School set some high goals this season. The plan was simple: “3, 2, 1, Let’s Get it Done!”

The Crusaders accomplished one of the goals on that list Oct. 27 with their repeat victory as Philadelphia Catholic League champions with a 3-0 win over AA rival Archbishop Wood.

On Nov.1 the team grabbed their third District 12 championship with a 3-0 win over city champion Masterman.

The Crusaders came two steps closer to no. 1 on that list, a state championship, with a 3-0 win over York Suburban in Round 1 of the PIAA state playoffs and 3-1 victory over local AA rival Pope John Paul II in the second round.

But the title run came to an end Tuesday, Nov. 12 with a loss in straight sets to Delone Catholic, which had been the top-ranked team in the state.

Lansdale Catholic aimed high this season and came within a hair of fulfilling all its goals.