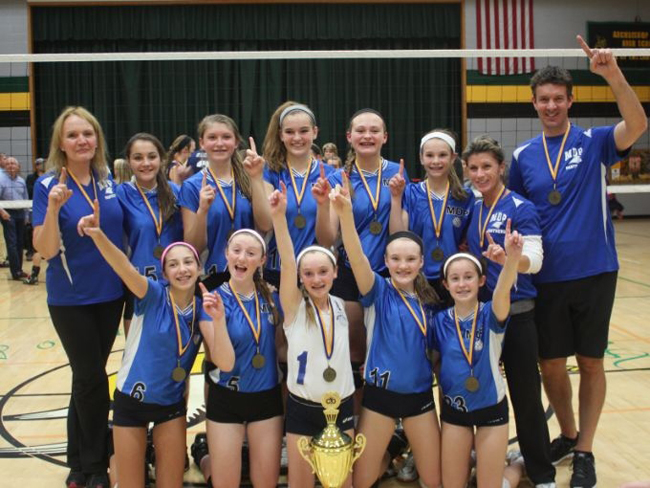 The team earlier captured the Region 21 championship, giving it a first-round bye in the archdiocesan tournament that took place Nov. 2-3. After defeating Holy Rosary, Plymough Meeting, in straight sets, 25-15, 25-15, in the second round, MDP faced a tough draw in Sunday’s quarterfinals against Region 17 champs St. Joseph’s of Downingtown.

MDP had played St. Joseph’s earlier this season in tournaments but had never beaten them. But after losing 19-25 in the first set, MDP’s Lady Panthers rallied to win the next two sets 25-13 and 15-13.

“St Joe’s is a strong team and we knew we would get another chance to play them in the archdiocesan tournament. Our girls have practiced hard to be ready for when we saw them again,” said MDP coach Jerry Abdalla.

MDP faced another battle in the semis against Region 11 champs St. Alphonsus, Maple Glen, which won the first set 22-25. MDP again came back and won the second set 25-14, and advanced to the finals with a 15-12 tie-break victory.

The finals pitted Region 17 powerhouse St. Elizabeth, Uwchlan, against an MDP team that had been tested in the previous three-set matches. MDP dropped the first set 10-25. But as MDP had shown all day, “their determination and never-give-up attitude kicked in again,” said Abdalla.

The teams traded points, staying within a point of each other for most of the second set which saw 22 ties or lead changes. After being tied at 23-23, MDP pulled ahead to win the second game, 25-23.

That set up a championship tiebreak. MDP broke away early to take an 11-5 lead. Then St. Elizabeth rallied to tie it at 11. The MDP girls made a final push to win the rollercoaster, 15-12.

“The day and win was a complete team effort with the girls supporting each other and never giving up,” said Abdalla. “Their coaches could not be any prouder of them!”