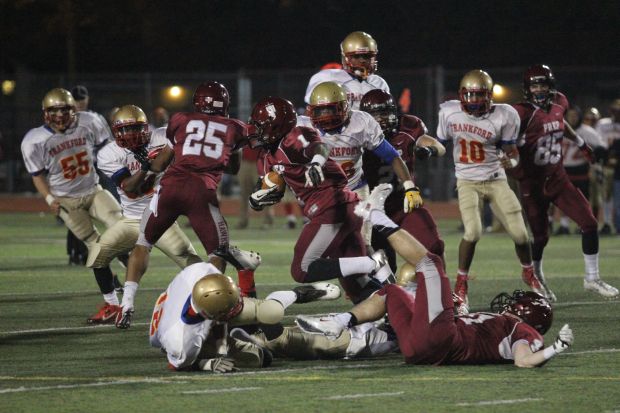 The St. Joseph's Prep offense ground out enough points for the Hawks to prevail in the District 12 championship, 10-7, over Frankford High. (Sarah Webb) 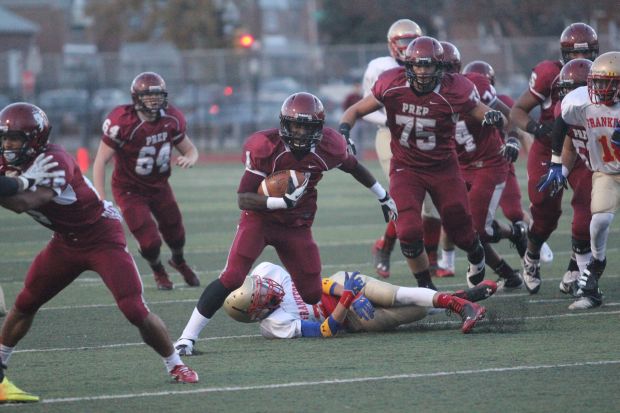 The Prep offensive line opens up a huge hole in the Frankford defense for running back Olamide Zaccheaus. (Sarah Webb)

That was close … too close.

Such was the initial reaction echoed by both players and coaches. But in the end, the only thing that mattered most was the following:

With the PIAA District 12 Class AAAA victory Nov. 16, played in front of a boisterous crowd at Northeast High School, the Hawks advanced to the state playoffs that get underway next week.

“I’m just relieved we won the game,” said Prep senior Vince Moffett. “That was a little too close for comfort.”

(See our photo gallery of the game here.)

The Prep (9-2) entered the game as a heavy favorite, playing against a Frankford team that carried a seven-game winning streak into what is known in local circles as the unofficial “city championship.”

In years past, the Catholic League usually coasted. Perhaps the Hawks would have won easily had they been at full health. Instead, Frankford (7-4) took advantage of a Prep offense that struggled to accommodate a change at quarterback.

In the Prep’s Catholic League championship victory over La Salle the previous week, starting quarterback Chris Martin injured his knee. So instead of clapping his hands in the huddle, he had to do so as he limped along the sideline in non-football Prep regalia.

Known as a true gridiron warrior, Martin was aching to contribute in ways much more tangible than just verbal encouragement directed at his teammates, namely junior quarterback Jack Clements, who faced the herculean task of starting his first-ever high varsity football game while simultaneously replacing one of the area’s best players in a pressure-packed spotlight.

With the offense only able to provide a first-quarter, two-yard touchdown run by Moffett behind blocks from juniors Jake Strain and Shane Davis, and a second-quarter, 27-yard field goal by senior Pat Walsh, the Prep’s defense needed to honor its reputation as a stingy all-around unit.

In the final seconds and in desperation mode, the Pioneers were able to reach midfield before two unsuccessful aerial attempts finally secured the triumph, thus allowing the Hawks’ faithful to fully exhale significantly later than they had planned.

“It wasn’t pretty, and we obviously didn’t play our best,” said Prep coach Gabe Infante. “But it doesn’t have to be pretty. We fought through some things and got the job done. I’m very proud of this accomplishment.”

While surrounded by Prep players, coaches, family, fans, and athletic director Jim Murray, a visibly proud Infante was presented with a modest trophy by two D-12 committee members and implored by them to bring home a state title.

Infante would like nothing more than to honor their wishes.
***

NEXT: Catholic football teams give thanks (mostly) during weekend games