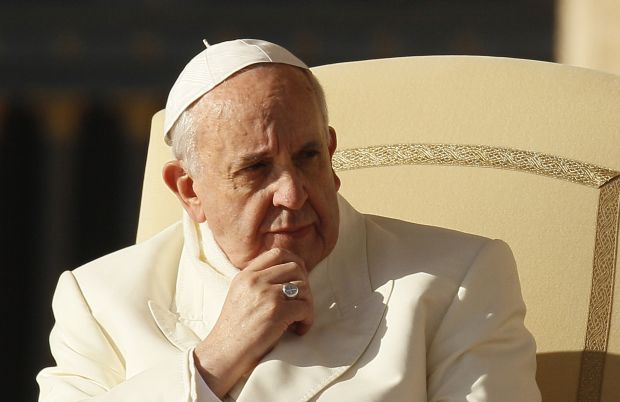 VATICAN CITY (CNS) — Pope Francis prayed that Catholics throughout the Americas would open their arms to the poor, to immigrants, to the unborn and to the aged just as Mary opens her arms to all.

Anticipating the Dec. 12 feast of Our Lady of Guadalupe, patroness of the Americas, Pope Francis said, “I ask all the people of the Americas to open wide their arms, like the virgin, with love and tenderness.”

Speaking in Spanish during his general audience Dec. 11, the first pope from the Americas explained that “when Our Lady appeared to St. Juan Diego, her face was that of a woman of mixed blood, a ‘mestiza,’ and her garments bore many symbols of the native culture.”

“When the image of the Virgin appeared on the tilma (cloak) of Juan Diego,” the pope said, “it was the prophecy of an embrace: Mary’s embrace of all the peoples of the vast expanses of America — the peoples who already lived there, and those who were yet to come.”

Mary’s embrace, the pope said, was a sign that North and South America were called to be “a land where different peoples come together; a land prepared to accept human life at every stage, from the mother’s womb to old age; a land which welcomes immigrants and the poor and the marginalized in every age. A land of generosity.”

In his main audience talk, Pope Francis concluded the series of audience talks about the creed started by retired Pope Benedict XVI during the 2012-13 Year of Faith.

Meeting some 30,000 people in a sunny but frigid St. Peter’s Square, Pope Francis — suffering from a head cold and occasionally taking sips of a hot liquid — focused his talk on the creed’s profession of faith in “life everlasting” and in the last judgment.

In a certain sense, the final judgment is already underway because those who close themselves off to the love of the Lord and the love of their neighbors are saying they don’t want or need salvation, he said.

“This is where our responsibility comes into play,” the pope said. “In a way, we become the judges of ourselves by excluding ourselves from communion with God and with our brothers and sisters.”

The idea of a final judgment naturally sounds frightening, he said, but the Gospel tells people they don’t need to be afraid, just awake and aware.

“Salvation is opening yourself to Jesus. He will save you,” Pope Francis said. “We are all sinners — all of us are. Let us ask forgiveness. With the desire to be good, let’s ask him, ‘Lord, forgive us.'”

Another consolation offered by the Gospel, Pope Francis said, is that no one has to go it alone. The entire communion of saints — all the holy men and women who are already with God — are interceding for those on earth.

“We can count on the intercession and benevolence of our many elder brothers and sisters who have preceded us on the journey of faith, who have offered their lives for us and who continue to love us in an indescribable way,” he said.

NEXT: The pope’s ‘leftover’ ring