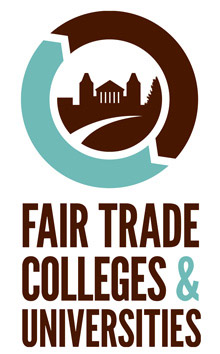 Cabrini College was named a fair trade college last month by Fair Trade Colleges and Universities in partnership with Fair Trade USA. Cabrini, located in Radnor, is one of only 17 colleges and universities in the United States to be recognized as such.

Fair trade is a global model that advocates for the purchase and sale of goods that were produced in an ethical and just manner.

Fair trade practices began at Cabrini in 2006, when student Meghan Hurley, class of 2007, worked with the college’s food service provider, Sodexo, to bring fair trade coffee to the campus.

Since then the list of fair trade items sold on campus has grown to include sugar, chocolate, bananas, teas, quinoa and rice, among others. Administrators, faculty, staff and students joined the efforts to make fair trade an established component of the college’s life.

“This is an extraordinary accomplishment that required extensive collaboration by many in our community over several years,” said Deb Takes, interim president of Cabrini.

Earning fair trade status formally acknowledges that Cabrini completed five steps, or “badges,” to embed fair trade principles and practices into the college’s policies and the social and intellectual life on campus. One of the badges requires schools to sponsor fair trade educational events and activities.

In spring 2013 Cabrini students formed a Fair Trade Club and rallied the campus to complete the final badge, a resolution that reflects the college’s commitment to fair trade, which Cabrini achieved through 800 signatures from faculty, staff and students.

The fair trade status supports the college’s Catholic identity and helps fulfill Cabrini’s Education of the Heart mission that calls for a commitment to social justice along with leadership development and academic excellence.

“Earning status as a fair trade college is just one more example — and a significant one — of how an Education of the Heart can be realized in every corner of life at Cabrini,” interim president Takes said.

NEXT: Two pilgrimages of faith offered in 2014