Even in wealthy county, poor people struggle for food 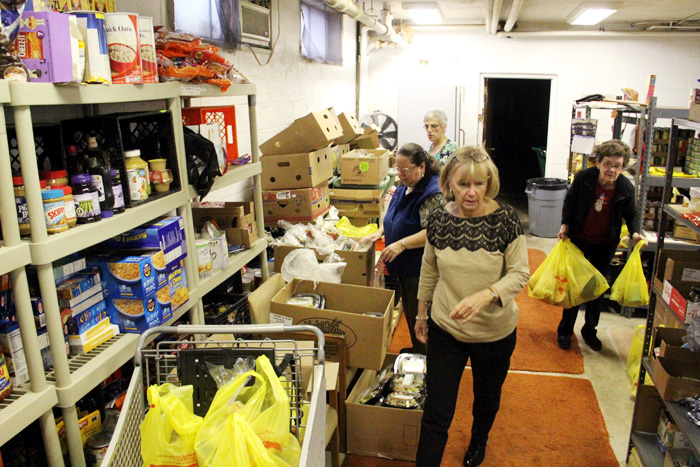 Almost a dozen volunteers work hard on days the food cupboard is open for pick up to fill bags and carts full of food for needy families. 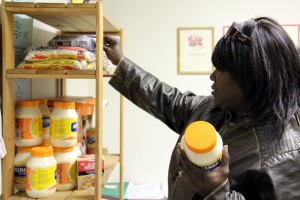 Joesahapa Montague choose mayonnaise and beans from the food pantry in Norristown.

Montgomery County, Pennsylvania, has the second highest income in the state, right behind Chester County. In 1910 the median was $40,076 per capita and median family $94,592. That makes it approximately double that of Philadelphia County where it was $21,117 per capita and $45,619 per family.

That doesn’t mean everyone in Montgomery County is rolling in money and if you want proof of that, check out the line outside of Catholic Social Service’s Montgomery County Family Service Center in Norristown on days when the Food Cupboard is open.

It’s a little bit like Willie Sutton, who said he robbed banks “because that was where the money was.” The Family Service Center is located in Norristown because that is where many of the poor people of Montgomery County live.

In November, according to the center’s administrator Elizabeth Peteraf, the site provided 46,582 pounds of food to 1,068 families composed of 1,908 adults, 1,887 children and 341 seniors. “Our numbers have gone up about 20 percent in the past year,” she said.

(See our photo gallery from a typical day at the food cupboard.)

Among the reasons for the increase, the cutoff point of eligibility for SNAP (formerly the federal food stamps program) is seen by social agency administrators as unrealistic, and it has gotten worse with the recent cut in federal allocation to the food program, without further cuts looming on the horizon.

The cost of food keeps going up and even if people get low paying jobs they still need assistance, Peteraf explained. One example she cited was a family with two small children where both parents recently found work but became ineligible for food stamps because they earned sufficient money to buy food for the month.

To fulfill a clearly growing need the service center relies on a number of food sources such as food markets that might have surplus foods, community groups including the North Penn Foundation, and especially Catholic parishes that either have a surplus of food in their cupboard or no cupboard at all.

Thanks to a grant, the Family Service Center was able to purchase $3,500 worth of produce at wholesale prices. “We distributed it free to 300 families. Each got a box of about 30 pounds of produce,” Peteraf said.

At Thanksgiving they also distributed about 300 turkeys. “One person said, ‘I’m going to have to refuse the turkey, my electricity got shut off,’” Peteraf recalls. “It was heartbreaking.”

In another instance the outcome was more joyful – one man confessed he simply did not have the means to purchase the Thanksgiving meal and was about to ask one of his daughters if she could get them a chicken. The donation of a turkey and the trimmings made their holiday complete.

The food distribution program operates with one full-time staff member and about 50 volunteers. “Volunteers do about 80 percent of the work,” Peteraf said. Just as important is the presence of a case manager on hand when the food is being distributed because the goal is not just to give people food, it is to assess them to see if they have other unmet needs that can be addressed.

“CSS envisions a food distribution model that is situated in an environment that is friendly and welcoming,” Peteraf said. “We believe we can create this by being deliberate and fair in our distribution of surplus food.  We can train volunteers and staff. We will educate people on nutrition and other issues around poverty such as budgeting and job skills. We will provide fresh food in addition to surplus food in a welcoming, pleasant environment.”

In the past with virtually all food non-perishable, it was virtually impossible to supply needy people with a truly balanced diet. That is beginning to change and at this point 50 percent of the food distributed the center is fresh, not canned or dry.

“While we as a group understand that there will always be folks in need of food supplementation, we are dedicated to the idea that no one in Montgomery County should go to bed hungry,” Peteraf said.

PREVIOUS: Catholic women celebrate their gifts together at Convention Center

NEXT: To better feed the hungry, Catholic food program asks for help