Catholic women celebrate their gifts together at Convention Center 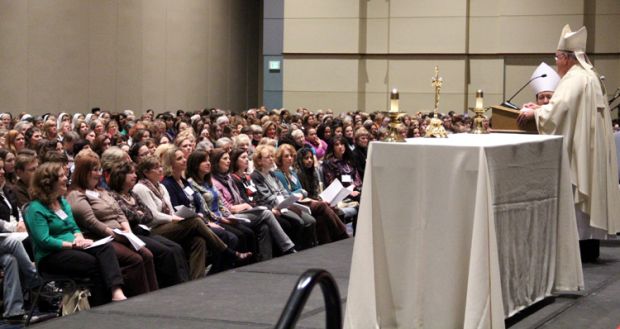 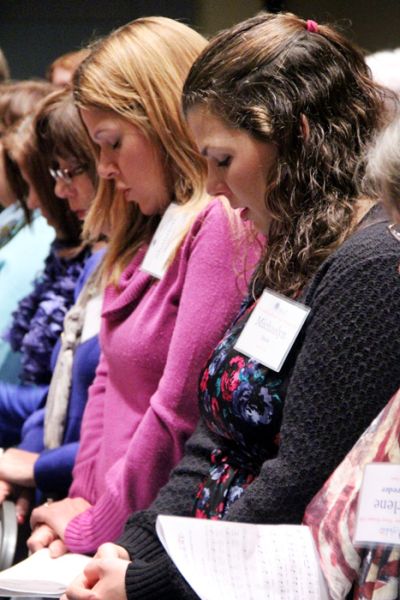 The more than 900 women attending the Catholic Women’s Conference prayed together, shared their experiences and learned from expert presenters about what Pope John Paul II termed the “feminine genius of women,” which was the theme for the day. (Sarah Webb)

With more than 900 Catholic women gathered in one place, a palpable positive vibe permeated the 2013 Catholic Women’s Conference that was held Dec. 7 at the Pennsylvania Convention Center.

Cosponsored by the Archdiocese of Philadelphia and Endow (Educating on the Nature and Dignity of Women), the day began with Mass celebrated by Archbishop Charles Chaput. In his homily the archbishop talked about Advent as a time of waiting and he encouraged women to “be attentive and pay attention to the Lord and look for Him in the needs of the Church, the poor and your families. If we wait attentively we will see the Lord.”

He emphasized the importance of vigilance “which is waiting with care.”

Archbishop Chaput described Advent as a time to “wait expectantly and with hope in God. Expectation is waiting with hope that God will listen. That is his promise to you: that he will come and intervene.”

(See a photo gallery from the conference.)

Those who attended the conference — married, single and consecrated religious women — were treated to an array of presentations by distinguished local and national experts on Catholic teachings. The presentations focused on the conference theme, “Feminine Genius: Every Woman’s Gift,” which is derived from Pope John Paul II’s Letter to Women.

He wrote that women have a genius all their own which is vitally essential to the society and to the Church. The pastoral letter addressed the dignity and rights of women and the challenges that women face in today’s society.

In addition to keynote presentations there were break-out sessions geared to teens, Hispanic women and religious sisters.

Immaculate Heart of Mary Sister Sheila Galligan, theology professor at Immaculata University, attended the conference because Catholic women “need to come together and celebrate the Church’s teaching about the role of women, especially the role of women in today’s society.”

“We need to rejoice in the gifts we have from God as women and think about how we can gift the world with that in positive and good ways,” she added. “I always like the quote from (St. Paul’s) Letter to the Romans, ‘Do not be overcome by evil but overcome evil with good.’”

For Gina Thomas, a member of Holy Cross Parish in Springfield, a highlight of the conference was having the opportunity to meet other Catholic women.

“I think these kinds of gatherings are nurturing for all of us who are proud to be Catholic women,” Thomas said. “The idea of being with other like-minded women was attractive to me. I’m just happy to be here.”

Emily McCarthy, a member of St. Maria Goretti Parish in Hatfield, learned about the conference from her mother who was familiar with Endow’s mission of educating Catholic women and teenage girls about their God-given dignity.

The conference “sounded like something I would really love,” McCarthy said. “As a mom of three young kids I just thought it would be great to come and be renewed.”

With her six-month-old son James bouncing on her lap, McCarthy added that she felt the conference was definitely needed in the Archdiocese of Philadelphia. “It’s great for women to be given lots of tools to go out and evangelize about the feminine genius.”

Stephanie Spinosa, a member of St. Joseph the Worker Parish in Fallsington and a senior at Nazareth Academy, participated in the youth track during the conference.

“The conference has been a wonderful experience,” Spinosa said. “As teenagers, it’s hard sometimes to practice our faith, but when we all come together it’s wonderful to share our beliefs together.”

Planning for the conference began about 14 months ago, according to Meghan Cokeley, director of the archdiocesan Office for the New Evangelization. “I think it was a beautiful day,” she said. “It was incredibly full of life. That was the sense I had seeing all those beaming faces.”

The next women’s conference is scheduled for Saturday, April 11, 2015 at the Sheraton Philadelphia Downtown Hotel on 17th Street in Center City.

NEXT: Even in wealthy county, poor people struggle for food