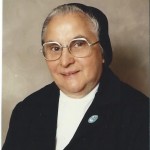 Sister Mary V. Cilurzo of the Religious Teachers Filippini, 93, died peacefully after a long illness Nov. 29 at St. Joseph Hall, the Home Healthcare Facility of the congregation in Morristown, N.J. She was 93.

Born in Soverato, Italy, Sister Mary came to America as a young child and lived in Syracuse, N.Y. She entered the Religious Teachers Filippini on July 13, 1949 and made her final religious profession on Aug. 17, 1953.

Sister Mary received an associate of arts degree from Villa Walsh College. She was a teacher in the primary grades and also was assigned in parishes where she did mission work.

Sister Mary taught the third grade at St. Nicholas of Tolentine School in South Philadelphia from 1977 to 1978.

She also served in the archdioceses of Newark, Hartford and Baltimore and dioceses in Pennsylvania, Maryland, New Jersey, Connecticut and New York.

Retiring at Villa Walsh in 1993, Sister Mary assisted in domestic responsibilities and dedicated time to prayer. She became a resident of St. Joseph Hall, Villa Walsh, in 2004.

The funeral Mass was Dec. 3 at St. Lucy Chapel, Villa Walsh in Morristown, N.J. She was buried the following day in Ave Maria Cemetery.

Sister Mary is survived by her two brothers, Vincent and Joseph Cilurzo and her two sisters, Anne Fitzpatrick and Nicholina Collar. She is predeceased by her parents Joseph and Maria (Viscomi).

NEXT: Father Burgoyne, a Dachau liberator, Shakesperian scholar and pastor, dies at 87