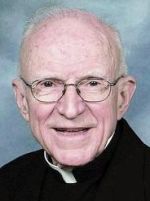 Upon graduation he entered the Army and following training was sent to Europe, where he mostly served as a German interpreter during the last year of the war and the occupation, recalls Bishop Louis A. DeSimone, himself a World War II veteran of the European theatre of operations.

“I was the first veteran to go into the seminary, and I was asked to welcome the others that came after me,” Bishop DeSimone said. “Sid was the most likeable fellow you would ever want to meet, with a wonderful personality. He didn’t talk much about his service; you had to draw it out of him. He was at one of the major concentration camps (Dachau) when it was liberated.”

Father Burgoyne continued his studies for a master’s degree in English at Notre Dame University and a doctorate in Shakespearian studies at Temple University. He served on the faculties of Cardinal Dougherty and Bishop McDevitt high schools and St. Charles Borromeo Seminary as an English teacher.

In 1984 he was named pastor of St. John Fisher Parish, Boothwyn, where he remained until he retired in 2000.

Mary Lou Sweeney, who was Father Burgoyne’s secretary at St. John Fisher, called him “a marvelous person, probably the most pious priest I have ever met. He was always a gentleman, always polite. He always kept us informed about what was happening in the parish. He was a listener and a priest in every way you would want a priest to be. The children loved him because he would get right down to their level.”

Father Kevin Gallagher, who was raised in St. John Fisher, said Father Burgoyne “was the inspiration, through God, of my own vocation. He was a very happy and faithful priest. No one was a stranger to him; wherever he went he would strike up a conversation with people.”

Father Joseph Quindlen, who was a close friend of Father Burgoyne and vacationed with him for many years in Puerto Rico, was the homilist at his funeral Mass. He remembered Father Burgoyne as a happy priest who, at times, had his own unique methods of evangelization.