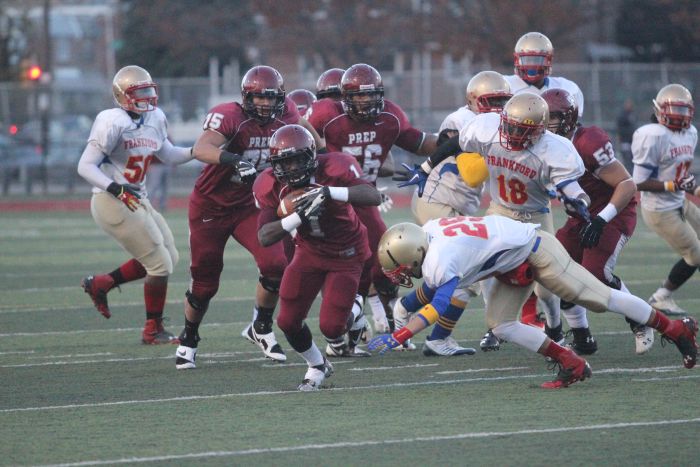 When people talk about the Catholic League as being one of the state’s most prolific all-around talent pools, it’s commonplace to receive a fair share of raised eyebrows.

But the bottom line is that this weekend will pit two Catholic League champions in separate state semifinal games, and regardless of opinions, that speaks volumes.

“There is a lot of pride,” said St. Joseph’s Prep junior lineman Jake Strain. “At this point of the season, every time you go out to play, you’re representing more than just your school. You’re representing all of the rest of the teams you played during the season.”

At 1 p.m. Saturday afternoon at Northeast High School, Strain and his Prep teammates will meet perennial juggernaut Neshaminy in a PIAA Class AAAA battle that will catapult the winner into the state championship game the following weekend in Hershey.

A few hours later, at 5 p.m. to be exact, Archbishop Wood will face Berwick High School in Allentown in the Class AAA semifinal. The game was originally scheduled for Friday night. The Vikings will be trying to advance to their third straight title game. They were victorious in 2011.

Should both the Hawks and Vikings emerge successful, it will provide significant evidence to those aforementioned eyebrow lifters that this year’s Catholic League is the state’s all-around best.

And, if you add this interesting tidbit, it could also be argued that the District 12, in which the Catholic League competes, might be the most loyal.

To advance to the state playoffs, the Prep had to defeat Public League champion Frankford. The Hawks did so, but in nerve-wracking fashion, a 10-7 victory that was clinched by a Prep defensive stand inside the final few seconds.

Among the Frankford players who suffered an excruciating defeat was senior starter Rene Herrera. Asked yesterday in impromptu fashion what team he will be rooting for in the state semis, Herrera didn’t hesitate.

“The Prep,” Herrera said. “They beat us, so now we want them to beat everybody else. We want them to make the most of beating us and representing us. The better they do, the better we were.

“The same thing with Wood. We didn’t play them, but they’re from our same district. We’ll be hoping they go all the way, too.”

Herrera said there would be a large group of Pioneers in the stands.

“We’ll be there making our presence felt,” he said. “Neshaminy is tough, but I think the Prep will find a way to win.”

The Prep advanced to this game by defeating Parkland, 21-10, in the state quarterfinals. Senior quarterback Chris Martin returned from a frightening knee injury sustained in the CL championship triumph over La Salle only a few weeks earlier to lead the Hawks.

Martin completed 12 of 22 passes for 239 yards and two touchdowns – a 48-yard toss to Olamide Zaccheaus and a perfectly lofted 29-yard connection to Justin Montague. Both scores occurred in the first quarter, and after freshman D’Andre Swift added a six-yard scoring jaunt in the second quarter, the Hawks relied on their staunch defense the rest of the way. Coming up particularly huge for the Prep was linebacker Ryan McNulty, safety Vince Moffett, and the aforementioned Strain.

Meanwhile, Archbishop Wood throttled a Parkway team that came into the game with a vaunted offensive attack but couldn’t do much against Wood’s stingy defense.

The 14 points allowed by the Vikings came with most of the first-team unit taking a much-deserved respite, courtesy of a 42-0 lead provided by six unanswered rushing touchdowns.

In addition to one touchdown by Jarrett McClenton (147 yards on 12 carries) and two by Joe Dutkiewicz, senior fullback Luke Spahits provided three scores.

Asked by several people about his career-best performance, Spahits echoed the same refrain.

“The offensive line makes all the holes,” Spahits said. “They’re the guys that make it work. They do the hard work and we follow their lead. They did a great job all game long.”

Spahits also lauded his teammates on defense that held Academy Park off the scoreboard until the end. The Vikings didn’t even surrender a first down until the second half.

“Our defense was amazing,” Spahits said. “That might have been the best they’ve played all year. They were ready from the beginning.”

“They execute better than any team I’ve ever gone up against,” he said.

Being from the Catholic League, that hardly seems surprising.

PREVIOUS: Catholic football teams give thanks (mostly) during weekend games