Our Lady of Grace rallies community for shut-ins

For a dead language, Latin is thriving in Northeast Phila. 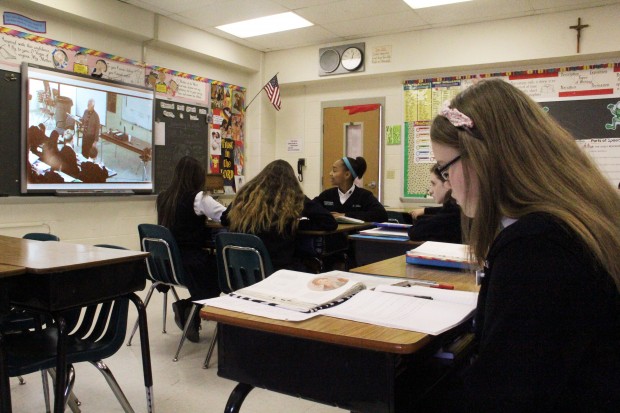 Eighth grade students of St. Cecilia School study Latin with their teacher and his class at Archbishop Ryan High School, about seven miles away, via video link projected at the front of the St. Cecilia classroom. (Sarah Webb) 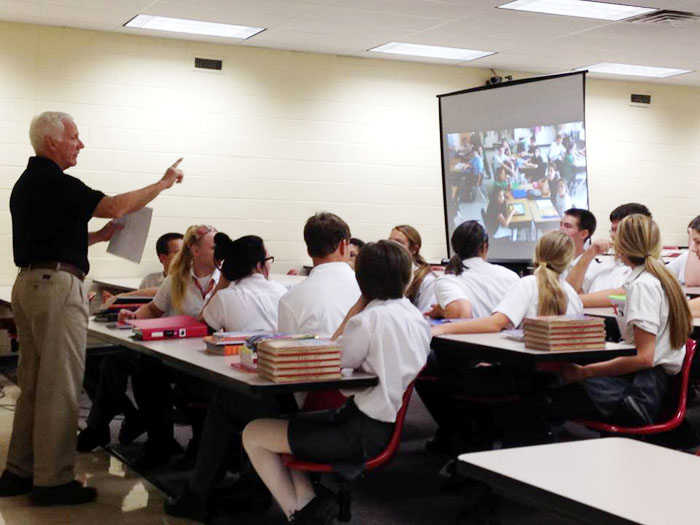 Latin teacher Robert Clothier teaches class for his Archbishop Ryan high School freshman and St. Cecilia students, all of whom can see, hear and interact with one another as they learn.

You could call it Spatio Discendi. At least that is how Google translates Distance Learning into Latin. Back in the days of togas and chariots the old Romans wouldn’t have had the foggiest notion what distance learning is, other than to possibly duck if someone was shooting arrows in their direction.

In a unique program today, 15 eighth-graders sitting in their classroom at St. Cecilia in the Fox Chase section of Philadelphia are studying Latin I along with 22 Archbishop Ryan High School freshman and juniors through a classroom lesson at Ryan.

Because there is audio and video it is totally interactive with students from both groups fully participating. Expenses for the program were covered by Ryan, which even supplied the Latin textbooks.

The program is the brainchild of Ryan’s Principal James Meredith. He was casting about for a way for the school to connect with elementary schools and thought that distance learning, where both schools participated, could be a way.

He happens to be a member of St. Cecilia Parish, which has one of the largest parochial schools in the city, especially since it has begun to accept kids from St. William Parish.

He approached St. Cecilia‘s principal, Immaculate Heart Sister Jane Mary Carr, who also saw the benefits of such a program. Latin was chosen because Clothier, who has 40 years teaching experience, volunteered to teach the class.

It also had the advantage in that regardless of their grade all the students would be starting from scratch, because none had previous exposure to Latin.

Because Latin is not usually taught on the elementary school level and the St. Cecilia students would be in a class with older students the course was not open to everyone.

As Sister Jane Mary explained, participation was limited to the students with the highest scores based on several criteria including 92 or above in English Language Arts, high Terranova scores and high general averages. Perhaps surprisingly, when the selected students were invited to join the program, almost every one of them agreed to do so.

Critical to the success of the program is Elizabeth Nestel, their English Language Arts teacher who is in the St. Cecilia classroom as moderator.

“Since 60 percent of our words come from Latin, we integrate what we learn from Mr.  Clothier in Latin class into English Language Arts,” she said. “Their knowledge of Latin roots and meanings develops our students’ foundational skills across all curriculums giving them a tremendous head start in preparing for the PSATs and SATs.”

The intriguing question was how well would distance learning students perform when compared to the students in the classroom with the teacher? So far, according to Clothier, there hasn’t really been a difference between the two.

“It’s amazing, on average there is just about a tenth of a point difference between the two groups,” he said. “Their grades have been pretty close.”

Clothier also teaches a Latin II course, but in recent years it’s been difficult to fill the seats. There was a time when if there were 35 Latin I students he would expect 35 Latin II students the next year.

Now many of the students do not take Latin as freshman or sophomores, but as juniors, and when senior year comes around their schedule may be too tight because of AP courses or if they are in a Diocesan Scholars Program.

Actually many of the students who do take Latin at Ryan are thinking about possible careers in law or medicine where knowledge of Latin is especially useful. It is Clothier’s hope that St. Cecilia kids who choose to attend Ryan next year will continue on with the Latin.

He does consider distance learning as something that is becoming commonplace, especially in higher education.

“I have a son and daughter who just got their master’s degrees from the University of Phoenix and they never stepped into a classroom,” he said.

While the students at both locations participate fully and equally, the Latin texts they study are different than those their grandparents might have experienced. Today instead of “Caesar’s Gallic Wars” or “The Orations of Cicero,” the text is “Behold the Romans,” which Clothier said covers the Roman family and everyday life. “The vocabulary is words that are used every day, it is not just about battles,” he said.

That is important because, as noted, one of the reasons Latin is still taught is because it is the ancestor to so many other languages, including to some extent English. An understanding of Latin gives a better understanding of English.

“I took Latin to help me with the SATs,” said Sal Ferrante, a Ryan junior. “Without a doubt it will help me with my vocabulary and I want to take it again next year. I have already taken Spanish, but I wish I had taken Latin first.”

Briana Cavalho, a Ryan freshman, observed, “Mr. Clothier is a good teacher. The St. Cecilia kids will have an advantage when they come to high school. I’m thinking of taking Latin II next year.”

As for the St. Cecilia class, Mya Coleman, Andrew Phillips, Max Rauchus and Jennifer Raskauskas all said the excellent teaching by Clothier has been a great experience.

Luke Cihak, Ashini Patel and Paulina Storck enjoy being in a class with high school students, which they believe is a good preparation for high school.

Brielle Piecyk was skeptical about taking the Latin class at first. “Now I look forward to it every day and I learn so much from it,” she said.

For Taylor Grabowski taking Latin “gives us all an insight into what learning a language is like.”

Ryan Doherty, Sean Dembeck and Molly McMonagle all see the rationale that learning Latin helps one with English. “It really expands my vocabulary and helps me to be a better writer,” Molly said.

For Max Rauchut the thrill was seeing a sign in Latin in church and being able to read it.

For Nick Hagan “Learning these fascinating new words feels like being transported to a whole new universe.”

Nick, Ashini, and Sean have already decided Archbishop Ryan will be their school of choice next year, which of course will make Principal James Meredith happy. 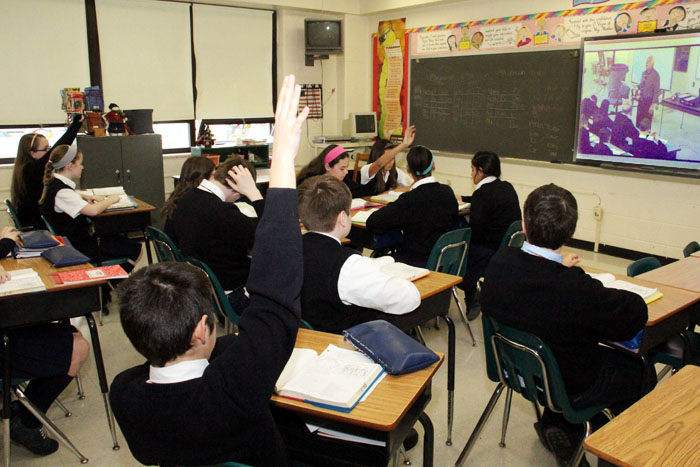