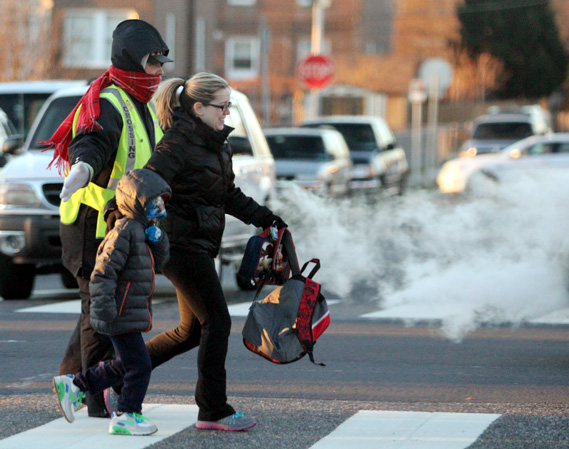 Anyone walking in the extreme cold that gripped the Philadelphia region found it a bracing experience, as one Philadelphia mom helps her child cross a street. (Photos by Sarah Webb) 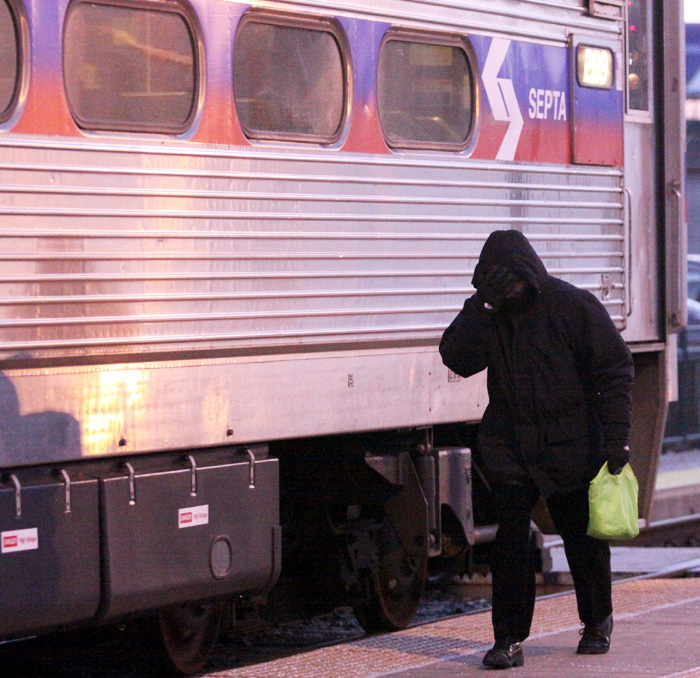 If the biting cold is hard for you going to and from your home, just imagine having no home at all.

That is the reality for homeless men and women in the Philadelphia region where the high temperature for Tuesday, Jan. 7 is expected to remain around 12 degrees, with wind chill factors near minus 20. Overnight, thermometers registered only single digits though with strong winds it felt much colder. The extreme cold is expected to persist through Wednesday morning.

Getting homeless people indoors is a priority during such dangerous weather, and Catholic Social Services of the Philadelphia Archdiocese was prepared to respond before the cold wave hit Monday night.

At CSS-run Mercy Hospice in center city, seven “winter beds” have been added at the home that currently hosts 29 homeless women and eight children.

“Morally we have to do what we can to help women,” said Amy Stoner, director of the Community-Based Services Division of CSS. “Seven beds doesn’t sound like a lot but seven women living in the streets – to not (offer them beds) would be unconscionable. To those seven women, it means a lot.”

Normally the women at Mercy participate in a recovery program where they leave for the day to meet with case managers and return to live at Mercy during the program. They sleep in beds, eat three meals a day and care for their children.

This winter the new beds allow women who may have stopped in to Mercy for a hot meal previously to stay for up to seven days, all day, while they seek permanent shelter. Such placement services in Philadelphia can be difficult. Homeless people wait in a “café-style” facility while they wait for a spot in a permanent shelter to open.

“The women are coming (to Mercy) from where they are sleeping on the floor, on cots or in a chair” said Yvonne Branch, program director of Mercy Hospice. And there are women and men in the facilities, which raises an issue of safety for women.

“We have one woman who is eight months pregnant” at Mercy, Branch said. “Now they have a roof over their head and food. And they can stay there all day.”

Mercy’s reputation among homeless women is sterling, CSS administrators say. Women who come for a meal during the day highly value the clean, safe home, and they are grateful to stay there during this cold snap even if temporarily.

“This is a place where they are not exposed, where they can come in while they are waiting and get a hot shower, wash their clothes, stay in safety, and sleep in beds,” Stoner said. “It makes them feel more human, to make it as comfortable and easy a transition as possible.”

At CSS-run St. John’s Hospice in center city, about 40 homeless men on a given day find safe shelter, three hot meals and a bed in which to sleep at night.

There is also the “coffeehouse,” a heated space where about 27 chronically homeless men who resist going into city shelters have been coming for more than a decade for a hot meal, use of bathrooms and a safe environment.

At this time they are also getting relief from the cold for the night and beyond.

“We’re constantly giving out warm clothes – hoodies, socks, wool hats, gloves,” said Kevin Barr, director of St. John’s Hospice. After Thanksgiving the hospice receives many donations of warm clothing from donors in the archdiocese, “and we try to move them all,” Barr said. 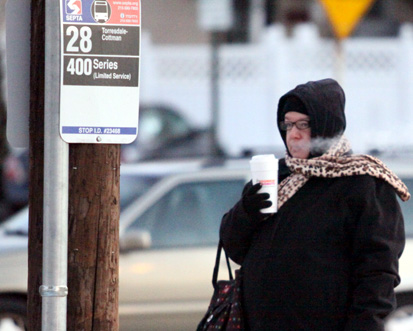 Coffee won’t stay long while waiting for a bus, as one woman does in Philadelphia Jan. 7. (Sarah Webb)

He believes the cold weather is compounding larger problems poor men on the streets are facing. “Our lines are getting longer” for the daily lunch program at the site, he said, with between 350 and 400 men in line on a given day.

The sluggish economy plus cuts to the federal SNAP program (Supplemental Nutrition Assistance Program, formerly called food stamps) are “impacting negatively on the men,” he said.

Barr praised “the good volunteers and our donor base” for giving clothes and food, including St. Charles Borromeo Parish in Bensalem where he picked up food Tuesday morning because the hospice’s truck had broken down.

He knows how hard it is for men trying to survive outside on a subway steam vent or in a doorway of a building.

“It’s so cold, you’re going to die if you’re out there just lying down,” he said.

In Chester City the CSS agency serves 75 to 80 men and women, including the elderly, who are homeless or in the Delaware County shelter system, according to Stoner. “The numbers there have increased dramatically,” she said.

CSS runs seven community-based outreach centers throughout the archdiocese, such as in Northeast Philadelphia where elderly residents enjoy a hot meal each day and stay for several hours.

Director Renee-Hudson Small emphasized her facility’s value for seniors in their community. During the cold snap, the center might be warmer than their homes and offer the only hot meal of the day.

“We’re getting people connected to resources, staying warm, getting food,” she said.

At Visitation Homes in the city’s Kensington section, the CSS program to transition women and children from homelessness to permanent housing is filled to capacity with 18 mothers and 31 children.

Program director Sara Frisby-Simms knows that at any Catholic Social Services’ site, “People are treated as people. There is bread on the table, and it’s family-style serving.”

That mission might intensify during nature’s harshest weather, but it continues throughout the year in any conditions. It’s something to remember when, in a few days, temperatures are expected to climb into the 50s again.

NEXT: Year-long Archbishop’s Lecture Series kicks off next month