Going to Mass should be a life-changing event, pope says at audience 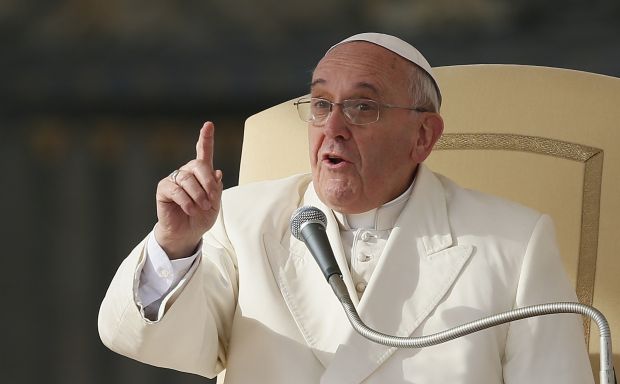 Pope Francis speaks as he leads his general audience in St. Peter's Square at the Vatican Feb. 12. (CNS photo/Paul Haring)

VATICAN CITY (CNS) — Going to Mass and receiving the Eucharist should make a difference in the way Catholics live, Pope Francis said; they should be more accepting of others and more aware of their sinfulness.

“If we don’t feel in need of God’s mercy and don’t think we are sinners, it’s better not to go to Mass,” Pope Francis said Feb. 12 at his weekly general audience. The Eucharist is a celebration of Christ’s gift of himself for the salvation of sinners, which is why the Mass begins with people confessing they are sinners and begging for the Lord’s mercy.

Continuing a series of audience talks about the sacraments, the pope asked people to think about how they approach the Mass and what difference it makes in their lives and the lives of their parishes.

Do you go to Mass because it’s a habit or a time to see your friends? the pope asked. “Or is it something more?”

“When we go to Mass, we find ourselves with all sorts of people,” the pope said. “Does the Eucharist we celebrate lead me to consider all of them as brothers and sisters? Does it increase my ability to rejoice when they do and to weep with those who weep?”

Pope Francis said it is not enough to say one loves Jesus; it must be shown in love for those he loved.

Ask yourself, he said, if going to Mass helps you reach out to the suffering or “am I indifferent, or am I gossiping, ‘Did you see how that one’s dressed?’ Sometimes people do that after Mass. But this shouldn’t happen.”

Attendance at Mass also should lead to “the grace of feeling forgiven and able to forgive others,” he said.

Pope Francis said he knows that some people wonder why they should bother going to church when the church is filled with people who sin like everyone else.

“In reality, those who participate in the Mass don’t do so because they think or want to believe they are superior to others, but precisely because they know they are in need” of God’s mercy, he said.

“We go to Mass because we know we are sinners and want Jesus’ forgiveness,” the pope said. “When, at the beginning of Mass, we say, ‘I confess,’ it’s not something pro forma. It’s a real act of penance.”

In the Eucharist, Jesus truly gives us his body and blood for the remission of sins, he said.

Celebrating the Eucharist also should make a difference in the way a parish community lives, he said. At Mass, Christ gathers people around him “to nourish us with his word and his life. This means that the mission and identity of the church begin and take form there.”

“A celebration could be perfect from an aesthetic point of view — it can be beautiful — but if it does not lead us to an encounter with Jesus Christ, it risks not giving any nourishment to our hearts and lives,” the pope said. There must be “coherence between our Eucharist and our lives.”

NEXT: She invited three to stand as godparents — now what?