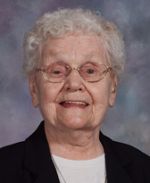 Sister Ann Nederostek, O.S.F., formerly Sister Marina, died Jan. 31 in Assisi House, Aston, at age 100. She had been a professed member of the Sisters of St. Francis of Philadelphia for 79 years.

Sister Ann was born in Fullerton, Pa., where she was a member of St. Mary Parish in Catasauqua. She entered the congregation in 1933 and professed her first vows in 1935. She earned a B.S. in education from Villanova University.

Sister Ann ministered primarily in elementary and secondary education. After her retirement, she worked as a library aide in several schools and as a hospital volunteer.

Sister Ann also ministered in the Diocese of Allentown for 35 years.

Her funeral Mass will be celebrated Thursday, Feb. 6 at 11 a.m. in Assisi House, 610 Red Hill Road, Aston. Burial will be in Our Lady of Angels Cemetery in Aston.

Sister Ann is survived by her nieces and nephews and by her Franciscan family. Donations in her name can be made to the Sisters of St. Francis Foundation, 609 S. Convent Road, Aston, PA 19014.