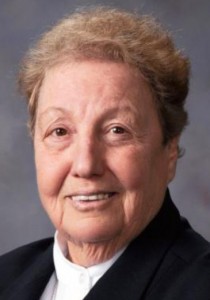 Born in Philadelphia, Sister Angela Joseph entered the Congregation of the Sisters, Servants of the Immaculate Heart of Mary in 1958 from Most Blessed Sacrament Parish in Philadelphia and professed her vows in 1960.

She taught in various classrooms for 30 years in the Archdiocese of Philadelphia.

She then served as superior and principal in schools in the archdiocese. Her last assignment as principal was at St. David School, Willow Grove. She then assisted at St. Dominic School in Philadelphia.

Sister Angela Joseph is survived by members of her religious community, two sisters, Geraldine (Charles) Oesterle and Carol (James) Albright, and other family members. She was predeceased by her parents, Joseph and Angela Manieri Coppola.