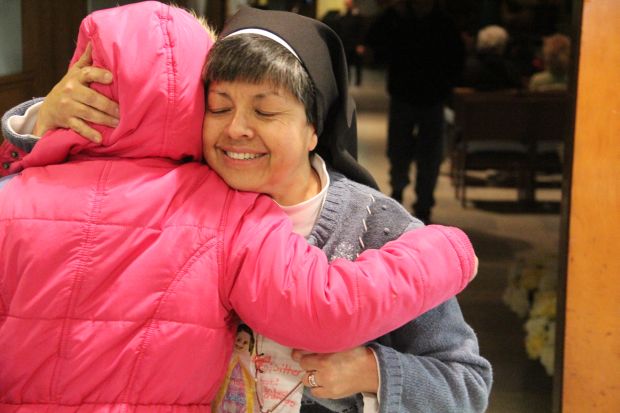 When Sister Sonia Avi was a young girl growing up in a suburb of Lima, Peru, she was taught in part by Sisters, Servants of the Immaculate Heart of Mary who were Philadelphians missioned to Peru.

Now as a Sister, Servant of the Immaculate Heart of Mary herself, she is missioned to the Archdiocese of Philadelphia, serving for the past three years as director of religious education at Our Lady of Fatima Parish in Bensalem.

In a way it is natural. Lima, after all, was the home of Saints Martin de Porres and Rose of Lima. Catholicism was in full-flower in Peru long before the Mayflower landed in North America.

But the country did need trained teachers. In 1922 at the request of Cardinal Dennis Dougherty, a group of sisters left Philadelphia for Peru, arriving Dec. 12, the Feast of Our Lady of Guadalupe. Their spiritual descendents are still teaching in South America, and now Peruvian sisters are returning the favor in the U.S.A.

This is important, Msgr. Deliman believes, because both are important parts of the parish, and the Latinos, who are mostly recently arrived Mexicans, Guatemalans, or Hondurans, turn to the Church for assistance in many ways. 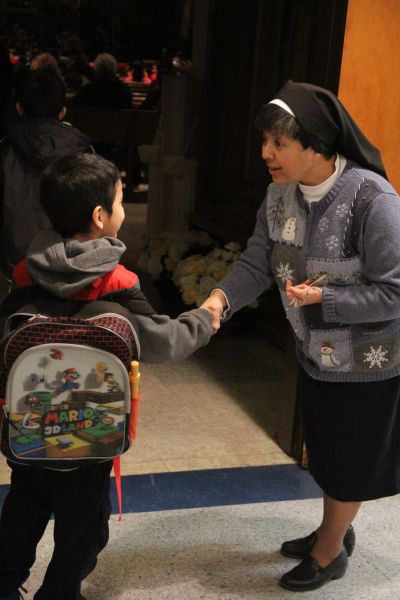 Her original intent was to follow in the footsteps of her own mother as a lay schoolteacher, but when the call to religious life grew within her she considered several options. First and foremost, she thought of the Immaculate Heart Sisters, but explored other options too.

“I was fascinated by the IHMs I met in my home town because they were so very much in touch with God,” Sister Sonia said. “Together they were able to make a great impact. They would bring us girls to prayers and for service and they would constantly be inviting us to be collaborators with them.”

Stumbling blocks for entry into the IHMs were the lack of a novitiate in Peru and the order’s requirement for a relatively long trial period before acceptance. She did not so much mind the wait, because it was a time of further discernment, but the idea of leaving her native land with geographic separation from her family was disconcerting.

In the end, she found encouragement from the American sisters, who adapted so well to Peruvian ways and spoke Spanish so fluently. If they could do that in her country, she reasoned, she could do it in their country.

Her English education at the time consisted of one period a week during her high school years, but during discernment along with spiritual exercise, she studied English two hours daily for three years.

With the blessing of her family she formally entered the Immaculate Heart Sisters in 1982, coming to the US with another young Peruvian candidate. She made her first profession in 1985.

Culture shock takes many forms. For example, living in a land where you cannot presume everyone is Catholic, being mindful of differences and careful not to offend others of different persuasions.

Also, she discovered American Catholics in their thinking are more like European Catholics than Latin American Catholics. For example, there was the attitude toward death. Americans might think Latinos are preoccupied with it; on the other hand, Sister Sonia was appalled by how lightly Americans seemed to take it. In her country it would be unthinkable to have a dinner after a funeral, and the mourning period would be much longer.

Sister Sonia was well aware that her life as an Immaculate Heart Sister would mean she could be missioned to many places. Intensive study of English served her in good stead; after formation she segued easily to the classroom, teaching fourth grade in Assumption School in Atco, and Incarnation School in Trenton, both in New Jersey.

She returned to Peru in 1988 where she taught high school and served as principal. She served in parish ministry in Chile for four years.

Although most of her ministry as a sister has been in schools, she enjoys parish ministry as a different challenge, especially because her work is both in the English and the Latino community.

“Our Lady of Fatima is a place to learn what Church is all about,” she said. “This struck me right away. It takes a lot of energy going back and forth between two cultures. I would have somebody speaking to me in English then someone who rings the bell asks me something in Spanish. I have to be respectful of this and now I am comfortable with it. I think a gift I bring to the parish is to bring people together. That is what the sisters taught me to do.”

The parish is really a bridge between two cultures, and it is Sister Sonia’s task to help the newcomers cross it while also preserving their own traditions. In her CCD class at this time, there are 262 children, and only five of them speak English as their first language.

“It is mostly a Mexican community and of course it is different than my own (Peruvian) community,” she said. “They are go-getters; their faith is number one, regardless of anything else. The families are mindful their children are going to be American. They are very good at going in and out of cultures.”

Sister Sonia has been a teacher, a principal and a DRE. But first and foremost she is a Sister, Servant of the Immaculate Heart of Mary with all it entails. She is a member of a community of seven Sisters at St. Charles Borromeo Convent, Bensalem.

Her schedule as a DRE has her working mostly afternoons and evenings, while the rest of the sisters work mostly during the day. She participates in Morning Prayer with the community and whenever else her schedule permits, and is actively involved in the various activities of the convent. “My quiet time is mostly in the morning,” she said.

“Sister Sonia is a very wonderful person, committed to her ministry and helping out here at St. Charles,” said Sister James Kathleen Cofer, principal of St. Charles Borromeo School. “It is not just Our Lady of Fatima; she has helped us with our RCIA.”

When Our Lady of Fatima School closed, some of the Latino children transferred to St. Charles, and Sister Sonia has been especially helpful in translating for parents when needed, Sister Kathleen James noted.

“She has a lot of energy, a joyful spirit and is committed to all facets of the faith,” she said.

NEXT: Black, Catholic and proud