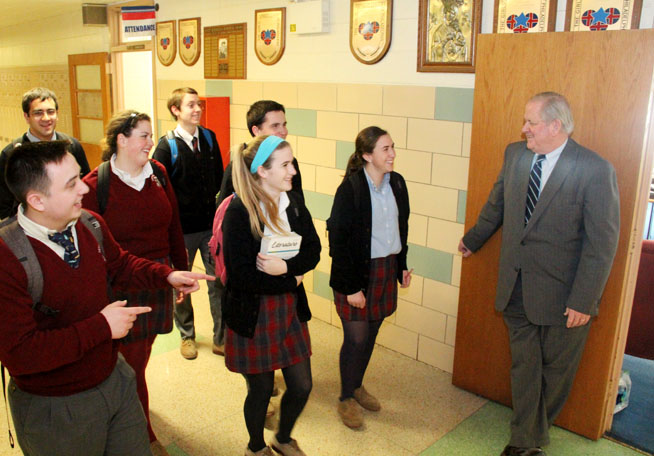 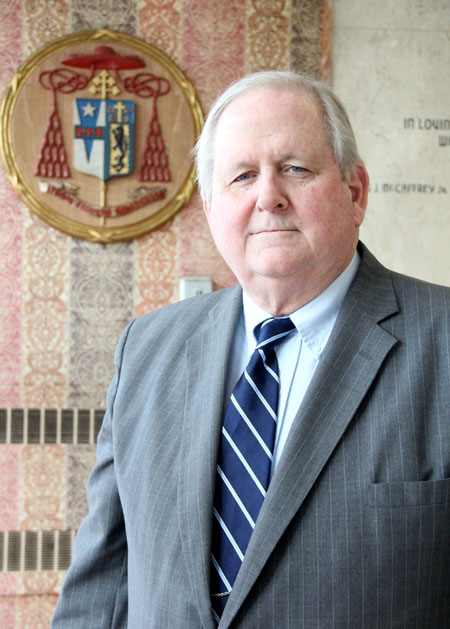 It’s hard to think about Cardinal O’Hara High School, Springfield, without thinking about Dr. William J. “Bill” McCusker, who off and on, has spent 31 years there as teacher, principal and president.

This long chapter in the half-century history of the school will come to an end this June when he retires.

Beginning with the 12 years he spent as a student at St. Philomena School, Lansdowne, and Monsignor Bonner High School, Drexel Hill, virtually his entire life has been connected with Catholic education.

The only break was his four undergraduate years spent at Syracuse University, which is understandable, because he was there on a crew scholarship.

His degree, which he obtained in 1967, was in history because, “I always pretty much knew I would go into teaching,” he said, and “I went into Catholic education because I thought I owed something back; I had gotten a good Catholic education, so I owed them. I would return the favor.”

He started out at West Catholic High School for Boys and over the next decade he taught AP U.S. history, AP European history and rose to head of the History Department. This is where he first met and became friends with another young lay teacher, Joe McFadden, the future Bishop Joseph P. McFadden.

Meanwhile very early in his teaching career, he married his wife Judy and over the years they raised five kids – Colleen, Kelly, Kristen, Patrick and Katie; and most of them are proud O’Hara grads. If their names suggest to you Bill is somewhat proud of his Irish heritage, you’ve got it right.

In 1974 he received a Master of Education degree in curriculum and instruction from Temple University.

He moved over to Cardinal O’Hara initially to head the Social Studies Department and later as assistant principal for student services.

“I was here for 10 years and then I became principal of Archbishop Kennedy High School,” he recalls. “I really thought I would stay at Kennedy.”

In 1990 Bill was temporarily borrowed by the archdiocesan Office for Catholic Education to head the Government and Community Affairs Division. The real task was to oversee the push for vouchers for non-public schools. “It was a good fight but the time was not right,” he recalls.

After two years he returned to Kennedy, but after a year Kennedy was merged into Kennedy-Kenrick, and Bill had to relocate.

This was 1993 the same year his old friend Joe McFadden, by then Msgr. McFadden, was named to the newly created office of president of Cardinal O’Hara High School, so he asked for the job of principal, and it was granted. In 2001 he succeeded Msgr. McFadden as O’Hara’s second president.

Looking back over the years and the accomplishments thereof, Bill said, “we refurbished the whole building, we redid the auditorium, we put a sports complex out back with a multi-purpose field and we just redid the gym with new lighting and seats.”

None of that is really important, “it’s our kids and our parents,” he said. “Cardinal O’Hara is people not buildings.”

Certainly things have changed since he was young. “There are more societal demands on kids, and one of the biggest changes is the social media. I think that is the problem and a distraction for kids. There are a lot of pressures on them now.”

There is a need to get a broader base of support for Catholic education and parental and community involvement, he emphasizes.

“I believe people should send their children to Catholic schools because of the moral training they get,” he said. “Kid needs that direction.”

But all of that will be the challenge for a new president. He doesn’t intend to look over that person’s shoulder to tell him or her what to do.

As for himself, as he approaches 70, he will have more time for his nine grandchildren, for walking which is his favorite relaxation, and maybe pull out some of these model trains he has been saving. Probably there will be a little involvement with education somewhere.

“I think Catholic education will go on, and yes, it has been a good ride,” he said.