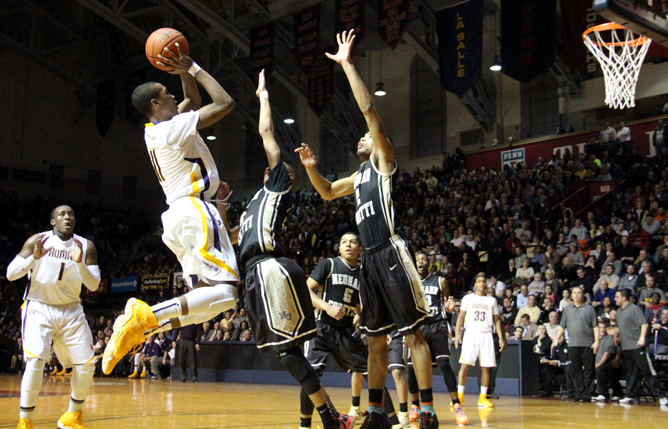 A Roman shooter finds that even taking a shot far from the basket won't go uncontested by Neumann-Goretti's defense. (Sarah Webb) 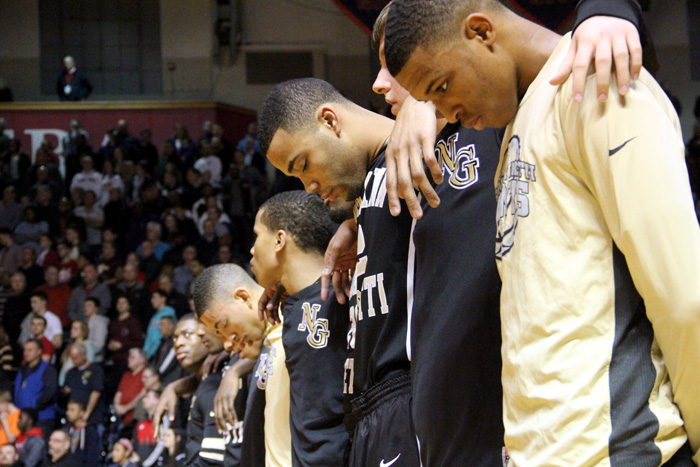 Neumann-Goretti teammates pray together before the championship game at the Palestra — an enduring trait of Catholic League sports. (Sarah Webb)

In the final seconds of the first game of a Catholic League championship doubleheader at the Palestra, a horde of rowdy fans from Roman Catholic began chanting, “We want Neumann. We want Neumann.”

Careful what you wish for.

With Miami University-bound senior Ja’Quan Newton strapping his team on his broad shoulders, Neumann-Goretti defeated Roman Catholic, 53-48, on Feb. 24 in front of a jam-packed and raucous Palestra.

While Roman’s fans were more vocal and creatively attired than N-G’s, it wasn’t enough to prevent the Saints from snaring their sixth-consecutive Catholic League title, eighth in 10 years, and 10th since Carl Arrigale took over the program 16 years ago.

(See a photo gallery and watch a video of the Catholic League boys and girls championship games.)

“They’re all special,” said Arrigale, who tied former Roman mentor Dennis Seddon as the all-time leader in CL coaching championships. Seddon coached from 1987 through 2008. “You look around and see a lot of players from the past. It’s a great thing.”

This victory was achieved in typical Neumann-Goretti style. The Saints showed signs of winning by a large margin, but a careless turnover or ill-advised shot selection kept Roman Catholic alive and, for a short time, planted in the proverbial driver’s seat.

Midway through the third quarter, Roman senior Rashann London (22 points, constant effort) helped the Cahillites forge a 33-28 lead, and it seemed as though the Saints were reeling. But a few blinks later, Neumann-Goretti scored the next eight points and led, 36-33, after three quarters.

In the fourth, Newton simply took over. He tallied nine of his game-high 23 points on the strength of five three throws, one mid-range jumper and a battle inside that resulted in a pretty kiss off the front rim.

“The best time of the game is the end,” said Newton, stopped several times by young lads seeking an autograph. “It’s exciting. You have to play your game and have confidence in your abilities and your teammates.

“Roman got close, but we buckled down. I wasn’t nervous. We’ve been in close games all year. I just go out and play.”

Among teammates that feel fortunate to have Newton wearing their jersey is Custis, a senior forward and a graduate of St. Thomas Aquinas in South Philadelphia who netted 12 points, including the first six of the game.

Custis said it was N-G’s defense that paid the most dividends.

“We know how important it is,” Custis said. “People talk about our offense, but it’s really what we are willing to do on defense that gets us our wins.”

That and incredible stamina.

“We run a lot of suicides in practice,” said senior Troy Harper, who scored 10 points. “We run and run and run. It’s crazy. And we put a lot of work in the gym. That started over the summer. A bunch of us got together at six in the morning. This is when it all becomes worth it.”

Arrigale has preached defense and stamina throughout his career.

“We don’t spend a lot of time stopping practice to talk about this and that,” Arrigale said. “We play. We play up and down the floor with very few breaks.”

Might not seem pretty. But it’s impossible to argue its success.