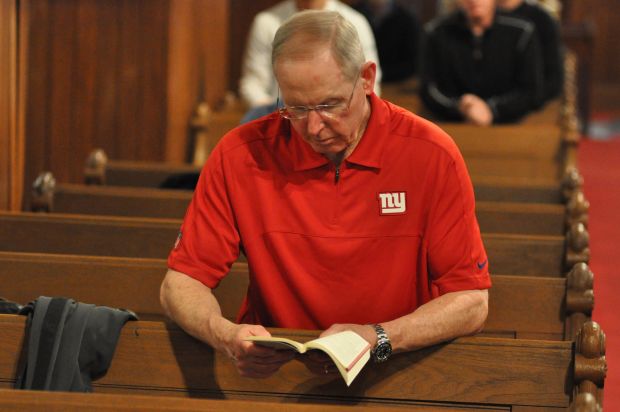 INDIANAPOLIS (CNS) — Coaches, scouts and front office personnel from all 32 National Football League teams have gathered in mid-February in Indianapolis for years for several intensive days of analyzing hundreds of top college football players who are eligible for the NFL draft, which starts May 8 this year.

It’s called the NFL Scouting Combine and involves the players participating in a series of drills and interviews. With more members of the media attending the event each year, players and team coaches and officials also participate in several high-profile news conferences.

But while the hustle and bustle of the Combine continued at Lucas Oil Stadium in Indianapolis, more than 100 Catholic coaches and other team officials stepped away to spend time in prayer and fellowship.

They gathered late in the afternoon of Feb. 22 at St. John the Evangelist Church, just a few blocks from the stadium, for Mass and a meal together afterward in the parish rectory.

“I was honored to be in there as I looked around the church and saw everybody,” said Baltimore Ravens head coach John Harbaugh. “And the fellowship afterward has been incredible, sitting down with the coaches and breaking bread. It’s been awesome.”

Norbertine Father James Baraniak, chaplain of the Green Bay Packers for the past 17 years, was the principal celebrant of the Mass.

In his homily, he told the NFL leaders before him that each Mass includes both an affirmation and a challenge from Jesus.

“Christ loves us so much — affirmation — that even right here and right now he’s willing to be broken and poured out for us, modeling who we are called to be for one another, equally broken and poured out,” Father Baraniak said. “And that’s the challenge. Are we living up to it?”

The priest later said that NFL team leaders have to know “when to hug and pat on the back and when to kick in the butt, but always, always, always to build up and to never tear down.”

Ultimately, Father Baraniak challenged his listeners to embody in their work the Lord’s kindness and mercy, which were praised in the liturgy’s responsorial psalm.

“Our fulfillment, our lifeblood, our success, our very salvation depends on that — the Lord’s kindness and mercy,” he said. “And it begs the question of every one of us in this church. To what degree are we kind and merciful?”

The Mass and dinner were co-sponsored by the Jack Del Rio Foundation, the Knights of Columbus and Catholic Athletes for Christ.

Ray McKenna, founder and president of Catholic Athletes for Christ, said it has helped to organize the NFL Scouting Combine Mass for the past eight years because of the difficulty of Catholic team officials getting to Mass given the busy schedule of the weekend.

“It’s a chance for them to gather together at a Mass as a family and to interact with each other and then break bread together,” McKenna told The Criterion, newspaper of the Indianapolis Archdiocese. “They’re united in their Catholicism. It’s a chance they don’t otherwise have during the season.”

Some front office personnel and coaches, such as Harbaugh, have been part of the NFL family for many years.

They know that it has many ups and downs, and that faith can steady them in the uncertainty of their profession.

“It’s a foundation, an anchor for the players, coaches, the organization. To me, that’s where everything starts in our whole program.”

Ben Steele also attended the Mass and dinner. But unlike Harbaugh, he is entering his first season as an NFL coach, serving as the offensive quality control coach for the Tampa Bay Buccaneers.

Yet he knows already that there are no promises of a bright future in the NFL. He was not drafted after attending Mesa State College in Grand Junction, Colo., and fought to make his way onto an NFL roster.

Steele’s Catholic faith helped him during his six-year NFL playing career. He knows that it will be there for him as he begins his career as a coach.

“If you have a rock to lean on in your Catholic faith, God is always going to be there,” Steele said. “And you have fellow coaches who share the same faith and values as you that you can lean on. That’s a huge benefit going forward. And as a young coach, it’s definitely encouraging for me because it’s not an easy business. But my faith is always going to be strong.”

Father Tom Belleque, a priest of the Archdiocese of Seattle and chaplain for the Seattle Seahawks, was a concelebrant of the Feb. 22 Mass. He said seeing so many Catholics from so many teams was a “hopeful sign” about “how many Catholics are out there” helping to lead NFL teams.

With the NFL’s prominence in American culture, Father Belleque said that Catholic players, coaches and team officials are in a prime position to spread Gospel values to the broader public.

“Our guys do it by the quality of the lives that they live,” Father Belleque said. “That’s their testimony. They’re preaching with the choices that they’re making, and the example that they’re setting.”