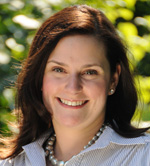 CatholicPhilly.com correspondent Meg Kane is assisting the delegation from Philadelphia during its trip to Rome to discuss with Vatican officials, and Pope Francis, the World Meeting of Families event in Philadelphia in September 2015. Kane is vice president of the public relations firm Brian Communications. She filed this reflection Sunday, March 23 and will be posting to social media throughout the trip – follow us on Twitter at #catholicphilly and Facebook at facebook.com/catholicphilly.
***

Visiting Rome has been a lifelong dream and no doubt, it has exceeded expectations in just 48 hours.  But as a Catholic, there was a personal part of this experience to which I looked forward, especially in Lent – attending Sunday Mass.

Luckily, across from my hotel is Santa Maria sopra Minerva – a church that from the outside looks quaint. Its flat front, white stucco and hunter green doors seem almost unassuming in the small Piazza della Minerva right near the Pantheon.

But then, you enter.  And you are keenly aware that this is a holy place – and has been for centuries.

To give you a sense of it, St. Catherine of Siena (one of the great saints of Italy with St. Francis of Assisi), Popes Urban VII, Paul IV and the Medici popes, Leo X and Clement VII, are all buried here. It is awe inspiring with its frescoes and sculptures (including a Michelangelo).  Upon entering, one is immediately drawn to the flickering candlelight in front of a statue of Mary holding the infant Jesus, with crystal rosary beads softly cascading over her hands.

Upon arriving for Mass, I did as so many Philadelphia Catholics can identify with — I sat in the back, despite having plenty of pews available ahead of me. But, as I don’t know the language, I was concerned about missing my cues.  Leave it to me to be standing when I should be kneeling!

I listened and watched Mass more intently than ever before. I was enraptured by the ritual but also by my surroundings.  I kept thinking that around the world, millions of people were engaging in the same ritual in different languages.  At one point I looked down at my watch and realized that the early Mass at St. Paul Church in South Philadelphia would begin in close proximity to the ending of this Mass in Rome.  It was a true moment of connection with my faith.  No matter the language, we all begin and end Mass the same way – “In the name of the Father, and of the Son and of the Holy Spirit.”

But I must share my favorite part of the entire experience, which was at the moment where a sign of peace is extended.  I was seated alone in the back of the church. The priest said in his raspy Italian, “Let us offer one another the sign of peace” and a couple left their pew walking toward me.  As first I was startled.  I shouldn’t have been but I immediately thought, “Why are they walking toward me?”  The man approached me and extended his hand saying “Pace,” (Italian for “peace”).  And then his wife extended her handed saying, “Buongiorno. Pace” (“Good morning. Peace.”).  I stammered back at them in English, “Peace be with you” and both smiled, nodded and returned to their pew.

What a moment of grace and gratitude.  A couple who needn’t make me feel welcome did exactly the opposite.  And in that moment, language was no barrier.  We wished each other the same.  Their kindness extended – and the effort made to extend that kindness –is something that I will take with me as a wonderful memory of this trip.  It made Santa Maria sopra Minerva even more beautiful than it was upon entrance.

Today (Monday, March 24), the Pennsylvania delegation arrives, led by Archbishop Chaput, Governor Corbett and Mayor Nutter, for its meetings with the Pontifical Council for the Family and most importantly, Pope Francis, regarding the 2015 World Meeting of Families.

There will be extraordinary moments to share in the next three days – moments in which all of us can connect more deeply with our faith as the delegation prepares to ask Pope Francis to visit in the Archdiocese of Philadelphia next September. This is no small ask. But it is one ready to be persuasively and passionately made.

I look forward to sharing this important journey with you on CatholicPhilly.com.

PREVIOUS: The downsides to an easier SAT

NEXT: Balance of power in government is eroding