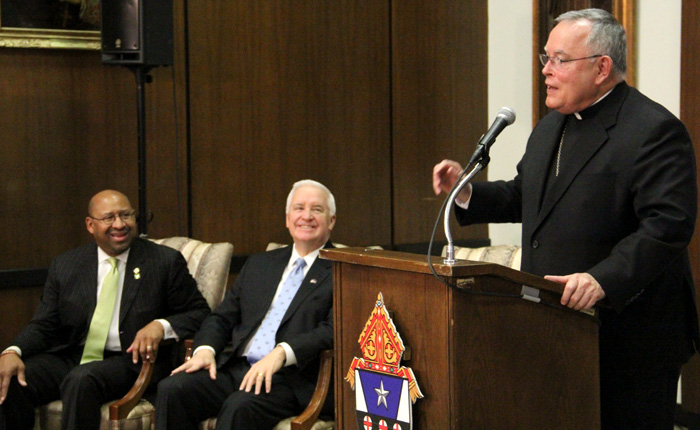 Archbishop Charles Chaput makes a point during a press conference about the 2015 World Meeting of Families in Philadelphia, with Philadelphia Mayor Michael Nutter (left) and Pennsylvania Governor Tom Corbett in attendance. The archbishop announced a delegation including the three men would travel to Rome later in March to meet with Vatican officials and Pope Francis to plan the event. (Photos by Sarah Webb) 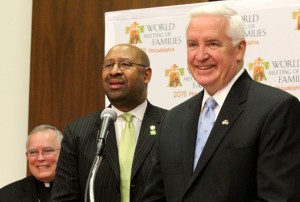 From left, Archbishop Chaput, Mayor Nutter and Gov. Corbett are all smiles as the announce plans underway for the World Meeting of Families to be held September 2015 in Philadelphia.

A powerhouse team of religious, civic and business leaders will travel to Rome in March to plan for the World Meeting of Families in Philadelphia next year.

Archbishop Charles Chaput led a press conference with Pennsylvania Governor Tom Corbett and Philadelphia Mayor Michael Nutter March 7 at the Archdiocesan Pastoral Center to announce they will lead a delegation March 24-26 to meet with Vatican officials to plan the international event. They will also have an audience with Pope Francis.

Throughout the press conference speakers told of their confidence that the pope will visit Philadelphia in September 2015 and vowed to personally convince him to make his first pastoral visit in North America to the city for the conclusion of the eighth World Meeting of Families.

(See a photo gallery here, and watch the full video of the conference here.)

“I plan to extend to the holy father a warm, vigorous and hopefully very persuasive invitation to visit our state next year,” said Corbett, who added Nutter and other members of the delegation would also “sell” the pope and Vatican officials on making a papal visit.

“It’s only in Philadelphia that folks talk about trying to ‘seal the deal’ with the pope,” Nutter quipped.

Pope Francis has not confirmed he will attend the last day of the meeting, which past popes have done.

Archbishop Chaput announced members of the leadership team planning the World Meeting of Families event, and they include some of the heaviest hitters in Philadelphia’s civic and business spheres.

Corbett said he expected perhaps 1 million visitors if Pope Francis celebrates the public Mass on Sept. 27, 2015, the concluding day of the event. The most recent such meeting in Milan, Italy in 2012 drew 1 million to that city.

Corbett also estimated the economic impact of the visit is “in the range of $100 million.”

Although Comcast’s Roberts and Cohen will not attend the meeting at the Vatican later in March, the other members and Archbishop Chaput, Corbett and Nutter will begin meetings March 25 with Vatican officials to plan logistics for the Philadelphia event.

Representatives of the Pontifical Council for the Family, which sponsors the World Meeting of Families every three years in a different city and of which Archbishop Chaput is a recently named member, will meet with the delegation March 25. Later in the day a press conference in Rome will include the archbishop and Archbishop Vincenzo Paglia, president of the council.

The following day the delegation will have an audience with Pope Francis, who was clearly on the members’ minds at the Philadelphia press conference.

Gov. Corbett invited people to pray that the pope would visit Philadelphia, while Mayor Nutter addressed the logistical and security challenges of handling the expected 1 million visitors or more

“There’s not a doubt we can do this,” Nutter said. “We do big events in the city of Philadelphia.”

Whether 1 million or 2 million people attend, “we want people to come. We will do whatever we have to do to make this a very successful and great event here in Philadelphia. You can take that to the bank,” he said.

As excited as the interested Catholics in the audience were about the prospect of the pope attending the event next year, Archbishop Chaput kept the focus on family life.

The World Meeting of Families “has the power to transform in deeply positive ways not just the spirit of Catholic life in our region but our entire community,” he said.

The meeting will run Sept. 22-27, 2015, and include three days of family gatherings, speeches and break-out sessions in a yet-to-be-announced space that would accommodate 20,000 people, the archbishop said.

Programs would include discussion of economic, psychological and spiritual issues facing families, among others, he said, though he added it was too early yet for specifics.

“We will talk about problems families have today, but we want to be very positive about the family,” Archbishop Chaput said. “We hope to have all kinds of ways of helping families avail themselves of grace and holiness.”

He said that the World Meeting of Families will need to raise significantly more than the $5 million already raised, but anything left over from the conclusion of the meeting will be given to the poor.

“I hope we can give make a gift to Pope Francis (for the poor),” the archbishop said. “That’s a great focus of his and I think he’d be very pleased with that.”

PREVIOUS: Come to Philadelphia: An invitation to the world’s families for 2015

NEXT: Press conference outlines plans for 2015 World Meeting of Families