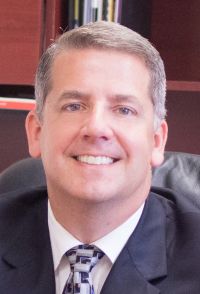 The archdiocesan Office of Catholic Education and Faith in the Future Foundation made the announcement Friday, March 14.

Fertal becomes the third president of the school and succeeds William McCusker, who has served as president since 2001 and will retire at the end of this academic year.

“I am humbled to have been selected as the leader of an institution with such a storied history as Cardinal O’Hara High School,” Fertal said. “From my interaction with representatives of the school, it is clear to me that there is a deep and genuine affinity for the school and for Catholic education within the O’Hara family.

“I look forward to the honor and the challenge of walking in the footsteps of the school’s first president and my former bishop, the late Bishop Joseph McFadden, as well as continuing the excellent work of Dr. William J. McCusker in serving the students, staff and families of the Cardinal O’Hara community.”

Fertal previously served in various leadership roles in the Diocese of Harrisburg since 1996, including principal at Lancaster Catholic High School since 2010. He holds a Bachelor of Science degree in administration of justice from the Pennsylvania State University, a master’s in restorative practices and education from the International Institute of Restorative Practices in Bethlehem, Pa., and is currently pursuing his doctorate in leadership from Alvernia University in Reading.

A devout Catholic, Fertal is a charter member and past grand knight of the Knights of Columbus Council 15028 in Elizabethtown, Pa. He is also a three-time presenter at the National Conference on Catholic Youth Ministry and a two-time global presenter on the topic of leadership at the International Leadership Association and International Institute for Restorative Practices.

Fertal and his wife of 19 years are the parents of six children.

Casey Carter, chief executive officer of Faith in the Future, said “leadership made all the difference in shaping Lancaster Catholic into the success story that it is today. We are just thrilled for the entire O’Hara community that Tom has agreed to join our team and bring all of his energy and enthusiasm for Catholic education to this great school. I can’t wait to see the great things he is going to bring to O’Hara.”